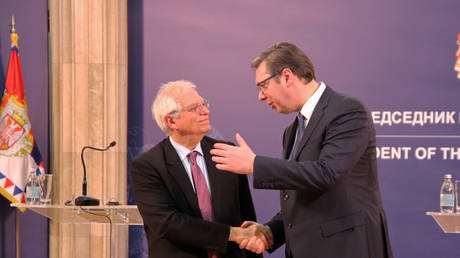 This is the achievement of Serbian diplomacy, President Aleksandar Vucic says

Belgrade has managed to convince seven nations to withdraw their recognition of Kosovo, Serbian President Aleksandar Vucic said on Saturday, addressing the nation. The president did not name specific countries that had told Belgrade they would do so but still praised the development as an achievement of Serbian diplomacy, demonstrating that Serbia enjoys the support of the majority of the world.

“At this moment, in my drawer and in the drawer of the Minister of Foreign Affairs, there are seven documents confirming Kosovo’s derecognition,” Vucic said during his address. He then said that Pristina in particular seeks recognition from Vietnam and Kenya, adding that Belgrade “also worked” with these nations. It remained unclear, however, if the positions of these two nations on Kosovo had changed in any way.

Instead, Vucic said that his nation’s diplomats “did not sit idly by” in the face of Kosovo’s “constant” attempts to win over the international community for its cause. “Now, the number of countries that have withdrawn their recognition has increased from four to seven,” he added.

Serbia’s foreign minister, Nikola Selakovic, said in May that four nations had withdrawn their recognition of Kosovo but did not name them either. These nations would be named when necessary, he said at that time.

Vucic made his remarks as Serbia and Kosovo reached a deal on freedom of movement. Belgrade agreed to allow holders of Kosovo IDs to freely travel to Serbia and Pristina said it would grant the same rights to the holders of Serbian IDs, including the Kosovo Serbs living in the northern part of the breakaway region. Vucic maintained that the measure was taken solely “for practical reasons” and does not constitute a step towards Pristina’s recognition by Belgrade.

The deal mediated by the EU followed weeks of tensions between Serbia and Kosovo. Certain issues straining relations between Pristina and Belgrade, including license plates, remain unresolved.

Less than a half of the UN member states have recognized Kosovo since the breakaway region unilaterally declared its independence from Belgrade back in 2008. Not all EU members recognize Kosovo either: Greece, Romania, Slovakia and Spain have not done this so far.

Out of the G20, 11 nations recognize it and eight do not. Those not recognizing the breakaway region’s independence include Russia, China, India, Brazil, South Africa, Argentina, Indonesia and Mexico.

Previously Belgrade has claimed it managed to convince 18 nations to withdraw their Kosovo recognition. The list of nations that allegedly did so, according to the Serbian authorities, mostly includes countries located in the Caribbean, Africa and Asia-Pacific region. Kosovo brushes off such statements as “Serbian propaganda.”