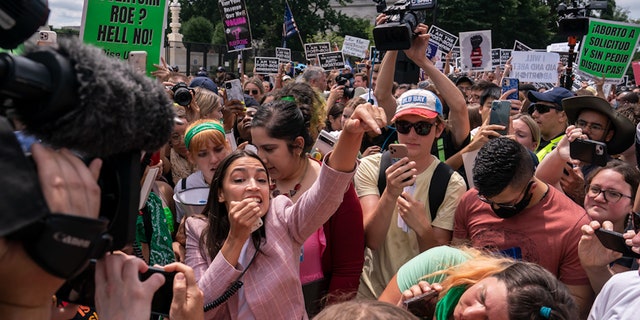 “I agree, it’s illegitimate,” one demonstrator told Fox News. “We just have to keep fighting, and we have to keep going.”

Asked by a crowd member: “What can you do in Congress?”

Ocasio-Cortez, a New York Democrat, responded: “I mean that’s the thing. We have to fill the streets. Right now, elections are not enough.”

Rep. Alexandria Ocasio-Cortez speaks to abortion-rights activists in front of the U.S. Supreme Court after the Court announced a ruling in the Dobbs v Jackson Women’s Health Organization.
(Photo by Nathan Howard/Getty Images))

“Volunteering for abortion access, making sure that everyone has financial access to abortions, to Plan B, to push for policies that are going to circumvent this destruction of our rights,” Julia said.

Another woman said she felt “what AOC probably meant” was that “we really need all kinds of state legislators and courts to act rationally and judge fairly and not judge in the partisan and corrupt way that the courts have been.”

REVELATION abt TRIBULATION OF THE SAINTS+THE SECOND COMING OF JESUS CHRISTI.TERRIBLE...

REVELATION abt TRIBULATION OF THE SAINTS+THE SECOND COMING OF JESUS CHRISTI.TERRIBLE...