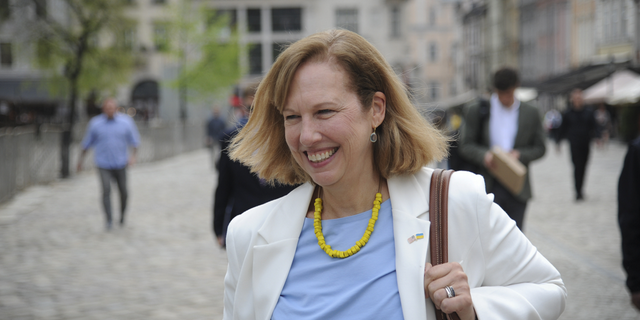 Acting US Ambassador to Fox: “Ukraine should win this war”

As the war rages in Ukraine, the Americans are back in Kyiv. After shuttering the embassy in February, a core group of diplomats returned ahead of a formal embassy re-opening later this month: the group lead by acting U.S. ambassador to Ukraine Kristina Kvien.

As the war rages in Ukraine, the Americans are back in Kyiv.

After shuttering the embassy in February, even before the Russians invaded, a core group of diplomats returned ahead of a formal embassy re-opening later this month: the group lead by acting U.S. ambassador to Ukraine Kristina Kvien.

With a number of high-level U.S. visits to the country in recent weeks, including by first lady Jill Biden, some have wondered whether President Biden should make a trip as well.

Acting United States ambassador to Ukraine, Kristina Kvien, smiles as she arrives for her press briefing in Lviv, Ukraine, on Monday, May 2.
(AP/Mykola Tys)

As new military aid packages for Ukraine get approved by congress and Biden, Fox News asked the acting ambassador how “offensive” the U.S. was going to get.

“We certainly we want to help the Ukrainians in any way we can to win this war,” she replied. “We believe that Ukraine should win this war.”

As good as Ukrainian forces are doing against the stronger and more numerous Russian foes, many experts now say this could be a long, drawn-out war. Some analysts worry about “Ukraine fatigue” among the western allies.

“I haven’t seen a lot of it,” remarked the acting ambassador, “One reason is because Ukraine’s cause is just… it is so just.”

As a seasoned diplomat, Fox asked Ms. Kvien, after all the horror that has happened in this country, whether Vladimir Putin’s Russia could ever be treated as a partner again.

“Under President Putin’s leadership, I think it will be impossible to go back to business as usual,” she noted. “He needs to pull out of Ukraine, he needs to stop committing war crimes, and he needs to become a responsible player on the world stage.”

Finally, Fox asked the diplomat for her first-hand impressions after being away for three months.

“I’ve been incredibly impressed and moved by the Ukrainians’ absolute conviction and their bravery,” she said. “Their willingness and resilience to fight the Russians everywhere that they attack.”

And the fight goes on.

Timothy Dixon Prophetic Dream – Trump got his authority back

8 Things to Look for in a Christian Guy | Christian...