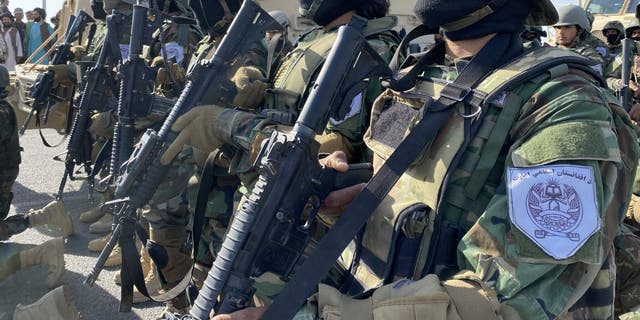 A blast struck a mosque at a government ministry building in Kabul, Afghanistan, Wednesday as workers and visitors were praying, a Taliban official said.

The afternoon explosion went off inside the mosque of the Interior Ministry, which is responsible for security and law enforcement in the country.

A Taliban-appointed spokesman for the Interior Ministry, Abdul Nafi Takor, said in a tweet: “Unfortunately there was an explosion inside a(n) ancillary mosque where some Interior Ministry workers and visitors were praying. Will share the details later.”

He did not say if the mosque was inside the ministry or near it. There was no immediate information about casualties and no immediate claim of responsibility.

The mosque blast follows last week’s suicide bombing at an education center in Kabul that killed as many as 52 people, according to a tally compiled by The Associated Press, more than twice the death toll acknowledged by Taliban officials.

Taliban fighters hold their weapons as they celebrate one year since they seized the Afghan capital, Kabul, in front of the U.S. Embassy in Kabul, Afghanistan, on Monday, Aug. 15.
(AP/Ebrahim Noroozi)

The reason for the lower death toll provided by the Taliban was not immediately clear. In the past, they have at times been slow to confirm casualty figures in the aftermath of attacks.

Taliban security officials initially said 19 people had been killed at the Kaaj Higher Educational Center, then revised the death toll to 25 over the weekend.

However, The Associated Press spoke directly to relatives of 39 of those killed and obtained the names and other information about the remaining 13.

Missiles strike US base in Syria – Pentagon — RT World News