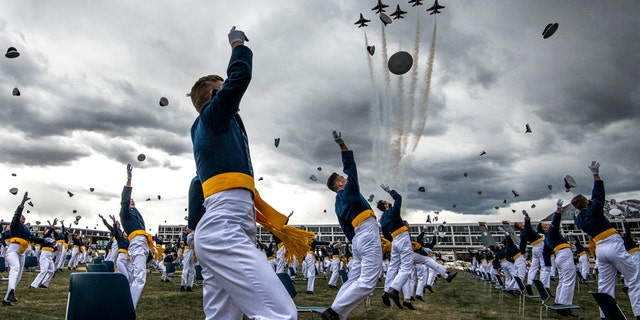 Three Air Force Academy cadets who the force initially said would not be allowed to graduate over their refusal to get vaccinated against the coronavirus will receive their degrees this month, but they will not receive commissions.

The Academy’s board conducted a “standard review” and recommended that the three seniors receive Bachelor of Science degrees, according to a press release from the school.

But the Academy also said they “will not be commissioned into the United States Air Force as long as they remain unvaccinated” and that Air Force Secretary Frank Kendall will determine if the graduates will be required to “reimburse the United States for education costs in lieu of service.”

And while the graduates will be awarded their degrees, they will not be permitted to attend the May 25 graduation ceremony.

AIR FORCE CADETS MAY NOT GRADUATE AFTER REFUSING COVID VACCINE

“That has been confirmed and is petty, vindictive, disrespectful and unnecessary,” attorney Mike Rose, who represents one of the unvaccinated cadets, told The Washington Times.

This comes after Air Force officials said earlier this month that four cadets may not graduate or be commissioned as military officers, and that they could be forced to pay back thousands in tuition. The fourth graduate opted to get vaccinated, and will now graduate and become an Air Force officer.

The Pentagon announced last year a vaccine mandate for service members, including for those at military academies.

FILE – This Friday, Aug. 10, 2007, file photo, shows the logo of the Department of the U.S. Air Force at the United Staes embassy, in Berlin. A new report issued Monday, Dec. 21, 2020, on racial disparities in the Air Force concludes that Black service members in the service are far more likely to be investigated, arrested, face disciplinary actions, and be discharged for misconduct. (AP Photo/Michael Sohn, File)

“To defend this Nation, we need a healthy and ready force,” Defense Secretary Loyd Austin wrote in an August memo. “After careful consultation with medical experts and military leadership, and with the support of the President, I have determined that mandatory vaccination against coronavirus disease 2019 (COVID-19) is necessary to protect the Force and defend the American people.”

The fairness of the military’s vaccine exemption reviews have been questioned by members of Congress, the military and the public, and multiple lawsuits have been filed over opposition to the mandate, centered primarily on the fact that very few religious exemptions had been granted.

The Marine Corps, Navy, Army and Air Force have discharged nearly 4,000 active duty service members over their refusal to get vaccinated. Recent data from the services shows that more than 2,100 Marines, 900 sailors, 500 Army soldiers and 360 airmen have been discharged. At least 50 service members were discharged during entry-level training.

Service members who have refused the vaccine without seeking an exemption are still being discharged while the discharges of those involved in lawsuits are held up amid the legal battles.

The military has said that as many as 20,000 service members have requested a religious exemption and that thousands of such applications have been denied.

About 99% of the active-duty Navy and 98% of the Air Force, Marine Corps and Army have received at least one dose of the vaccine.

Street Preacher ready to hit NYC streets with his message

yvngxchris – In Christian We Trust (Official Video) Directed by @CRATERMOON