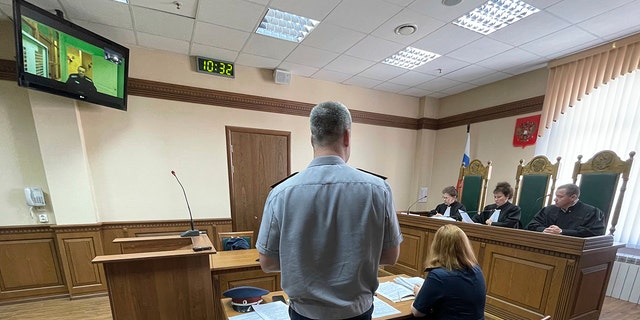 A Russian court has rejected an appeal by imprisoned opposition leader Alexei Navalny, who contended that prison authorities illegally prevented his lawyers from bringing necessary equipment including voice recorders and laptop computers to a court session held in a prison.

Navalny testified at the Tuesday session by video, the first time he has been seen since being moved to a maximum-security prison. A lower court had previously rejected his complaint about the recording devices ban.

Close associates of Navalny have faced criminal charges and many have left Russia. Authorities shut down his group’s political infrastructure — an anti-corruption foundation and a nationwide network of offices — by labeling it extremist.

On Tuesday, prominent opposition politician Ilya Yashin was sentenced to 15 days in jail on charges of failing to obey police. He was detained late Monday while walking in a park, and police said he had grabbed one officer by the uniform and vulgarly insulted them.

However, Yashin claimed that police approached him while he was sitting on a bench with a friend and demanded he go with them without explanation.

“I am not crazy, to get in a fight with three policemen,” he said on the Telegram messaging app.

Yashin has criticized Russia’s military actions in Ukraine and in May was ordered to pay 90,000 rubles ($1700) on charges of discrediting the Russian military.

He faces 15 days in jail if convicted of disobeying police.

Navalny was arrested in January 2021 upon returning from Germany, where he had been recuperating from nerve-agent poisoning he blamed on the Kremlin. He received a 2½-year sentence for allegedly violating the conditions of his parole while outside Russia.

In March, Navalny was sentenced to nine years in prison on charges of fraud and contempt of court, allegations he rejected as a politically motivated attempt by Russian authorities to keep him behind bars for as long as possible.

Why Is Most Christian Music So BAD? | The Catholic Talk Show