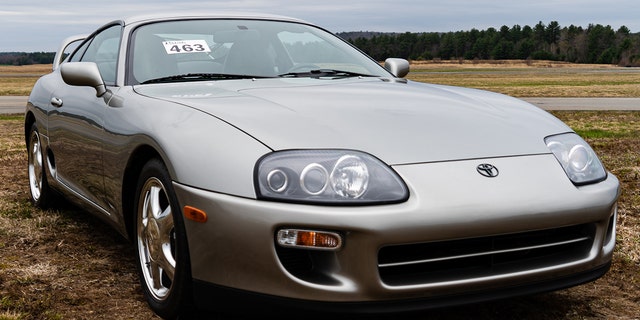 A rare 1998 Toyota Supra sports car owned by an alleged drug trafficker has been sold for an astonishing $308,725.

The silver coupe was among 29 vehicles seized by the Northwestern District Attorney’s Office in Massachusetts during its investigation into an illicit marijuana operation in 2020.

Cory Taylor, 41, had been charged with trafficking, but was found dead in an abandoned building several weeks after skipping an arraignment hearing. The cause of his death is still listed as “undetermined.”

Taylor’s fleet of cars, mostly from the 1990s and early 2000s, was found in two properties he owned in North Salem and Holyoke.

He owned a total of 13 Toyota Supras, which have risen in value in recent years, due in part to their prominent appearances in the “Fast and Furious” films.

Taylor’s cars were discovered in two properties, including this converted firehouse in Holyoke.
(Google Street View)

The car was a 1998 turbo with a six speed manual transmission and 22,962 on the odometer that was one of only 24 finished in Quicksilver paint. The high bid was $265,000, but the auction house handling the sale charges a 15% buyer’s premium.

According to The Drive, it was a record sale for a Supra, aside from one of the actual movie cars, which was auctioned for $550,000, including premium, by Barrett-Jackson last year.