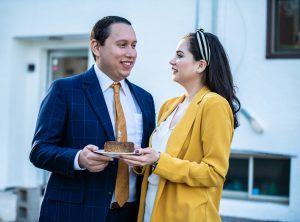 A married couple who both attended Mitchell Hamline recently opened what they believe might be the first law-themed coffee shop in the country. Using the Spanish word for “lawyers,” Abogados Café sits below the law office Inti Martinez-Alemán ’16 and Ofelia Ponce ’21 run in the Como Park neighborhood of St. Paul.

The idea for the shop was born from the pair’s own experience seeking out coffee, as detailed in a recent St. Paul Pioneer Press article:

While working in the office, they would have to drive a ways for coffee, and oftentimes from a chain coffee shop. Ponce has always loved coffee, so she thought starting her own café would be a great idea.

In order to rezone the property, Ponce and Martínez-Alemán had to collect signatures from neighborhood residents. Before even hearing the plans for Abogados Café, neighbors were saying “Oh, a coffee shop would be nice.” 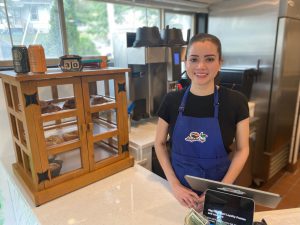 Ofelia Ponce ’21 at the counter at Abogados Cafe.

Martinez-Alemán and Ponce both grew up on Honduras and were high school sweethearts, according to the news site Bring Me The News:

The couple moved to Minnesota around four and a half years ago and founded Ceiba Fôrte Law Firm, where they serve Spanish-speaking clients in business, civil and employment litigation matters.

Opening a coffee shop was always a dream, Ponce said. A couple of years ago, she began envisioning a place where Latin American culture would be celebrated and the community would feel welcomed. 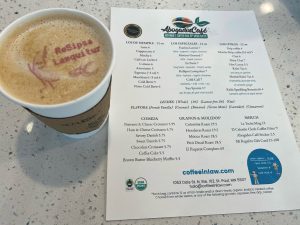 The law-themed menu at Abogados Cafe.

The café, at 1053 Dale St. N, currently only offers items for take-out, but there are plans to offer in-person seating soon. In addition to decorating the space with art and designs from Latin America, the menu offers a hat tip to their legal careers. Here, “motion granted” is a latte you can order with sweet coconut. Or, if you prefer cayenne and Ceylon cinnamon, try the “fearless lawtte.”

Read more about the shop, including hours.

Inti Martinez-Alemán also was interviewed earlier this year on the Spanish-language news outlet El Minnesota de Hoy about his life and career in the law: