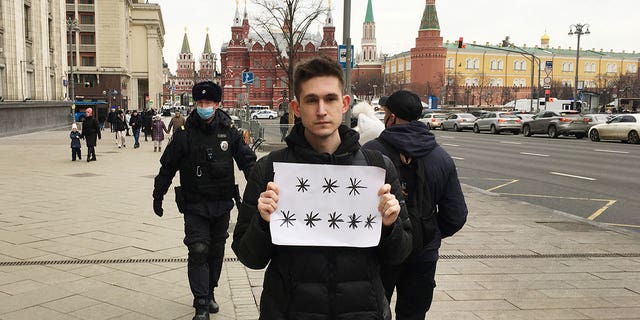 “One of my co-workers says she wakes up every morning and cries. And, at first, I had woken up each day hoping that I was dreaming, but then it went away. Now, I know for sure that it’s really happening, that people go missing,” Svetlana Gannushkina said over Zoom from Moscow.

When anti-war Russians are asked why they feel somehow responsible for the bloodshed in Ukraine, they don’t have easy answers. Their political hands are tied. But the sense among many is perhaps they didn’t push back hard enough against a system that has become increasingly anti-democratic.

RUSSIA SLAMS LONGTIME DIPLOMAT WHO QUIT OVER WAR IN UKRAINE: ‘HE IS AGAINST US’

Gannushkina, who still represents the recently banned human rights group Memorial and also runs an organization called the Civic Assistance Committee, has been doing what she can to help Ukrainian refugees who have arrived in Russia and those who are trying to locate lost loved ones.

“We have several statements from relatives that their men were not allowed through, and we can’t get information about where they’ve gone,” Gannushkina said.

Police officers, left, prepare to detain Dmitry Reznikov, who is holding a piece of paper with eight asterisks that could have been interpreted as standing for “No to war” in Russian. The Kremlin is in the background in Moscow March 13.
(SOTA via AP, File)

By “allowed through,” she means those Ukrainians who vanished after failing to pass “filtration” when they tried to cross into Russia. In many, if not most cases, Ukrainians do not want to move to Russia. But often there is no other way out. Reports are that some are all but forcibly bussed to the border. Some estimate that between 900,000 and 1.5 million Ukrainians have crossed into Russia since the war began.

Gannushkina told the story of one Ukrainian woman looking for her brother.

“Our soldier replied to her rhetorically, ‘What happened to them? I shot ten people, and after that I just stopped counting.’ And at that, he smiles. Was he joking? Is that his way of joking? Or is it the truth?” Gannushkina asked, visibly horrified.

She said she also has been very concerned about those Ukrainians detained in Russia whom Russian lawyers have refused to represent.

Gannushkina did say there are Ukrainians who’ve arrived thinking they will have a better life in Russia than they did in Ukraine. She chalked that up to the propaganda they’ve consumed on Russian TV. It reminded her of Ukrainians in Crimea who thought they would be much better off economically after Russia took over the peninsula than they actually ended up being.

For Gannushkina, hearing about “Russia to the rescue” has been distressing. She referred to a story of how the cries of Chechen fighters, known for their brutality and for having enthusiastically joined forces with the Russians, were music to one Ukrainian woman’s ears.

“That woman describes how they were in the basement and how they could not come out, and when at last in the yard, they heard ‘Allahu Akbar!’ they crossed themselves and realized that the Russians had come. When we hear this, it must be said, it is very hard.”

Gannushkina said she’s disheartened by the number of anti-war Russians who have left the country instead of sticking around to stand up to the powers that be. But many of those, including independent journalists who have settled in neighboring countries, said their usefulness has been continuing to write and report about this war – which they can’t do in Russia without running the real risk of going to jail.

Gannushkina said in her experience working with those who have been fined for “individual pickets” and activism, including her own, the courts have played hard and fast with facts and do the work of the government, whatever it takes.

Gannushkina said she believed most Russians have been against the war because war is, by nature, a bloody thing. But, she is not sure how the blame game shakes out.

Radio Svoboda did a series of interviews in recent days with Russians of all stripes. Men and women on the street spoke out, and there were all kinds of answers on both sides of the debate about the war in Ukraine. But, one woman’s words stuck out because they were particularly strong and fearless.

“War is the most frightening, the worst thing that can happen,”  she said, noting that people passing by on the street all appeared scared. “The fact that people are dying there — I cannot live in peace. What are we hoping to get from this? Better lives? Our lives will not be better. We’re all on our own now. Everyone hates us, and they are right to do so.