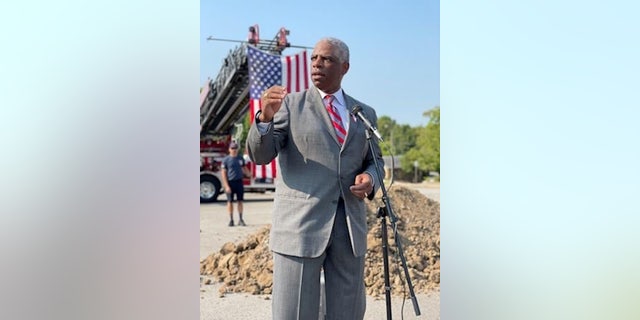 A county judge in Arkansas found his birth parents after an interview with Fox News Digital about his journey from a Chicago orphanage to his state’s 2022 race for lieutenant governor.

As he explained to Fox News, Wood spent the first 10 years of his life being shuffled through foster homes before he was adopted. He struggled profoundly throughout his youth with issues of identity and always questioned where he came from.

When Illinois made it possible in 2010 for adult adoptees in the state to apply for their original birth certificates, Wood discovered that his earliest record was a foundling certificate, which indicated he had been abandoned as an infant.

He learned he had been left swaddled in a shoebox in front of an apartment building March 20, 1965, which he had always thought was his birthday.

‘A race against time’

CeCe Moore, a prominent genetic genealogist who specializes in cold cases, reached out to Wood on Thanksgiving after his story garnered media attention from Fox News and other outlets.

Explaining how she has been doing extensive work regarding foundlings for a decade, Moore told Fox News Digital that such cases are “very special, because there is no way to resolve those cases through records.”

“Even if you open up adoption records, it’s not going to help those people,” she said. “So we call this DNA-only cases. The only way to identify the birth parents in cases like that is to have their DNA tested.”

Moore said after Wood agreed to accept her help, she and her team of volunteer detectives worked around the clock to build his family tree with the information they uncovered from his DNA, hoping to get him the answers he wanted before Christmas.

“It’s always a race against time, because you don’t know who might be passing away at any moment,” Moore said. “It’s always devastating when we find the family and somebody just died. We’re always rushing, but I will say, in this case, we were definitely rushing to get this information to him.”

Wood was elected as Arkansas’ first Black county judge, who serves as chief executive officer for the county government. He told Fox News Digital he and his family were preparing for the holidays when they received a call from Moore Dec. 23, informing them that her team had discovered a match.

“We were trying to get our arms around what she just said,” said Wood.

Wood described the family tree that Moore’s firm built for him as overwhelming.

“This is a huge family tree, oh my gosh,” he said. “To go from zero, with not having a single person connected to you, to looking at your family tree going all the way back to like 1790, that’s just a huge, huge family.

“I don’t know if I’ll ever have all the answers,” he added. “Clearly I won’t have some questions answered because my mother and father are not here to answer that. So everything I get will be through the eyes of my siblings and my uncles and aunts.”

Wood said the fact he treasured most from Moore’s investigation is that his birth mother lived only a street away from where he was dropped off.

“I’m just blown away that I got this far. I thought I would not know anything for the rest of my life,” he said.

Moore, who often works with law enforcement to determine the origin of abandoned babies, told Fox News that Wood’s story is an example of the importance of the safe-haven laws that have been implemented nationwide since the 1990s.

Safe-haven laws, also known as “Baby Moses laws,” are U.S. statutes that have decriminalized leaving unharmed infants at police stations, fire stations and hospitals. The first safe-haven law in the U.S. was passed in 1999 in Texas following 13 incidents of child abandonment that year.

“Judge Wood is very lucky he survived,” as are “so are many of the others I’ve worked with,” said Moore. She noted that many of the foundling cases she works with alongside law enforcement often end with the baby freezing to death or not being found in time.

“That shouldn’t be happening anymore,” Moore said. “That’s why the safe haven laws exist, so we can be sure that when the mom is in a desperate situation, these babies don’t have to die.”

A Korean War veteran named Ceasar Johnson found Wood in the shoebox in 1965. Wood later tracked him down and met him after looking into his past.

“I’m still wondering what could have been so horrific that I would be left in a box in the winter,” said Wood.

He remains optimistic he will find out more. He noted that Johnson told him his mother must have loved him because she placed him where he could be found.