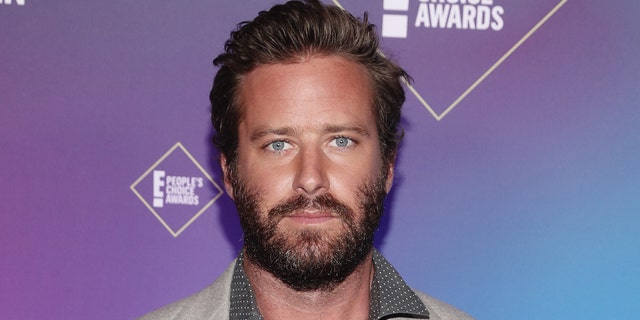 Armie Hammer and his family are the subjects of a new shocking docuseries.

On Wednesday, discovery+ debuted the first trailer for “House of Hammer,” a special that “chronicles the deeply troubling accusations leveled against critically acclaimed actor Armie Hammer and the dark, twisted legacy of the Hammer dynasty.”

In the trailer, two of the 35-year-old’s exes, Courtney Vucekovich and Julia Morrison, are seen speaking out about their experiences with the disgraced star. They also shared troubling text messages and voice notes they alleged are from Hammer.

“In the beginning, I felt like this was all perfect; this was amazing,” Vucekovich is heard saying in the trailer. “But then things changed. He pushes your boundaries a little bit at a time. You’re his, completely… I mean, he said, ‘I’m 100% a cannibal.’ I’m freaking out.”

ARMIE HAMMER HAS BEEN ‘CUT OFF’ FROM FAMILY DYNASTY

“It was all he wanted to ever talk about,” claimed Morrison.

Vucekovich alleged that a “mad” Hammer would tie her up until she was “completely immobilized.”

“I was closing my eyes until it ended,” she alleged through tears.

Casey Hammer, the actor’s aunt, also participated in the documentary to discuss the “dark, twisted secrets of the Hammer family.” She compared the affluent household to “Succession” magnified “a million times.”

Hammer’s father is Michael Armand Hammer, the grandson of oil magnate Armand Hammer, who ran Occidental Petroleum Corp. The industrialist had ties to the Soviet Union and had high-profile associates, including Prince Charles and former Libyan leader Muammar al-Qaddafi. When Armand died in 1990, Michael inherited nearly all of his family’s business empire, which was reportedly worth more than $180 million.

Hammer’s great-great-grandfather, Dr. Julius Hammer, was convicted of first-degree manslaughter after the wife of a Russian diplomat he gave an abortion to died. He was imprisoned in 1919. Julian, Armie’s grandfather, killed a man in 1955 in his Los Angeles home over a gambling debt and was accused of sexual assault by Casey.

Casey, who is estranged from the family, self-published a memoir in 2015 titled “Surviving My Birthright.” In 2021, she spoke to Vanity Fair for an exposé titled “The Fall of Armie Hammer: A Family Saga of Sex, Money, Drugs and Betrayal.” While Julian never addressed the allegations before his death in 1996, Casey’s half-sister Jan Ward told Vanity Fair: “I will say that I love my family very much, which includes my brother, my sister, and my nephews.” She declined to comment about the allegations.

“When all of this came out about Armie, I was not shocked,” said Casey in the trailer. “You just don’t wake up and become this dark controller, abuser. This behavior is deep-rooted.”

After those texts were published, Hammer departed from the comedy “Shotgun Wedding,” in which he was to star alongside Jennifer Lopez, shortly before production was to begin. He soon after departed from the Paramount+ series “The Offer,” about the making of “The Godfather.” Hammer was also dropped by his agency, WME.

Hammer was also accused of rape, which he denied. He spent most of 2021 at a treatment facility to seek help dealing with issues related to drugs, alcohol and sex, Vanity Fair reported.

WHO IS ARMIE HAMMER: HIS FAMILY, CAREER, SCANDAL, AND RECOVERY

Armie Hammer and Elizabeth Chambers were married from 2010 until 2020. They share two children.
(David Livingston/Getty Images)

A lawyer for Hammer, Andrew Brettler, previously told Vanity Fair: “All interactions between Mr. Hammer and his former partners were consensual. They were fully discussed, agreed upon in advance with his partners and mutually participatory. The stories perpetuated on social media were designed to be salacious in an effort to harm Mr. Hammer, but that does not make them true.”

Hammer first gained fame through playing twins in 2010’s “The Social Network,” and is best known for his starring roles in 2017’s “Call Me By Your Name” and 2013’s “The Lone Ranger.” He also starred in the Netflix remake of “Rebecca.”

“The accusations of rape and abuse brought against Armie Hammer in the last few years are just the tip of the iceberg when it comes to the Hammer family,” Jason Sarlanis, president of Crime and Investigative Content, Linear and Streaming, said in a statement sent to Fox News Digital.

“With ‘House of Hammer,’ we witness truly disturbing details and sinister secrets that money and power couldn’t hide forever,” it shared. “This documentary provides an important platform for the incredibly courageous women who came forward to share their stories, and we hope their courage inspires others to continue meaningful conversations around abuse in our society.”

Casey served as a consultant on “House of Hammer.” According to a press release, the documentary will feature “exclusive revelations,” as well as “multiple survivors of Armie’s alleged abuse.”

“The docuseries brings to light the dark secrets – ranging from accusations of violence and abuse to political manipulation and financial fraud – hidden within one of America’s most prominent families,” the statement read.

The special will premiere on Sept. 2.

If you or someone you know is suffering from abuse, please contact the National Sexual Assault Hotline at 1-800-656-4673. The Associated Press contributed to this report.

Judge Jeanine on inflation: Biden is ‘not feeling the