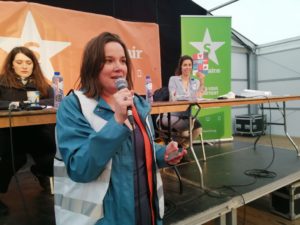 MPLP staff, patients, and volunteers at the Health square at Manifiesta. Photo: MPLP

Hundreds of patients of the Medics for the People’s (MPLP) 11 health centers from all parts of Belgium joined nurses, receptionists, doctors and other workers at the Health square (Carré Santé) at Manifiesta – the fest of solidarity which was held on September 17-18. Volunteers, patients and health workers braved the threat of poor weather and came together to  reflect on what lies ahead in the months to come.

Together with organizations like Viva Salud, which works for the protection of the right to health abroad, Medics for the People is one of the many collectives which sees Manifiesta as a place to strengthen ties with groups with whom they work with on a daily basis and find new allies for achieving their vision. The discussions MPLP coordinated at the festival built upon a new vision statement which the organization launched in May this year.

Starting off with an exchange on the working conditions of general practitioners (GPs) and the accessibility of primary health care, Medics for the People’s Hanne Bosselaers highlighted how an intersection of inadequate planning in the field of the health workforce, an increasing workload consisting primarily of administrative tasks and the persisting elitization of medical training is leading to a bleak scenario for everyone involved.

Medical student Yazdan Nazimi and GP Laurens De Boeck added to the reflection based on what they observe on the ground every day. Nazimi warned against fixed quotas and strict entry requirements which put in place obstacles for those wishing to begin their training, and limit the number of new doctors entering the health system although there’s a shortage. The effects of this are particularly felt by potential physicians coming from the working class, thus reaffirming the status quo where the class background of the doctors makes them unaware of many of the everyday struggles that workers lead that affect their health.

General practitioners tend to be seen as gatekeepers or medical ‘switchboard operators,’ merely routing patients to specialists. In order to restore them to the role of companions guiding patients through different phases of their lives, it is essential to address issues beyond training. Due to the overall lack of physicians, young GPs often lack mentorship and guidance when they begin working, and frequently find themselves left on their own. For example, they are expected to independently take medical guard duty in remote areas although they might lack the confidence to do so, which in many cases leads to them getting disheartened, warned Laurens De Boeck.

And then there is the ever-present administrative load which looms over the practice of most workers in primary care, taking away precious time they could otherwise have used to get to know their patients better.

The importance of a compassionate and well-trained health workforce cannot be overstated at a time when commercialization of health is making it increasingly difficult for people to access care and rendering some widespread health problems completely invisible. This is the case with illnesses experienced by workers, whose health deteriorates due to precarization, bad working conditions and pressure from employers. When this happens, systemic support is not available, meaning that many workers are left on their own, out of jobs and the possibility of finding new ones.

In a panel discussion moderated by Elise Derroitte from Mutualités Chrétiennes, the Christian Mutual Health Insurance Funds, participants of Manifiesta shared their views on what can be done to protect the health of workers and ensure that the responsibility for work-related diseases is shifted to employers. Catherine Mathy, representative of the Belgian General Federation of Labor and a former worker at cleaning service company Laurenty, and physician Elisa Munoz Gomez (MPLP) talked about the the prevalence among workers of musculoskeletal diseases such as tendonitis or pinched nerves which cause pain in the back and joints.

The panelists noted that one of the root cases of such illnesses was that workers, many of whom are in precarious jobs, do not avail of sick leave until they physically cannot bear the pain any more. This is due to a widespread fear of losing their jobs. This trend is widely prevalent not only in Belgium but also in the Netherlands as reported by trade unionist Kitty Jong from the Federation of Dutch Trade Unions (FNV) and in eastern European countries as illustrated by examples collected by the People’s Health Movement Europe.

With time, unaddressed health problems accumulate and lead to an explosion of long-term medical leave, serious accidents at work, and mental health problems. Half a million workers in Belgium, many of whom are older than 55, are currently on long-term medical leave. According to Elisa Munoz Gomez, this should be taken as a sign that current practices make it impossible for people to work past this age, although many European countries are increasing the mandatory retirement age beyond 65.

What happens in those ten years between – unless governments put in place mechanisms and policies to protect workers – is an overwhelming slide into poverty and illness which is aggravated by the inaccessibility of medicines.

The behavior of drug producers during the COVID-19 pandemic was yet another instance of Big Pharma’s insensitivity to anything except its own profits. This is clearly not the last pandemic and treatments for many illnesses remain under-researched because they are deemed unprofitable by producers. In this context, Medics for the People included the initiative of building a European network for public research and development. Tim Joye (MPLP) presented the idea of a network of Salk Institutes during a discussion on public pharma alternatives, and was joined by researcher and advocate Els Torreele and Ward Rommel from the Stand Up Against Cancer initiative.

More than anything, taking research, production and distribution of medicines into public hands would mean that many people whose families cannot afford existing treatments due to prohibitively high prices set by producers, would finally have access to the medicines they need. The coldness of Big Pharma in the face of the struggles of working-class families who are asked to pay millions of euros for a single course of therapy is something that leaves an indelible mark on those who experience it, said Ellen De Meyer, one of the speakers at the panel.

De Meyer is the mother of a daughter whose treatment for muscular disease cost almost 2 million euros. Left to the whims of the drug producer, the family would have never been able to afford it. They were able to manage only due to solidarity campaigns. The thought of many more people facing a similar situation kept De Meyer engaged as an advocate for a different pharma system.

The establishment of Salk Institutes, alongside with the struggles for better workplaces in the health sector and elsewhere is part of the joint vision of activists such as De Meyer, health workers, and patients. The discussions organized by Medics for the People’s discussions indicated that the journey has already begun.