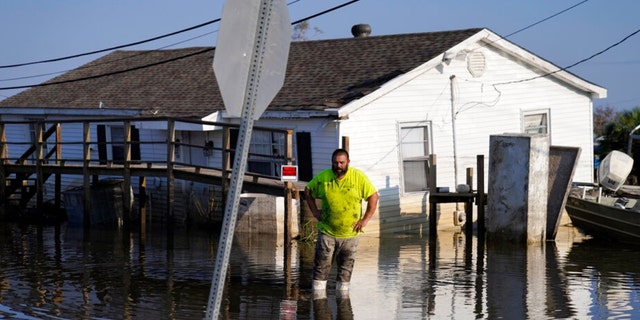 The Atlantic has been quiet as the U.S enters what is typically the busiest part of the hurricane season.

None of them have reached the 75-mile-per-hour threshold for hurricane status.

According to Fox Weather, more than two months into the season, the basin has produced four named storms and at least one hurricane.

Generally, in a La Niña cycle, the Atlantic has no problems producing multiple cyclones.

The climate pattern – which has the opposite effect of El Niño – has resulted in some of the busiest years on record in the basin.

FILE – Nathan Fabre checks on his home and boat destroyed by Hurricane Ida,, Sept. 5, 2021, in Lafitte, La. “We lost everything,” said Fabre about the destruction of his home. Federal meteorologists said Thursday, Aug. 4, 2022, this hurricane season may not be quite as busy as they initially thought, but it should still be more active than normal.
(AP Photo/John Locher, File)

Nevertheless, Fox Weather Hurricane Specialist Bryan Norcross says that the season can change on a dime, highlighting Aug. 20 as the date was hurricane season “tends to really kick in.”

In July, forecasters at Colorado State University predicted that an additional 17 tropical cyclones could develop.

In a previous forecast in June, the school predicted a total of 20 named storms, including 10 hurricanes.

The climatological peak is Sept. 10.

The hurricane season runs through Nov. 30.

The National Hurricane Center said a weak low pressure area over the northwestern Gulf of Mexico is producing disorganized shower and thunderstorm activity.

The system will move inland over southern Texas on Sunday

Julia Musto is a reporter for Fox News Digital. You can find her on Twitter at @JuliaElenaMusto.

Dan Andrews predicted to win but is he getting ahead of...

Yaqeen Institute - October 7, 2022 41
Before Islam, the Quraysh knew the Ka’bah was special, but they misused the holy site in pursuit of idolatry. As a result, the...
Go to mobile version