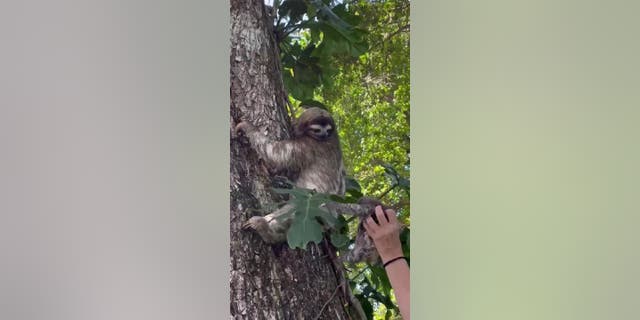 A baby sloth has been reunited with its mother in Costa Rica after it got separated from her in a coastal forest.

Staff at the Jaguar Rescue Center on the Caribbean island’s Playa Chiquita (Small Beach), found the three-fingered sloth on May 10, after they heard it cry.

In a Facebook post, which has since gone viral, the Jaguar Rescue Center said a male staff member found the young sloth “on the floor near the beach” and he spotted the mother on a nearby tree.

The mother sloth had already begun her climb up the canopy before the staff member could reunite them.

A three-toed sloth baby climbed down a tree in Costa Rica after she heard her baby’s recorded cry. A human rescuer held up the baby, so she could see her baby clearly.
(Jaguar Rescue Center)

“He brought the baby for a check-up with the vet, the sloth was healthy and didn’t have any injuries,” the facility wrote.

While caring for the sloth, staff at the Jaguar Rescue Center recorded the baby’s cries. When it came time to find the mom, they played the recording near a tree to draw her near.

The plan worked perfectly, and the mother sloth climbed down to retrieve her baby.

A 39-second clip the rescue center shared to Facebook shows the mom slowly climbing down a tree trunk while the baby called out to her. She gently grabbed the baby from a staff member’s hand and nestled her precious cargo to her front.

The mother sloth recognized her baby and gently took hold of her precious cargo from a human rescuer’s hand in Costa Rica.
(Jaguar Rescue Center)

“We waited patiently until the mom came down for the baby,” the rescue center wrote. “The JRC created this method a few years ago, we use it every time to be able to reunite mom and baby sloths. It melts our hearts every time we can witness the reunion of a mom and her baby.”

Fox News Digital reached out to the Jaguar Rescue Center about the baby sloth’s sex and age.

The video has resonated with people around the world with it garnering more than 947,000 Facebook reactions, 45,000 comments and 186,000 shares.

GERMAN SHEPHERD RESCUED AFTER FALLING DOWN 12-FOOT HOLE IN CALIFORNIA

Brown-throated three-toed sloths are also known as Bradypus variegatus. Mothers in this sloth subspecies raise their young solo for up to 12 months, according to The Sloth Conservation Foundation.

Sloths reportedly have a top speed of two miles per hour. Three-toed sloths can grow between 17 and 31 inches in length, weigh between 5 and 14 pounds and up to 40 years.

A lost three-toed sloth baby in Costa Rica was reunited with its mother after she heard its recorded cry and climbed down. The pair cuddled once they were brought together.
(Jaguar Rescue Center)

Researchers at The Sloth Conservation Foundation estimate that Costa Rica has five million sloths, which includes the brown-throated three-toed sloth and the Hoffmann’s two-toed sloth.

The Jaguar Rescue Center is located in Puerto Viejo – a small town in the southeast of Costa Rica, which sits within the island’s Limón Province.

The facility describes itself as a nonprofit animal rescue center that specializes in rescuing “orphaned and injured jungle babies like monkeys and sloths.”

Guided public and private tours are provided by the center as well.