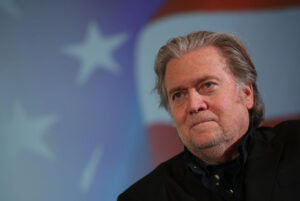 Steve Bannon’s lawyers duked it out with prosecutors on Friday through dueling motions in limine preparing for his July 18 jury trial on contempt of Congress charges.

Bannon, who refused to engage at all with the January 6 Select Committee and then promised to turn his indictment into “the misdemeanor from hell for Merrick Garland, Nancy Pelosi, and Joe Biden,” is very concerned that prosecutors will poison the jury against him. Toward that end, he’d like to preclude any mention of the unfortunate events of January 6, 2021.

“On November 12, 2021, Mr. Bannon was charged in a two count Indictment that alleged that his conduct after receiving a subpoena dated September 23, 2021, issued by the Select Committee to Investigate the January 6th Attack on the United States Capitol (“Select Committee”), constituted contempt of Congress, in violation of 2 U.S.C. § 192,” his lawyers argued. “Evidence about events that took place eight months earlier – namely the January 6, 2021, attack on the U.S. Capitol – have no bearing on whether Mr. Bannon willfully made default in response to the September 23, 2021, subpoena.”

Leave aside the suggestion that anyone in DC needs “images and commentary about the attack” to remind them what happened in their back yard 18 months ago. Bannon’s lawyers Evan Corcoran, David Schoen, and Robert Costello argue that any mention of the Capitol Riot and the events leading up to it will be so prejudicial that they must be excluded.

So why did the January 6 — oops, sorry the [REDACTED] Select Committee want to talk to the defendant? It’s a mystery.

And while Bannon’s lawyers are redacting reality, they’d like to nix the entire indictment against their client. Because, hey, shoot for the moon, right?

The Indictment in this case is a “speaking indictment.” Its first seven pages make a variety of allegations, each of which would need to be proved by competent evidence introduced at trial in order to be considered by the jury. Mr. Bannon therefore requests that the entirety of the Indictment not be read to the jury during trial or given to the jury during its deliberations.

That one is kind of a head scratcher, since the indictment is usually transmitted to the jury with the jury instructions. Are Bannon’s lawyers seriously suggesting that they’re going to hid the fact that their client was subpoenaed by the committee, failed to comply, and was subsequently arrested? Because that’s the bulk of what’s in this plain vanilla indictment, and it seems like the jurors are going to find out about that stuff anyway during the trial.

Meanwhile, the government filed a motion of its own to stop Bannon from turning the trial into an episode of his wacko podcast, live from the courtroom.

“As recently as this Wednesday, at another courthouse press conference following a motions hearing before the Court, the Defendant expressed interest in turning his trial into a political spectacle, referring to Members of Congress using derogatory nicknames, and saying, ‘I look forward to having Nancy Pelosi, and little Jamie Raskin, and shifty Schiff in here at trial answering questions under my . . . under the . . . tough thing about my lawyers,’” prosecutors wrote, adding later that “The Defendant has given every indication he intends to create a circus atmosphere and seek a verdict based on improper nullification considerations instead of the relevant law and facts. His efforts should be rejected and his attempts to raise improper arguments during trial precluded.”

Noting that “the Court has broad discretion and authority to prevent a circus atmosphere at trial and must exclude improper evidence and argument that would create it,” the government seeks to preclude Bannon from making the very “improper arguments that politicize this case” which he has promised to make from the moment he got indicted.

Alleging selective prosecution, Bannon vowed to subpoena members of Congress and their staffs, as well as members of the executive branch including the prosecutors themselves, and grill them on the witness stand about their political biases. Unsurprisingly, the US Attorney would like him not to do that, and hopes to head off mention of Pelosi and Raskin if the legislators succeed in quashing subpoenas thanks to the speech or debate clause.

“The political affiliations of Members of Congress and their staff are similarly irrelevant to the issues that will be raised at trial … and they are not relevant to determining whether, despite receiving a subpoena, the Defendant decided not to comply,” prosecutors argue, adding that “it would likewise be improper for the Defendant to call Members or staff for the sole purpose of questioning them about their biases against the Defendant.”

Also the government would like to exclude questions about the January 6 Committee’s legitimacy and whether Bannon made a valid assertion of executive privilege,  alleging that those are questions of law, not fact, and thus inappropriate to mention to the jury.

In the end, Bannon would like to have his cake and eat it, too — turning the trial into a three-ring podcast where he gets to make all manner of incendiary allegations, while barring any mention of the event which brought the committee into being and brought Bannon into its sights.

Liz Dye (@5DollarFeminist) lives in Baltimore where she writes about law and politics.