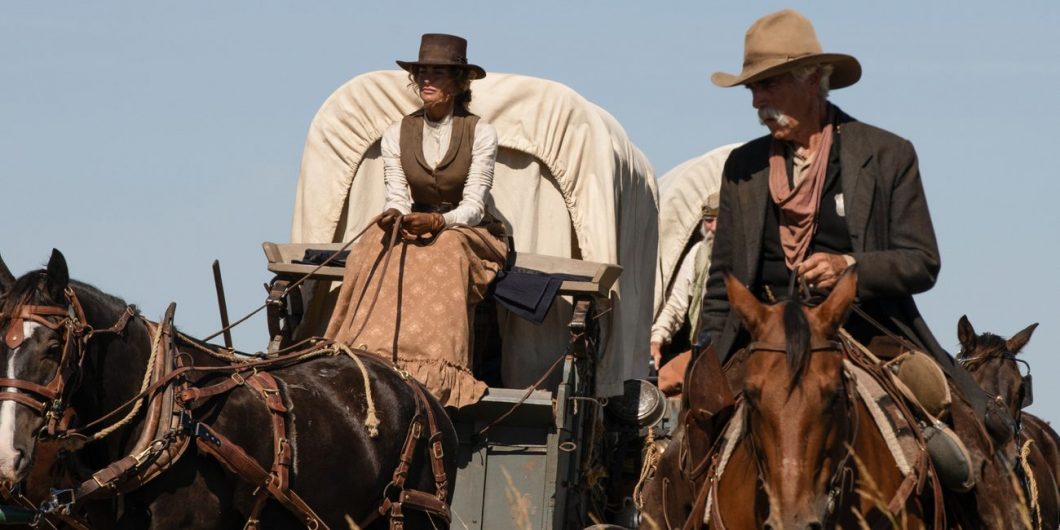 Taylor Sheridan is the Western artist of our time. He went from an Oscar and critical success with thrillers like Sicario (2015) and Hell or High Water (2016) to popular success, telling the kinds of stories millions of Americans want to see on TV, with Yellowstone (2018-2022). And now he’s going further, telling an Old West story, 1883, about the origins of the Yellowstone ranch’s Dutton family in the early days of America’s post-Civil War new birth of freedom.

For Yellowstone, Sheridan resurrected the career of Kevin Costner, reminding America that he was the cowboy in his generation of celebrated actors. That’s the kind of judgment only artists fit for national honor have. So also for 1883, Sheridan cast Sam Elliott, whom you might remember from the Coen brothers’ The Big Lebowski or from Road House. The series also stars country music’s favorite family, beautiful, talented, faithful, and thriving: Tim McGraw and Faith Hill. All these actors are older than Sheridan himself—he’s trying somehow to tie the performances and style of drama of an older America to the new generation he’s training on his various movies and shows, in order to give Americans back what they loved about the Western.

This is what cinema requires in our times. We can no longer have stars, those remarkable creatures of old, defined by their brilliance and their being out of reach. The new culture of celebrity and TV has killed that, ushering in the age of social media “influencers,” cancel culture, reality TV, and scandal-mongering. Sheridan is part of a new generation of artists who put aside the silly glamour of Hollywood and the rest of the media in favor of that which made the stars possible in the first place—the national past. The American story is a drama and therefore needs and calls forth heroes.

James Dutton (Tim McGraw) and his wife Margaret (Faith Hill) decide to move the family to the unknown West. She comes from a good Southern family; he’s a Civil War veteran, wounded at Antietam and starved in Union prisoner camps for the second part of the war until Appomattox. The post-War South is not a place with a future, so he becomes a Westerner by going to Texas. There’s a future in the West, but there’s also lawlessness that suggests the Civil War isn’t entirely over. We see in Dallas the birth pangs of a new nation, violent and free at the same time—hopeful, but uncivilized.

Like his great-grandson in Yellowstone, Dutton only cares about his family. He treats everyone right whom he can, but he is indifferent to their lives or deaths, and he destroys anyone who threatens his family. He’s the ideal American man: a Southern Stoic, tough, silent, competent, in control of himself, and ready to deal with events. He is uninterested in religion but is a husband and father at all times, whose only weakness is the loving impudence of his children. But he understands the weakness of the family as a whole, so he gets together with a wagon train led by two other veterans, a former Union officer named Shea (Sam Elliott) and a man from the Buffalo soldier regiment he led, Thomas (LaMonica Garrett). Both are also former Pinkertons, since after the war, the military virtues didn’t really have many uses. Neither has family—lost to smallpox—and the ruthless beauty of the unconquered West is their only consolation.

They are hired by immigrants from Europe—from Germany and farther East—who neither understand America nor speak English, but are Christians looking for a future in a land like the one they know. Unaware of the terrestrial paradise, California, they’re going to Oregon, across the Great Plains. They are looking for freedom, but they are not fit to be Americans—they have never faced death. America as a whole faced death in the Civil War and most people alive had family involved. In a way, the members of the caravan are like children, as Europeans must seem to Americans for obeying ancient traditions instead of making a way of life for themselves. The caravan is confronted with all the suffering of the unconquered land, where living creatures as much as the earth or the water can be deadly, and the survivors hardly have time to mourn the family they bury.

The Great Plains are the heartland of America in Sheridan’s vision. They are the promise and the threat, the good and bad that molded American character. Every resource and every form of pride is somehow tied up with the terrible suffering of ancestors who had to do and suffer things now unimaginable in order to take care of themselves, their families, and, if they had them, communities. On display is the pain necessary for but ultimately banished by civilization. Sheridan is a great believer in Lincoln’s strange observation that America is the almost-chosen nation, and he therefore shows the desert that must come before the promised land, since God would not allow the people to take the shorter path that leads through the land of the Philistines.

In the crossing, the family changes—it Americanizes and democratizes. Women toughen up and indeed end up dressing like men, some even becoming cowboys. The men, forced by necessity, become more equal with their wives, losing authority but perhaps gaining love in turn, a necessary source of hope in a savage land.

Immigrant boy John Ford from Ireland became the greatest American when it comes to storytelling. After first making silent Westerns, he later discovered and eventually made a star of John Wayne. He is responsible for elevating the Western into America’s favorite kind of movie and an art form. He was also a patriot who, in the middle of his career, volunteered for World War II to document the great patriotism of ordinary boys at the risk of his life and that of his filming crew. That’s the American dream—it’s not that you can be whatever you can imagine, which leads to the crazy identities of our times, but that you can be an American, and you could be touched by greatness and deserve well of your countrymen. That’s it.

Ford perfected an American idea about the Western: you’re either talking about a town and what it means to found a political community (The Man Who Shot Liberty Valance) or you’re talking about the desert and what it means to found a people (Wagon Master). In the 50s, Americans loved these kinds of stories, and TV meant first of all nostalgia for the Western, with long-running shows like Bonanza or Wagon Train, which lacked the greatness of an artist like Ford, but gained staying power, repetition, and popularity over a generation until the 70s.

Sheridan’s 1883 is to Yellowstone what Ford’s Wagon Master is to The Man Who Shot Liberty Valance. It’s about men of war, natural warriors, practiced warriors, protecting communities of faith trying to move West to a new land they believe in because of a promise they cannot fulfill by themselves. Men of war and men of peace have so little in common it’s hard to say how they can even work together as leaders and followers. The show is remarkable for its honesty about the problem of rule, including Americanizing foreigners who have to become responsible for themselves and inclined to defend themselves, without becoming fearful or hateful of other Americans. Imposing order on the wagon train without turning to tyranny, getting the civilians to police themselves, trying to teach where death might come from and how to prepare for it even if it’s painful—all these necessities of the journey reveal problems inherent in the principle of democracy, freedom, and the requirement that government involve consent and therefore a giving of reasons and a deliberation about what is to be done.

The veterans leading the group put their knowledge and their lives between the immigrant caravan and certain destruction, in the hope that some good thing that endures in the generations will come by way of American settlement of the West. This is the Union they fought for, in a way, the officer and the former slave, again equals in an enterprise that mixes high moral principle with terrible suffering. They are almost beyond hope because of the loss of their families, their future, or heirs. But hard as they are, they are Americans first. They cannot quite be tragic, and there is something Christian in their dedication to the widow and the orphan. Compared to the Stoic Dutton, who minds his own business, they are obviously very protective of community.

The West as an Origin

There are three Americas that make up America: North, South, and West. It’s always been that way and it was from the beginning a strange form of diversity for such a single-mindedly democratic nation. The North is all about independence—it’s the birthplace of communal self-government among the Puritans. The most morally demanding scrutiny of our souls tends to start there, which is why elitism is still a Northeastern habit, sometimes a pastime and sometimes a madness. The South is all about honor—hierarchies that can be as beautiful as patriotic soldiers obeying the national call to duty accross the generations and as ugly as racial slavery begun in piracy. That’s why they care a lot more about manners and a lot more about the past than anyone else. It’s why they alone of the Americans know what tragedy means, because democracy broke their hearts.

The West seems to be made in some way from North and South—just think of the importance of Texas for the conservative imagination in our time, both the land of the great Sam Houston and a slave state that joined the Confederacy. Freedom is both independence and a kind of honor in the West. It’s what we now call, in a vulgar but proud language, startups, which can mean anything from Silicon Valley to lynch mobs. It is an ethic that is at best half-Christian, but all-American: Texans are always making a new start, and rarely hold a loyalty or a conviction that stands the test of time. Nevertheless, they are unconquerable. 1883 is about the West, trying to show that it is the origin of our habits that make us equal and free, or equally free, but only so long as we remember we are a people made by pioneers or pilgrims, who became American in the strife to tame the land.

I won’t bore you with my theory of government, but it’s easy to see that as Americans multiplied greatly, the House of Representatives would eventually become Western, that the Senate would stay Northern and Southern because of the preponderance of states and therefore elites over the population, and that the judiciary would be Northern because that’s where the law schools are. The parts of America on display in 1883 continue to live in our institutions and are behind the populist revolt against our elites.

But populism needs a basis, and Sheridan’s 1883 is all about showing what that means. The horrors of the Old West, though in a certain sense exaggerated, are in the fundamental sense real. Who alive today is capable of understanding what America did in World War II or the misbegotten wars since, much less what Americans did to each other in the Civil War? But we need to understand that strength and harshness, those sacrifices and losses, in order to save this nation which our fathers brought forth on this continent, conceived in liberty, and dedicated to the proposition that all men are created equal.

North Korea fires missile into sea as US aircraft