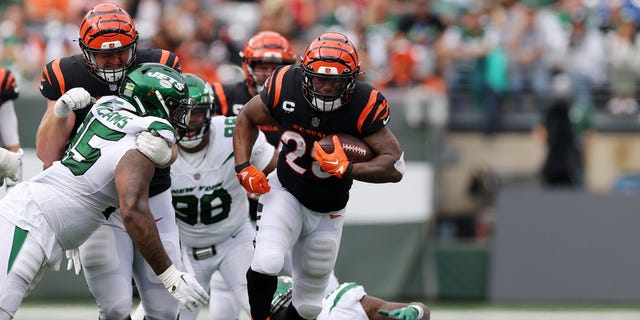 The Cincinnati Bengals’ offense looked alive Sunday against the New York Jets, totaling 27 points to earn their first win of the season. One part of the offense remains a question mark, though.

Running back Joe Mixon had a breakout year in 2021, totaling 1,205 yards on 292 carries (4.1 yards per touch) with 13 touchdowns. The run game set everything else up for quarterback Joe Burrow to find his favorite receiving targets, Ja’Marr Chase and Tee Higgins, among others.

Through three games this season, it’s been a chore for Mixon to get positive yardage. Against the Jets, he carried the ball 12 times for 24 yards, while catching three balls on seven targets for 14 yards.

Joe Mixon (28) of the Cincinnati Bengals runs with the ball against Quincy Williams (56) of the New York Jets during the fourth quarter at MetLife Stadium Sept. 25, 2022, in East Rutherford, N.J.
(Jamie Squire/Getty Images)

Mixon is averaging just 2.8 yards per carry so far this season (163 yards on 58 attempts) and hasn’t found the end zone. But offensive coordinator Brian Callahan says he isn’t at all worried about the Pro Bowl back.

At least, not yet.

“I think you’ll see improvement from him,” Callahan said via Cleveland.com. “He’s going to run for a bunch of yards because he’s going to get a lot of opportunities to do it.”

Callahan’s confidence comes from what he’s been watching on film, not necessarily the stat sheet.

“We look at all of our inefficient runs every week and what’s the reasoning for them, and we had a zero yard gain or a negative gain,” Callahan said. “What you come away with from watching all of them is that it’s always somebody somewhere. There’s no consistent problem.”

Joe Mixon (28) of the Cincinnati Bengals runs with the ball against Michael Carter II (30) of the New York Jets during the first quarter at MetLife Stadium Sept. 25, 2022, in East Rutherford, N.J.
(Jamie Squire/Getty Images)

The Bengals’ offensive line has been an issue so far this season in both the run and pass games. Burrow has had to avoid tons of pressure and has still been sacked a league-high 15 times (tied with Carson Wentz of the Washington Commanders).

Mixon has a chance Thursday night prove the naysayers wrong and help out his fantasy owners in the process as he goes against a Miami Dolphins team that has allowed 116 yards per game on the ground this season.

As Callahan said, Mixon’s going to get his opportunities.

Joe Mixon of the Cincinnati Bengals walks off of the field against the New York Jets at MetLife Stadium Sept. 25, 2022, in East Rutherford, N.J.
(Cooper Neill/Getty Images)

“I don’t really worry about Joe at this point too much,” Callahan said.

Scott Thompson is a sports writer for Fox News Digital.

What Happens if You’re Caught Shoplifting Under 18?