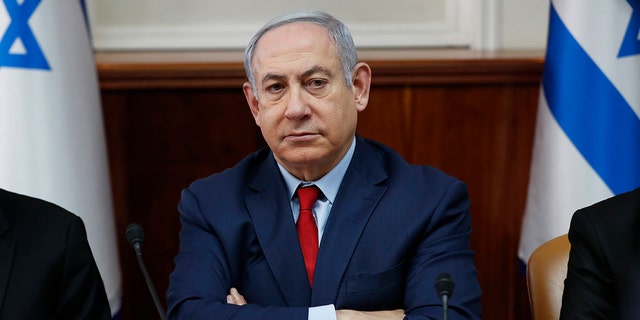 Former Israeli Prime Minister Benjamin Netanyahu called out the “Palestinian propaganda machine,” saying it has been “caught red-handed” after the Israel Defense Forces (IDF) said Palestinian children were killed by a rocket attack from Gaza militants that fell short of their intended targets.

Speaking on “Fox News Live” on Sunday, the former prime minister argued that Israel must “puncture” the “lies” coming from Palestinians.

“They said that we in Israel killed five children. They didn’t tell you the truth and this was caught on a video,” Netanyahu argued.

“Those five children were killed when [an] Islamic Jihad rocket that was aimed at Israel misfired [and] fell on these kids, so they actually murdered their own children in the process of trying to murder us.”

Netanyahu made the comments as tensions between Israel and Gaza escalated since Friday when the Israeli military announced an official operation after a coordinated strike killed top Islamic Jihad commander Tayseer al-Jabari. According to the IDF, “Jabari was responsible for multiple terrorist attacks against Israeli civilians.” A second senior commander, Khaled Mansour, was killed on Saturday.

In a statement sent to Fox News Digital on Friday, Gilad Erdan, Israel’s ambassador to the United Nations, noted that the mission was carried out on Friday “due to an attempted attack on Israeli civilians by Palestinian Islamic Jihad.”

The ambassador said that “Israel was forced to commence a military operation with surgical strikes in order to thwart their rocket attacks from Gaza.”

“Palestinian Islamic Jihad is a radical terror proxy of the Ayatollah regime in Iran and its clearly stated goal is the destruction of the state of Israel,” Erdan continued.

The ambassador also called on “the international community and the United Nations to stop making false immoral comparisons between a law-abiding democracy and radical terror organizations and to support Israel’s right to defend its citizens.”

Islamic Jihad militants have fired hundreds of rockets into Israel since Friday, with some targeting Jerusalem.

Former Israeli Prime Minister Benjamin Netanyahu says that he believes the current conflict is not only a physical battle, but also “a moral and political battle” as well as “a public relations battle.”
(Ronen Zvulun/Pool via AP)

Netanyahu said on Sunday that he believes the current conflict is not only a physical battle, but also “a moral and political battle” as well as “a public relations battle.”

He then pointed to what he called the difference between Israel and the Palestinian Islamic Jihad movement, arguing that “they fire at civilians while hiding behind civilians” while Israel tries “to target the terrorists while avoiding as much as we can civilian casualties.”

“That is the difference between a free society, a democracy, and these terrorist killers who follow this radical ideology,” Netanyahu continued.

The former prime minister’s comments came a few hours before Egyptian intelligence officials called for a cease-fire to begin Sunday night, indicating that a deal has been struck to end the violence.

The Associated Press reported that an Egyptian intelligence official, speaking on condition of anonymity, said the truce between Israel and the Palestinian Islamic Jihad is expected to begin at 11:30 p.m.

Prior to the development, Israeli aircraft hit targets in the Gaza Strip, raising the Palestinian death toll, and militants fired repeated rounds of rockets that reached deep into Israel.

Israeli Prime Minister Yair Lapid stressed that Israel was striking “in a pinpoint and responsible way in order to reduce to a minimum the harm to noncombatants.”

“The Israeli government will not allow terrorist organizations in the Gaza Strip to set the agenda in the area adjacent to the Gaza Strip and threaten the citizens of the State of Israel,” Lapid said in a statement. “Anyone who tries to harm Israel should know: we will find you.”

Fox News’ Anders Hagstrom and The Associated Press contributed to this report.

Bengals not worried about Joe Mixon’s lack of