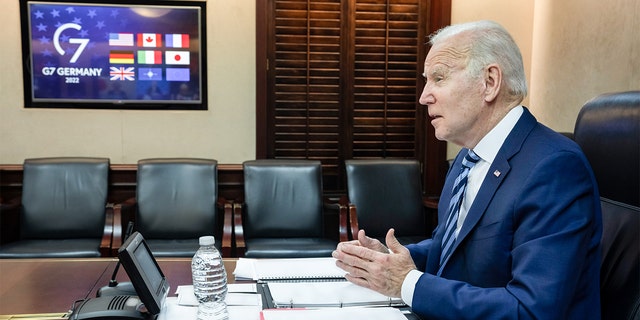 President Biden is set to address the American people from the White House and announce further “devastating” sanctions for Russia, which launched a multi-front attack on Ukraine Thursday.

Biden tweeted that he and G7 counterparts has agreed to sanction packages and economic measures “to hold Russia to account.”

“We stand with the brave people of Ukraine,” he wrote.

President Biden met virtually with his G7 counterparts and agreed on “devastating” sanctions against Russia over its war against Ukraine, Thursday, Feb. 24, 2022.
(White House)

As the situation escalated Wednesday night, Biden offered the “prayers of the entire world” to the people of Ukraine as they suffered what he called an “unprovoked and unjustified attack by Russian military forces.”

“President Putin has chosen a premeditated war that will bring a catastrophic loss of life and human suffering. Russia alone is responsible for the death and destruction this attack will bring, and the United States and its Allies and partners will respond in a united and decisive way. The world will hold Russia accountable,” Biden said in a statement.

He also convened a National Security Council meeting Thursday in the Situation Room.

A senior U.S. defense official told Fox News on Thursday that Russia’s attack is “just the initial phase,” and that they Russian military activity to “unfold in multiple phases.”

“They have every intention of decapitating the government and installing their own government,” the official said.

The official said Pentagon officials “haven’t seen something on this scale” since World War II, saying officials anticipate that it will be “very bloody, very impactful” and continue “for a long, long time to come.”

“This is a war of choice,” the official said.

A woman walks past the debris in the aftermath of Russian shelling, in Mariupol, Ukraine, Thursday, Feb. 24, 2022.
(AP Photo/Evgeniy Maloletka)

Putin, in an address Wednesday night announcing he had made the decision to green light Russian military operations in Ukraine, said that Moscow’s “analysis” had concluded that “confrontation with these [Ukrainian] forces” was “inevitable.”

Putin, though, threatened the west and countries that try to interfere with Ukraine with “consequences you have never seen.”

“A couple of words for those who would be tempted to intervene,” Putin said Wednesday night. “Russia will respond immediately and you will have consequences that you never have had before in your history.”

In a reminder of Russia’s nuclear power, Putin said “no one should have any doubts that a direct attack on our country will lead to the destruction and horrible consequences for any potential aggressor.”

Russian forces invaded Ukraine by land, air and sea in the largest military attack of one state against another on the European continent since the Second World War.

The wide-ranging attack on Ukraine on Thursday hit cities and bases with airstrikes or shelling, as civilians piled into trains and cars to flee. Ukraine’s government said Russian tanks and troops rolled across the border in a “full-scale war” that could rewrite the geopolitical order.

Ukraine Foreign Minister Dmytro Kuleba said the country severed diplomatic relations with Russia and called “on all our partners to do the same. By this concrete step you will demonstrate that you stand by Ukraine and categorically reject the most blatant act of aggression in Europe since WWII.”

While the attack on Ukraine was largely condemned by the West, it’s unclear whether forces will intervene. NATO is sending additional forces to bolster defenses in eastern Europe.

And Ukrainian President Volodymyr Zelenskyy promised: “We will defend ourselves.”

An advisor to Zelenskyy said Thursday that, so far, about 40 people have been killed in the Russian attic on the country, and that several people have been wounded. He didn’t specify whether casualties included civilians.

Zelenskyy said he would be providing weapons to citizens who want to help defend the country, instructing them on Twitter to “be ready to support Ukraine int he squares of our cities.”

“The future of the Ukrainian people depends on every Ukrainian,” he said Thursday, urging all those who can defend the country to come to the Interior Ministry’s assembly facilities.

Russia “has embarked on a path of evil,” Zelensky said, but Ukraine “is defending itself & won’t give up its freedom no matter what Moscow thinks.”

Zelenskyy said sanctions would be lifted “on all citizens of Ukraine who are ready to defend our country as part of territorial defense with weapons in hands.”

The map shows where Russia attacks been reported in Ukraine

“Russia treacherously attacked our state in the morning, as Nazi Germany did in #2WW years,” Zelenskyy tweeted. “As of today, our countries are on different sides of world history.”

The Russian military claimed to have wiped out Ukraine’s entire air defenses in a matter of hours, and European authorities declared the country’s airspace an active conflict zone. Russia’s claims could not immediately be verified, nor could Ukrainian ones that it had shot down several Russian aircraft, according to The Associated Press. The Ukrainian air defense system and air force date back to the Soviet era and are dwarfed by Russia’s massive air power and precision weapons.

Western counties were anticipating hundreds of thousands of people to flee from the attack on Ukraine, Reuters reported. Highways outside of Kyiv swelled with traffic Thursday leading to Poland, and lines of people waited for gasoline, to withdraw money or to purchase other supplies, such as food and water.

The Four Horsemen of the Apocalypse – Who Are They & What Do They Represent?