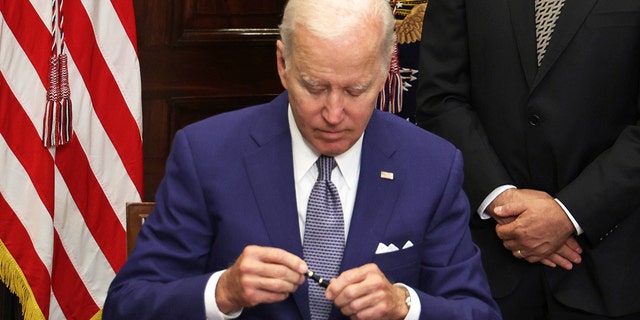 President Biden and Vice President Kamala Harris will host the first meeting of the interagency Task Force on Reproductive Health Care Access on Wednesday, when the president is expected to take further executive action to protect abortion services.

At the meeting, Biden will issue and sign a second executive order that will help allow women to receive abortions even if abortion is illegal in their state, a senior administration official said.

The new executive order continues to build on actions the Biden-Harris administration has taken to protect reproductive health care services and access to those services since the Supreme Court’s decision in Dobbs v. Jackson Women’s Health Organization.

President Biden after he signed an executive order on access to reproductive health care services at the White House in Washington, D.C., on July 8, 2022.
(Alex Wong/Getty Images)

It also directs the department to ensure health-care providers comply with federal non-discrimination laws when offering such services and orders it to collect data to measure the impact of the ruling on maternal health, the official added.

The senior administration official stressed Biden’s commitment to defending reproductive rights, especially before the midterm elections are expected to flip the political majorities from Democrats to Republicans in the House of Representatives, the U.S. Senate, or both in November.