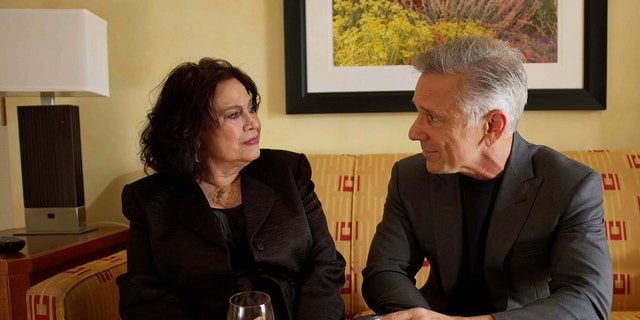 Lana Wood has plenty of reasons to celebrate these days.

The actress, who famously played Bond girl Plenty O’Toole in 1971’s “Diamonds Are Forever,” is now starring in Flixwest’s “Dog Boy.” She plays Vera Summers, a self-absorbed Hollywood movie star who is on the brink of financial ruin. But a chance encounter with a Navajo cab driver (Jeff Yazzie) takes her life on a completely different path.

“It touched so many parts of me,” the 76-year-old told Fox News Digital. “I identified with so many of the things that the character was going through or had gone through. There were some moments when it could have been me. It fascinated me. Scared me. But it was really great to do.”

“I remember when she said she was going to lose her home,” Wood reflected. “She was asked, ‘What did you do with all your money when you were working all the time?’ And she said, ‘I just spent it. I thought the money would always come.’ And it didn’t. Then she found herself in a position where she was going to lose her home. That really resonated with me. It was a little sad at times. But what a wonderful experience.”

Summers’ hardship hit close to home. In 2017, Wood was living in a motel with her daughter, Evan Taylor Maldonado, son-in-law, three grandchildren and two dogs. Mounting medical bills made finances scarce, and they were unable to afford the rent of their California home, forcing them to move out.

Lana Wood said she will never forget the outpouring of support she received from fans.
(David Livingston/Getty Images)

But that same year, Evan passed away from heart failure. She was 42. Wood said the support from concerned fans kept her going.

“It meant the world to me, it really did,” said Wood. “I just never imagined that people would help. I’m extremely grateful. They got my heart. Losing [my daughter] was an incredible trauma for the kids. But I’m still taking care of my grandchildren who live with me. They’ve always been with me. We’ve got a little house, we’ve got our dogs and cats. We’ve got each other. We argue over cooking and meals. One of the kids is being homeschooled and I’m there with him trying to understand algebra. But I’m very content.”

Wood also shared that she was embraced with open arms on set.

“[Eric Roberts] is just terrific,” she gushed about the actor. “He’s very precise and wants to get things done rapidly, easily. But he’s very sweet and a very giving actor. And he brings terrific cookies, which is always a plus.”

“It was frightening and a little overwhelming to walk on set for the first time,” Wood continued. “This is a little independent film with an enormous crew. But it felt like coming home. I made friends with everyone. I got over my nerves.”

Wood admitted that there were times, early on, when she wondered if she was meant to have a Hollywood career.

Actor Sean Connery and actress Lana Wood on the set of “Diamonds Are Forever.”
(Sunset Boulevard/Corbis via Getty Images)

“After I had my daughter, I was still acting, and I remember the traveling back and forth, just worried about her,” she explained. “People think filmmaking is glamorous and easy. It’s really not. There are long hours that keep you away. And when you’re done, you’re off to do something else. And I had reached a point where I was just very disillusioned. I wasn’t getting enough roles to sustain myself and my young daughter. I remembered I walked away from acting and got a job as a director of development, behind the camera. I absolutely loved it. I always enjoy telling the right story [on screen]. But there were many times where I wished I was on a beach somewhere studying marine biology.”

Fans still remember Wood best as a Bond girl who appeared alongside Sean Connery. She called the role the honor of a lifetime.

“You could call me a Bond girl any time you like,” Wood chuckled. “They originally wanted me as Tiffany Case. But then, I got a call from my agent and he said, ‘You’ve got the job, but there’s an issue — they want to know if you would play Plenty O’Toole, which is a smaller part and not what you originally wanted. Would you do that?’ Truthfully, I didn’t care. I was just thrilled to be part of the film. I played her sweet and innocent, a regular girl. And I loved it.”

Lana Wood, seen here in a publicity shot from “Peyton Place” in the 1960s, said she turned down a role in “Easy Rider.”
(Getty Images)

But Wood does have one regret — turning down the chance to appear in 1969’s “Easy Rider” alongside Peter Fonda and Dennis Hopper. The role went to Karen Black.

“Dennis Hopper never let me forget it,” Wood explained. “He said, ‘We wrote that for you.’ I was offered this other film that was being shot at MGM Studios. It was ‘For Singles Only’ with Milton Berle and Mary Ann Mobley. I remember my agent said, ‘You can do “Easy Rider,” but they won’t confirm any hotel or motel stays. They haven’t planned any of that. You’re going to be outdoors. You’re going to be driving around — it’s a motorcycle film. We understand there are drugs on set.’”

“I remember he was just making it sound so terrible. I thought, ‘Take me to MGM Studios.’ So, I turned it down. And every single time I would run into Dennis, he would remind me. He just couldn’t believe that I had done that to them. Looking back, I couldn’t believe it either.”

Wood is eager for what the future holds for her. And her late sister, Natalie Wood, has remained on her mind. In 2021, Wood wrote a book titled “Little Sister” about the star, who passed away in 1981 at age 43.

Actress Natalie Wood, right, and sister Lana Wood pose for a portrait at their home in Los Angeles. The elder sibling died in 1981 at age 43 from drowning.
(Earl Leaf/Michael Ochs Archives/Getty Images)

Today, Wood is feeling optimistic about telling stories on the screen, her way.

“[‘Dog Boy’] was made with such love,” she said. “Usually when a film wraps, everybody just scatters. But everyone here was just so involved and truly worked very hard to tell a great story. And it’s an interesting view into someone’s life, a former celebrity who learns about herself… it’s a story of hope. There’s hope out there and you never know who’s going to come to the rescue.”

Biden slammed for saying he has ‘no regrets’ about

A Man Can Plan His Life

Poland to ask Germany for approval to send tanks to