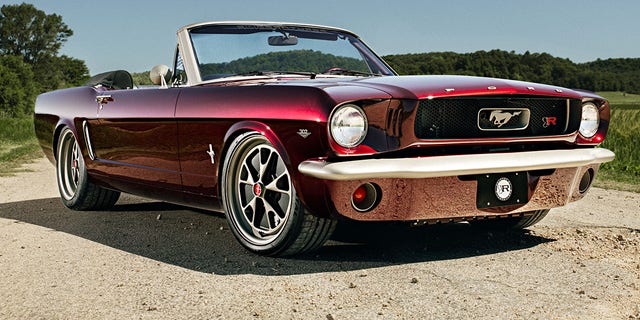 The 2021 Ford Mustang Mach 1 is the latest in a line of high performance Mustangs that dates back to 1969 and very different than the brand’s other “Mach” model, according to Fox News Autos Editor Gary Gastelu.

The next-generation Ford Mustang will be revealed in September, but now there is also a new version of the original pony car.

Famed custom car builder Ringbrothers has unveiled an entirely new vehicle based on the 1964.5 Mustang convertible that it built for a client.

Well, it still has the wheel center caps from the original car, but everything else has been custom fabricated.

Working from CAD data, the team actually scaled the body up an inch in length and width and combined it with the modern in-house designed chassis it uses for many of its projects.

Ringbrothers custom fabricated this recreation of the 1964.5 Ford Mustang.
(Ringbrothers)

At a quick glance, it looks like a lightly modified version of the car on the outside, while the interior is a more updated interpretation of the original’s, although it retains low-back seats popular in the period.

“The client was highly involved in the process and adamant on maintaining a subtle, stock-like appearance,” Ringbrothers co-owner Mike Ring said.

The Mustang’s interior is a modern interpretation of the original’s.
(Ringbrothers)

“Everything was cued off the Mustang’s original design, but we sharpened the lines and added a number of 3D-printed details to make it truly unique.”

1968 DODGE CHARGER RESURRECTED AS A ‘HELLUCINATION’

Things are much more modern under the surface. The car is powered by the same 5.0-liter V8 featured in the current Mustang and uses a 10-speed automatic transmission.

The Mustang is powered by a new 5.0-liter V8.
(Ringbrothers)

Ringbrothers has not said how powerful it is, but has upgraded it with custom intake headers and a Flowmaster exhaust.

THE CHEVROLET CHEVELLE MUSCLE CAR IS BACK IN A BIZARRE WAY

Another 21st century touch is an independent rear suspension, which the factory Mustang didn’t get until the latest model launched in 2015.

Ringbrothers said it took 4200 man-hours to build the car.
(Ringbrothers)

Penske Racing shocks and springs, Baer brakes and unique alloy EVOD wheels fashioned after the 1964.5’s signature Rally design round out the package.

Ringbrothers nicknamed the car Caged and said it took 4200 man-hours to build. Its price has not been revealed, but many of the shops other creations have been resold at auction for hundreds of thousands of dollars.