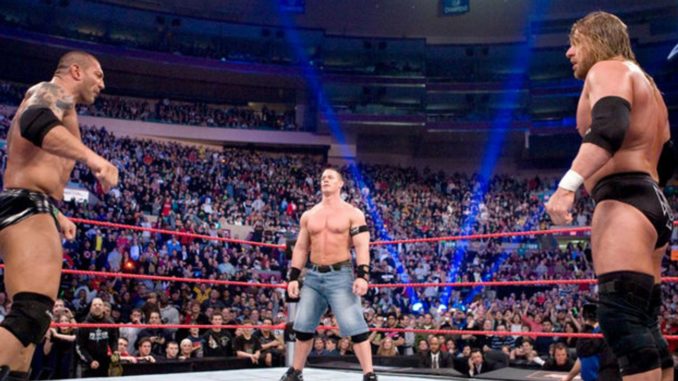 During a writer’s meeting, John Cena’s name was brought while discussing Evolution.

As former WWE writer and S.V.P. of Television for Seven Bucks Production, Brian Gewirtz continues to promote the release of his book, he sat down with Kurt Angle to record an episode of Angle’s podcast.

They touched on a myriad of subjects and it was brought up by Brian that when the group Evolution was still formulating in WWE, one of the names thrown out there in a meeting to be part of the group was John Cena. This was before Cena donned the ‘Doctor of Thuganomics’ character.

Gewirtz said it was only suggested and never followed up on but it’s interesting to think about how things would have been different if it was Cena in that spot instead of Randy Orton.

The big ‘what if’, now, when I say this, I wanna point out that this was discussed for maybe under two minutes in a single writer’s meeting with Vince [McMahon] but in a single meeting in which there were hundreds if not thousands of meetings. But this was like during the [Mark] Jindrak to Randy Orton, who’s going to be the fourth member of Evolution period of time and I do remember, I don’t know if it was me who said it, somebody said it, I might have said it, was, ‘What about that John Cena guy joining Evolution? What if we did that?’ And again, it was tossed about for a couple minutes and I think it was deemed that John, especially John at that particular time hadn’t really found himself yet. I think this was pre-rapping John. This was, great match with Kurt but then what-John, ruthless aggression and it was just like, ‘Hmm, I don’t think so. Maybe he’s a little too goofy. He just doesn’t fit’ was kind of like the feedback back then. I also threw out Christian [Cage] because I threw out Christian in literally everything, usually to Jay’s detriment because it was like, oh my God, can you stop pitching Christian to do this. But ultimately, we settled on Randy and again, this isn’t like some, John Cena was considered for Evolution. Like, absolutely yes, for about 120 seconds and then we moved on to something else but it was brought up and it is a very interesting, fun kind of fantasy thing to ponder of like, well what if it wasn’t turned down so quickly? What if that actually happened? And the chain reaction domino effect with Randy’s career, John’s career, everything that would have come out of that.

Later in the discussion, Gewirtz was asked if he would ever consider writing for another wrestling company again. He’s enjoying working for Seven Bucks Productions and all that comes with it but provided a ‘never say never’ answer to the question.

You know, here’s the thing… there’s a standard answer for that question [if he would write for another wrestling company], anything when it comes to the wrestling business. You know, the three magical words, ‘never say never’. I don’t have any intention on it. I feel like, you know, I’ve done it. I’d like to think I’ve done it well and I had a lot of fun doing it, a lot of ups and downs but mainly it was pretty much a blast. I love what I’m doing now, creating and pitching television shows, unscripted, scripted, dramas, comedies, docuseries for Dwayne [‘The Rock’ Johnson] and Dany [Garcia’s] Seven Bucks Production so, this is really — it’s not something that I thought would happen, wanting to be a writer but I’m glad it did so yeah, I don’t really have any plans on it but you know, like they say, never say never.

There’s an interview with Gewirtz here on the POST Wrestling site that was conducted by John Pollock. To watch that conversation, click here.

If the quotes in this article are used, please credit The Kurt Angle Show with an H/T to POST Wrestling for the transcriptions.

Automatic Bot - December 7, 2022 0
I hate getting sucked into Time’s Person of the Year debate, which is basically a giant publicity stunt. But here I am.The annual...
Go to mobile version