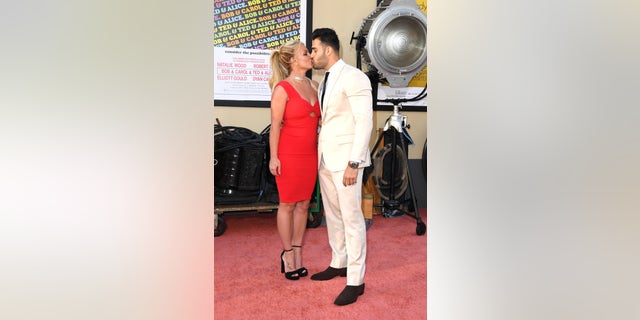 Oh baby, baby…how was she supposed to know?

Britney Spears says the Catholic Church would not marry her and now-husband Sam Asghari, because she is not Catholic.

The “Baby One More Time” singer shared a since-deleted Instagram of an unidentified couple getting married in a church, with a caption claiming her original plans where to get married there.

She wrote, “I wanted to go every Sunday… it’s beautiful and they said it was temporarily shut down due to COVID!!!! Then 2 years later when I wanted to get married there they said I had to be catholic and go through TEST!!!!”

Britney Spears and Sam Asghari got married earlier this summer. The event was a star-studded affair.
(Getty Images)

The couple, who wed at Spears’ home in June, shared photos of the event which was attended by a bevy of stars, including Selena Gomez, Paris Hilton, and Donatella Versace, who also designed the bride’s wedding dress.

Britney expressed her disappointment with the Catholic Church, writing on the same deleted post, “Isn’t church supposed to be open to all????”

According to Britney Spears, the Catholic Church denied her wish to get married to Sam Asghari in the church, because she is not Catholic.
(Getty Images)

Back on Aug. 5, 2021, Spears declared in a since-deleted Instagram post that she is Catholic and goes to Mass.

Britney Spears has been outspoken about the limitations she endured under her conservatorship, which allegedly included the inability to have a child with Sam Asghari.
(Getty Images)

Spears and Asghari got engaged last September after dating for several years.

Just seven months after announcing their engagement, Spears and Asghari revealed they were pregnant in April.

In May, the pop-star announced she and her then fiancé had lost their pregnancy, a month before their wedding.

Spears had previously claimed that her 13-year conservatorship had prevented her from trying to have more children.

Spears’ father, Jamie Spears, who predominately controlled his daughter’s conservatorship, is estranged from Spears, and did not attend the wedding. Neither did Spears’ mother or her two siblings.