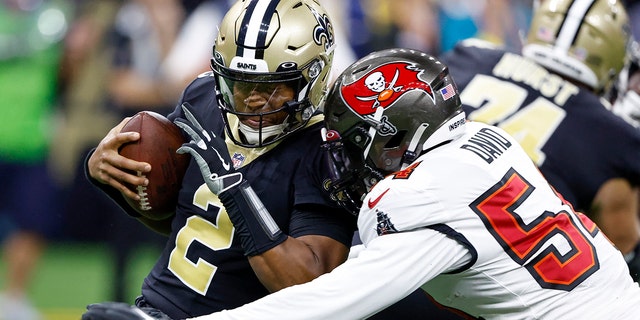 Tempers flared in Sunday’s game between the Tampa Bay Buccaneers and New Orleans Saints, and the rivalry and ultra-competitiveness continued when the game was over.

Even while the game was tight, White said all the team needed to do was to wait until Winston made a mistake. He referenced the 30 interceptions Winston threw in 2019 before he left the Bucs and joined the Saints.

“When Jameis left our team, everybody knows what he did that last year. And we felt like we had a great defense then, and he threw 30 picks,” White said. “We just knew he’d give us the ball, we knew the running backs cough it up. That’s something we came in talking about. We want 30 turnovers as a ball club ourself, so this was just another game to go attack the ball.”

The Buccaneers capitalized off a big Winston mistake.

Tom Brady had the go-ahead touchdown pass to Breshad Perriman in the fourth quarter and then Mike Edwards would return an interception for a touchdown.

Winston had three interceptions in the game. He didn’t have any in the team’s Week 1 victory over the Atlanta Falcons.

The Buccaneers have only allowed 13 points so far this season. They defeated the Dallas Cowboys, 19-3, last week.

The morning read for Wednesday, Sept. 28

Taliban official pushes for Afghan girls to be able to

Michael Chriswell - October 1, 2022 15
This episode is about the critical need for perseverance among Christians, both for promises now, and the terrible times ahead! My name is...
Go to mobile version