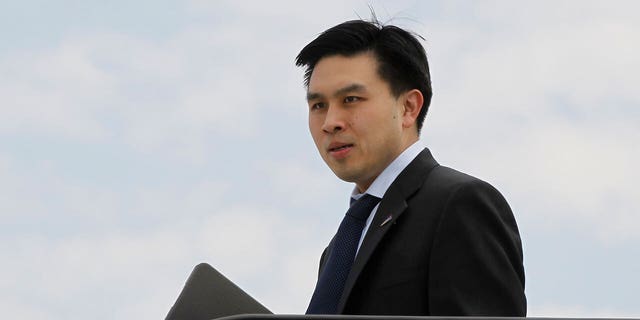 In their quest to win back statewide office in deep-blue California, Republicans have set their sights — and money — on controller candidate Lanhee Chen.

The race usually attracts little attention compared to other statewide offices, but this year, without an incumbent in the running, contributions to Chen and Democratic candidate Malia Cohen have far outpaced the last election cycle.

Chen, a former policy adviser to Mitt Romney’s presidential campaign, has crafted himself as an independent manager who can bring order to the state’s finances. Cohen, who serves on a state tax board, says her past role leading the San Francisco Board of Supervisors’ budget and finance committee makes her uniquely qualified for the job.

LANHEE CHEN: THE CA STATE CONTROLLER NEEDS TO BE A WATCHDOG NOT A LAPDOG

Chen has defied the path of recent Republican candidates in the heavily Democratic state. He’s raised more money than Cohen and his fellow Republicans seeking state office. He won the June primary against four Democrats who split their party’s vote.

That’s led to optimism he could help his party break its California drought, but Chen faces strong headwinds. California hasn’t elected a Republican statewide since 2006 and there are nearly twice as many registered Democrats.

“It’s an uphill battle, no matter what,” said Pete Peterson, who ran as a Republican for secretary of state in 2014 and now serves as dean of Pepperdine University’s School of Public Policy. He won 46% of the vote that year, the closest Republicans have come to victory in 16 years.

The controller serves as California’s fiscal watchdog, with the power to disburse state funds and audit government agencies. They also serve on more than 70 boards and commissions, including one that incentivizes renewable energy production and another that gives bonds to nonprofit colleges.

The candidates are vying to succeed Democrat Betty Yee, who’s been in the job since 2015 and previously served on the state Board of Equalization, which administers tax and fee programs. Cohen, the board’s chair, hopes to follow that same path to the job.

Chen has never held elected office, something he says makes him less beholden to any particular party, though he’s advised multiple GOP campaigns. He was appointed by former Democratic President Barack Obama to a board overseeing social security and is a public policy fellow, now on leave, at Stanford University’s Hoover Institution.

California’s high cost of living, public education, homelessness, public safety, gas taxes and fraud at the state’s unemployment agency are all within the realm of issues a controller could address, Chen said.

“All of these challenges in some ways can be affected positively by a controller who will focus on bringing greater transparency, greater accountability to how our state spends taxpayer dollars,” Chen said.

Cohen, meanwhile, sees an opportunity to expand the role of controller by looking for patterns revealed in agency audits and pushing for solutions to prevent problems from happening again.

Cohen said she wants to be “on the team that is going to be solving the gaps.”

Both pointed to the more than $20 billion of fraudulent unemployment benefits California gave to criminals as evidence of how the state’s money could be better managed.

Chen came out on top in the June primary, though the Democrats collectively won more votes. Republicans tend to do better in primary races compared to the general election, said Mindy Romero, director of the University of Southern California’s Center for Inclusive Democracy. Winning the primary in a divided field still has its benefits.

“It gives more attention to the Republican candidate, raises his profile, and maybe he might have a role in the party going forward,” she said.

By the end of the September deadline to report campaign contributions, Chen had raised nearly $1.4 million more than Cohen for the year.

Chen, who must try to keep supporters of former President Donald Trump on his side while broadening his appeal, waited until after the primary to say he never voted for Trump.

But Chen said he supports abortion access, and campaign manager Matt Ciepielowski said Chen would not have the power or inclination to restrict abortion access.

Chen’s campaign, meanwhile, has released an online ad calling into question Cohen’s financial management skills. It references reporting by the Los Angeles Times that found a condo Cohen purchased in 2006 was foreclosed on and her social media consulting firm had its license suspended for tax issues.

Cohen defended herself against the Chen campaign’s criticism of her financial background, saying the business license issue was tied to a change of address and was resolved.

“Some may try to exploit my experience with foreclosure during the financial crisis for political gain, but as I said in 2010, it’s why I ran for office,” she tweeted after the Times article published. “I understand the pain that millions of Californians underwent and I have dedicated my career to ensuring it never happens again.”