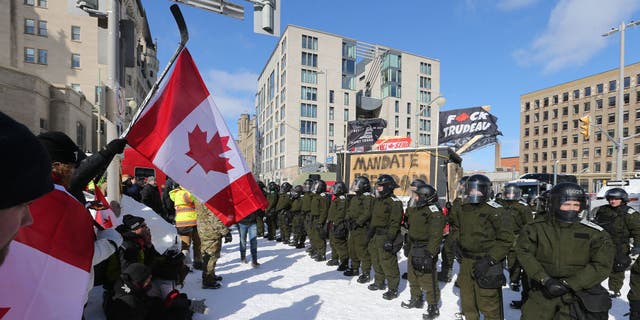 A group of Canadian clergy sent an open letter to Canadian Prime Minister Justin Trudeau earlier this week rebuking him for invoking the Emergencies Act to quell the Freedom Convoy and for other actions they described as “tyrannical.”

“We are writing to you as representative pastors of Christian congregations from across the nation and as law-abiding citizens who respect the God-defined role of civil government and uphold the Canadian Charter of Rights and Freedoms, the highest law of our land, which recognizes the supremacy of God over all human legislation,” read the letter, which was signed by 29 clergymen and remains open for other Canadians to sign.

Explaining their repeated, earnest attempts to prayerfully redress their grievances with all levels of government regarding “indefinite suspension of civil liberties, coercive mandates and perpetual state interference in the life, freedom and worship of the church,” the pastors denounced Trudeau for cracking down on the Freedom Convoy instead of hearing them out. They emphasized that members of the clergy are a part of the convoy.

Ottawa Police move a line of protesters from the intersection at Sussex and Rideau Streets in Ottawa, Ontario, on Feb. 18, 2022.
(Steve Russell/Toronto Star)

“The Ottawa protest has presented your government with a wonderful opportunity to meet with and speak to ordinary Canadians lawfully and peaceably requiring the restoration of their constitutional rights,” they wrote.

“However, in response to their singing, praying, dancing, candy floss, bouncy castles, speeches about the Constitution and outpourings of patriotic love for the country, your government has not only refused to meet with these citizens to hear their concerns, you have insulted, denigrated and lied about them, further dividing a hurting and broken nation.”

The pastors went on to rebuke Trudeau and his government for seemingly believing that they have the authority to bestow and remove fundamental rights at will.

Ottawa Police move a line of protesters from the intersection at Sussex and Rideau Streets in Ottawa, Ontario, on Feb. 18, 2022.
(Steve Russell/Toronto Star)

“Your government does not grant people the right to their bodily integrity, the right to work or earn a living, the right to decide for their children or to be with their families or dying loved ones, the right to gather to worship and obey God, the right to travel in their own land or enter and leave. Civil government exists to protect these pre-political and fundamental freedoms, not bestow and remove them as if it can function in the place of God.”

The pastors also condemned Trudeau “in the strongest possible terms” for his “unprecedented” invocation of the Emergencies Act to stop the Freedom Convoy protests and blockades. “There is no national emergency and to invoke one to crush peaceful political dissent is a totalitarian act of repression displaying weakness not strength,” they said.

“These tyrannical actions are exposing this government and people to the judgment of God, and we are deeply concerned that you do not appreciate the significance of God’s wrath upon a rebellious and lawless nation,” they warned in closing.

The pastors concluded by urging Trudeau “to repent of the sins of pride, rebellion against God, and bearing false witness.”

“You have not displayed a brotherly care and love for these honest hard-working people who have tried to peacefully bring their very serious concerns to your attention,” they added.

Video circulated widely on social media Friday of police decked out in riot gear cracking down on convoy protesters in Ottawa by arresting them, tear-gassing them, and deploying officers on horseback through the crowds.

Among the signatories of the open letter was Rev. Tim Stephens, who was arrested twice last year in front of his family when his Fairview Baptist Church in Calgary continued to congregate. His second arrest, which happened after a police helicopter found his church gathering outside, prompted Sen. Josh Hawley, R-Mo., to send a letter to the U.S. Commission on International Religious Freedom (USCIRF) urging it to consider adding Canada to its watch list.

The pastoral letter was organized by Liberty Coalition Canada, a Christian activist organization that was also behind the initiative urging ministers in Canada and the United States to devote their sermons on Jan. 16 to denouncing Bill C-4. The new Canadian law carries a potential five-year jail sentence for counseling that does not affirm homosexuality and transgender identity.

Approximately 5,000 churches joined in the protest from the pulpit, which took place less than a week before the first convoy departed for Ottawa from Prince Rupert, British Columbia, on Jan. 22.