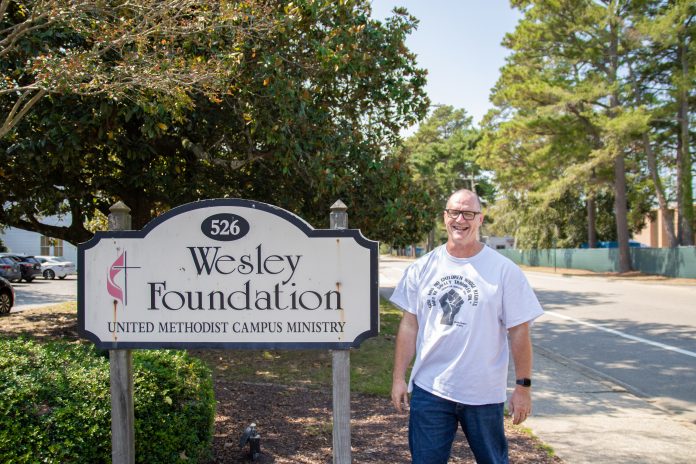 Next to the Williamsburg United Methodist Church on Jamestown Road is a small house with a welcoming community, a pride flag out front and a passion for acceptance and inclusivity. This is the Wesley House, part of the Wesley Foundation and campus ministry sponsored by the United Methodist Church. Campus Minister Max Blalock has led the house since 2010, and in that time has seen tremendous growth in the House and in himself.

For years the Wesley Foundation at the College has been home to the campus food exchange, has provided residential and parking services for students and most recently has supported the dining workers union. The Wesley House champions radical inclusivity, seeking to support all students no matter their background.

“One of the things that’s become very clear through the years, especially with not only trying to provide community, but trying to be proactive and especially supporting students who are more marginalized or more on campus, is that when it all boils down to it, I have a really simple job, and my job is to try to ensure that as much as I can, as many students as possible are safe and well taken care of,” Blalock said.

Blalock recognizes that campus ministries are often perceived as trying to convert people to Christianity. However, the Wesley House seeks a different kind of conversion, one that nurtures the moral and ethical center in people to do the common good, especially for the most marginalized communities. This is reflected in the mission statement, which was created over eight years ago and took over a year to perfect.

“We believe God creates a human family; every person is a recipient of God’s grace; and God intends for us to be a community that embodies love, reconciliation, and justice,” the Wesley Foundation mission statement reads. “Thus, we welcome people of all races, nationalities, sexual orientations, gender identities, faiths, and theological identities. Through following Jesus, we embrace God’s radical hospitality towards all.’”

“We believe god creates a human family; every person is a recipient of god’s grace; and god intends for us to be a community that embodies love, reconciliation, and justice.”

Blalock explained that the mission statement, especially the last line, propels the Wesley House as a community. The Wesley House accepts all students as long as they seek to promote the ideals in the statement.

Blalock grew up in Alabama and attended seminary in California. Through meeting people from all over the world and of different backgrounds and identities in California and  Williamsburg, Blalock developed his ideology of love for all people and radical inclusivity.

“I realized that my job simply as a person is not to convert anybody to any perspective that I have or not, but is simply to love people, to care for people and to work for justice and equity for people,” Blalock said. “That’s absolutely part of my faith, too.’”

Blalock says the most transformative part of his work at the College and the reason he has stayed is the students.

“As far as who I am and how understand my faith and how I understand what it means to be a campus minister, all those things that have been so transformed because of relationships with students, particularly students who are LGBTQIA+ and particularly students who are transgender,” Blalock said. “Students have been so graceful in building relationships with me, and that has helped to transform me. I mean, I think I’m a much better person and I’m a much better pastor now after being here for twelve years.’”

One of the biggest initiatives of the Wesley House is to support students. In March 2020, the College closed due to the COVID-19 pandemic and students had to find off-campus housing. The Wesley House provided accommodations for students who could not safely return to their homes and has continued to do so during academic semesters and breaks.

“Since January of 2020, through August of this year, there wasn’t a single day that students weren’t living in this house,” Blalock said.

In addition, the basement of the Wesley House holds the campus food exchange where students and faculty can receive necessary food and supplies, free of charge and completely confidential. After the student organization Food for All won the College’s Impact Week last semester, they partnered with the Wesley House to install a large refrigerator on the first floor to hold leftover food from campus activities and events.

Outreach initiatives by the Wesley House, like the food exchange, seek to address systemic inequities instead of doing charitable deeds one at a time.

“The mantra I use is that so much of inequality and inequity and injustice that is, across the board, whether you’re talking socioeconomic or racial or whatever… My mantra is it’s intentional, it’s systemic and it’s ongoing,” Blalock said. “So, if we’re going to have solutions that actually change things, then our solutions are going to have to be intentional, systemic and relentless.’”

The Wesley House has partnered with Grove Christian Outreach to serve the historically underserved African American community at Grove in Williamsburg. They have also met with civil rights activists, environmental activists and the Justice Department in Alabama to learn about systemic inequities facing the region.

Recently, the Wesley House supported initiatives to deliver food to students quarantined with COVID-19 and has provided a space for the dining workers union to meet.

Blalock reflected that the work and vision statement of the Wesley House has not been without pushback. In 2019, a global gathering of the United Methodist Church, the only decision-making body for the entire church, reaffirmed its homophobia and tightened restrictions on same-sex marriage. Not long after, the Wesley House put a rainbow banner out front.

“We need to make it clear just as our vision statement and mission statement says. But we need to be even more clear with this happening that this is who we are as a community, even though the United Methodist Church is something else,” Blalock said.

Blalock refers to himself as a follower of Jesus rather than as a Christian. He especially embraced this label after reading “White Too Long” by Robert B. Jones, which describes a survey linking white supremacy to Christianity in the United States.

“The evolution for me is that I no longer call myself a Christian because I believe white Western Christianity is too intertwined with white supremacy and it’s a failed religion,” Blalock said. “So, I call myself a follower of Jesus. That’s where that moral and ethical center arises from in following Jesus, and that’s very different from the white Western Christianity that I’ve been raised.’”

As a white, straight, cisgender, able-bodied man, Blalock seeks to use his privileges to transform the lives of others in a commitment to doing good.

“When you’re focused on loving your neighbors, yourself and you’re working hard, particularly to focus on — as Jesus did — the folks who were the most marginalized in the community and try to work to work together with them for transformation of the entire community, that’s what’s key for me,” Blalock said.

“WHEN you’re focused on loving your neighbors, yourself and you’re working hard, particularly to focus on — as jesus did — the folks who were most marginalized in the community and try to work together with them for transformation of the entire community, that’s what’s key for me.”

According to Blalock, the only thing that has stayed the same from when he came to the College 12 years ago is the time the Wesley House holds its activities — 5:00p.m. and 7:00p.m. on Sundays.

In the future, Blalock will continue to follow the lead of students as the Wesley House grows and evolves in its mission to support and care for marginalized students.

“We have created a community where students, particularly students like that, have a place and have people who are going to support them, that’ll love them and care for them, and that continues to be one of the greatest gifts,” Blalock said.

Florida AG says it’s ‘not rocket science’ why so many