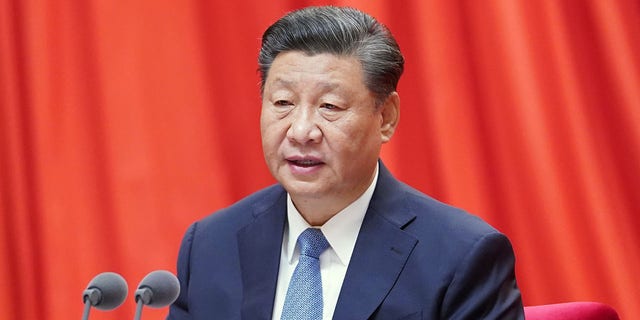 The Chinese government, using its Foreign Ministry Department and state-run media, praised the Taliban for providing “better security” to Afghans while also slamming the United States on the one-year anniversary of the Taliban’s takeover of the country.

“Several interviewees pointed out to the Global Times that the Taliban’s administrative capabilities are comparatively more advanced, but the ‘tribal culture’ still holds great sway in their governing style,” the article stated. “They said the security situation in the country has improved since Taliban took power.”

The article also claimed that the country has seen a “reduction in violence” since last year’s power shift which has “allowed Kabul to maintain the basic functioning of urban life.”

China leader Xi Jinping’s speech to mark the 100th anniversary of the CCP left experts sounding the alarm over the American press’ coverage of the communist nation.
(Xinhua/Shen Hong via Getty Images)

One person interviewed by the outlet claimed that health care services are more accessible to people in rural areas now that the Taliban is in control.

The article also criticized U.S. sanctions on Afghanistan and blamed the move for the economic troubles in the country while also pointing out that China is “offering a helping hand” to the country in the form of investments.

“The ‘Kabul moment’ marks the failure of the ‘democratic transformation’ imposed by the US,” spokesman Wang Wenbin said in a Monday briefing. “A country’s path to democracy can only be explored by that country’s own population independently in light of their national conditions. The path to democracy varies from country to country, and will not work if it is imposed from the outside. Forcing the US-style democracy on a country has invariably led to dysfunction and failure of its implementation.”

The White House did not immediately respond to a request for comment from Fox News Digital.

China is yet to officially recognize Afghanistan’s new hard-line government but has refrained from the harsh criticism made by the U.S. and has not hid its ambitions of playing a major role in the country’s stability and development.

Politicians on both sides of the aisle in the United States marked the anniversary of the Afghanistan withdrawal by expressing regret for how the operation transpired.

“I certainly don’t think the withdrawal had to go as it did, and the loss of American lives during the withdrawal, and the degree to which it took months and months, and we continue to try to help people escape from Afghanistan, I think could have been handled differently,” Democratic Chairman of the House Permanent Select Committee on Intelligence Adam Schiff told CBS News’ “Face the Nation” on Sunday.

Former President Trump referred to the pullout, which cost the lives of 13 U.S. service members, as “the most embarrassing, incompetent, and humiliating event in the history of the United States.”

Taliban fighters guard at the site of an explosion in Kabul, Afghanistan, Saturday, June 18, 2022. Several explosions and gunfire ripped through a Sikh temple in Afghanistan’s capital.
(AP Photo/Ebrahim Noroozi)

A spokesperson for President Biden’s National Security Council drafted a memo this week defending the administration’s withdrawal, writing that the president “refused to send another generation of Americans to fight a war that should have ended long ago,” according to a copy of the document obtained by Fox News Digital.

“Bringing our troops home strengthened our national security by better positioning us to confront the challenges of the future and put the United States in a stronger place to lead the world,” National Security Council spokesperson Adrienne Watson, who worked for the Democratic National Committee and Hillary Clinton’s 2016 presidential campaign before joining the White House last year, wrote in the report.

Automatic Bot - October 1, 2022 0
Cuba's government has made a rare request for emergency assistance from the administration of U.S. President Joe Biden after Hurricane Ian knocked out...
Go to mobile version