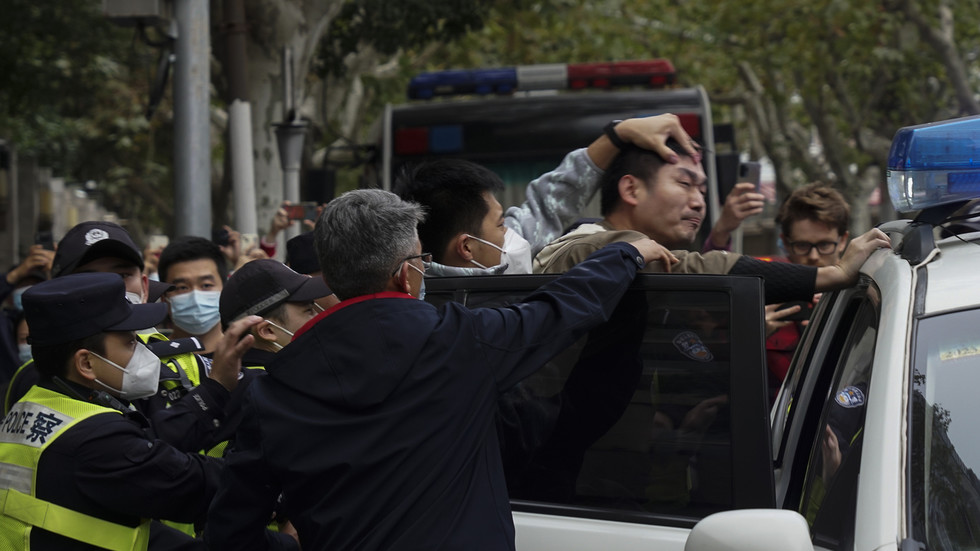 Establishment politicians and media outlets have praised the ‘freedom-loving’ Chinese, after demonizing those who spoke out against their own lockdowns

“It’s really important that citizens be able to make themselves heard, that they are protesting on a specific issue that touches on so many others – of government control of authoritarian states – we, of course, stand with those protesters,” Canadian Prime Minister Justin Trudeau said this week in response to the ongoing protests in China against the government’s zero-Covid policy. Where was Trudeau’s support when those of us living in France back in March 2020 were ordered into our homes for over two months under the threat of hefty fines, and allowed only to go out with a personal-trip certificate that entitled the bearer to leave home for one of a few select reasons? Either you were performing a professional activity that couldn’t be done remotely, going to a grocery store (where lineups outside were mandated to ensure social distancing inside), going to the doctor, or attending to an urgent family matter. You could also go out for one hour of individual exercise, once a day, but it had to be within one kilometer of your home.

Trudeau and his fellow Western leaders adopted their own zero-Covid measures by various degrees. Not one of them denounced the others as authoritarian for effectively placing people under house arrest and depriving them of their freedom to move, assemble, protest, work, and make decisions about their own health and well-being without involving the state.

Trudeau himself went as far as invoking the Emergencies Act against anti-mandate ‘Freedom Convoy’ protesters and their supporters, who demanded equal treatment and access to work and travel for both the vaccinated and the unvaccinated, treating them like terrorists and ordering bank accounts blocked.


Now that the protesters fighting against Covid-related crackdowns are in China, the Western establishment sympathizes with them in a way that they could never bring themselves to do with their own citizens. “At the heart of China’s protests against zero-Covid, young people cry for freedom,” wrote CNN this week. But back in March 2020, while reporting that France was going into a lockdown in which “all non-essential outings are outlawed and can draw a fine,” CNN just reported matter-of-factly that “France goes into lockdown after Macron promises to protect businesses.” Earlier this year, CNN reported that “Europe’s loud, rule-breaking unvaccinated minority are falling out of society.” Suddenly, those loud folks crying for freedom from their government’s heavy-handed Covid policies are just a bunch of hooligans.

The UK’s Daily Mail recently referred to China’s “Covid revolution,” but when an estimated 10,000 protesters took to the streets of London in August of 2020 to demonstrate against lockdowns and mandates, the newspaper dismissed them as “conspiracy theorists.”

Sky News has said of the uprising in China that “after living with extreme restrictions for months, many citizens have had enough.” However, in September 2020, the same news outlet qualified British protesters as anti-lockdown conspiracist nutjobs and hoaxers.

German state broadcaster Deutsche Welle referred to the Chinese uprising as an “extraordinary moment in China” that’s “spreading further,” but last December, the same outlet described protests at home against German government restrictions as “illegal” and said that they were becoming “more militant.”


On French television earlier this week, I heard a commentator say that the Chinese government sought to displace the blame for the uprising onto Western foreign interference, of which he was totally dismissive. But where were these same experts to denounce Canadian officials when they were delegitimizing protesters’ concerns by speculating that they could simply be the useful tools of meddling American populists? But when the government suggesting foreign interference is China, that idea is dismissed out of hand.

Western press reports have also zeroed in on arrests and beatings of Chinese protesters by the authorities.  Where was their criticism of the reported loss of at least 24 eyes and five hands during police crackdowns on French protesters in recent years in response to overreaching government policies?

This week, European Council President Charles Michel flew to Beijing to meet with Chinese President Xi Jinping as Europe seeks to develop trade relations in an economically fragile and precarious time for the bloc amid an energy crunch and inflation that threaten its deindustrialization. European officials had said that they wanted him to confront the Chinese leader on his Covid measures, according to Politico. Where exactly is he going to find the moral authority to do that? Last year, Michel was calling on Europe to fight against citizen resistance to jab mandates.

When their own fellow citizens are standing up to rapidly growing government oppression, the Western establishment is all too quick to denounce them while defending the loss of fundamental rights enacted by self-described democracies that have been behaving like anything but. But when the same phenomenon is unfolding in China – well, you can’t stop the spread of freedom, right?

The statements, views and opinions expressed in this column are solely those of the author and do not necessarily represent those of RT.