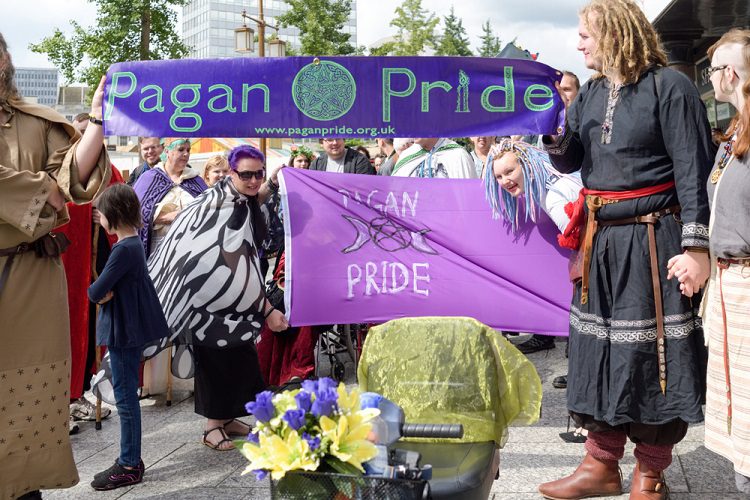 Years ago, Ode and I attended the Pagan Pride Day celebrated in Grand Rapids in Mid-September. We are looking forward to going to the 22nd Annual Pagan Pride this year. Pagan Pride is fun because we gather with other Witches and Pagans, buy witchy wares from talented artisans and learn new things or gain fresh perspectives on familiar topics.

But what stands out in memory from years ago are the Christian Protestors who harassed us at that event. Aggressive individuals surrounded Ode and me in the parking lot before we could enter. Later, a man stood on the edge of the area with a megaphone. People tried to engage him in discourse to no avail.

We ran into a young man Ode knew from High School who escorted us back to our car when we were ready to leave because we felt so nervous and uncomfortable leaving the boundary of the event area. And while we still enjoy Pagan events (mostly pre-Covid), it’s this caustic interaction with Christian protestors that overshadows the memory.

Why am I bringing this unfortunate incident up now? Because WitchFest USA 2022 experienced an even more disruptive presence this past July. And I confess, it concerns me as we emerge from two years of Covid-enforced event cancellation or hiatus that we may see more of these persistent protests in coming years.

According to the event coordinator, Starr Anne RavenHawk, a group of thirty individuals (all dressed in red t-shirts) entered WitchFest’s permitted area, loudly disrupting classes, shopping, and people’s overall experience. It’s reported that RavenHawk tried to reason with the Christians, and even the police were called in at some point, but the protestors were not asked to leave. Rather, the responding police officers said they had a “right to free speech.” As one attendee remarked, the police had an opportunity to bring order and “chose not to de-escalate the situation.”

Since 2016, similar protests of Pagan and Witch events have been growing around the country. Street preachers with their bullhorns, pamphlets on attendees’ cars, or slotted under room doors for events held at a hotel or conference center.  They are becoming bolder and more intimidating in their actions and language. This is true in other areas where Christians have become loud in their protestations.

A Washington Post article written by Heather Greene describes similar past incidents, including a Church men’s group who surrounded and used their physical presence to intimidate attendees at a small event in Auburn, AL. I find the increase in harassment in Pagan event spaces over the last six years troubling but not surprising.

A while back, I wrote a post celebrating how much more accepted witchcraft and paganism have become in the public consciousness. Certainly, there are folx who remain in the broom closet for various reasons (including personal safety); however, many live and work openly as Witches, Pagans, Heathens, et al., with very little difficulty in their lives.

However, this does not mean we do not have to fight for the right to practice our beliefs in open spaces or at sponsored Pagan or Witchcraft public events. Ravenhawk had to persist for years, answering ridiculous questions, to get the permits for WitchFest USA approved.

Witchcraft and Paganism are growing and popular (even mainstream). But we must never become complacent about the reality that Christian Nationalism is also on the rise. Zealots such as the “man from Tennessee” who made headlines in February for book-burning or the Texas preacher who is now encouraging Christians to “take a stand against Witchcraft” at a Pagan Market in October aren’t going away any time soon.

These individuals and others like them rally their “devotees” under a rallying cry that is a veiled call for theocracy: a system of government in which priests rule in the name of God or a god. There is no room for anything that doesn’t fit their religious/political agenda. Their version of Evangelical Christianity is the only true religion (never mind the hundreds of other Christian denominations or other religions/spiritual paths practiced in America).

Nationalist Christians consider themselves in a “spiritual battle” for social and religious supremacy. They rail against the LGBTQ+ community, women’s equality, reproductive health, voting rights, and many other “hot-button” issues.  All you have to do is listen to some of the more militant speakers (who draw large audiences via social media). Their viewpoint is clear. To them, witchcraft and paganism are evil. Period.

Strategies for Dealing with Protestors

So, with all this being said, we should not allow these individuals to push us out of public spaces. As Tony Mierzwicki writes in a blog post, we do enjoy religious freedom in this county.  Christian protestors may not respect our right to practice our spiritual paths, but it is protected. That being said, as Witches and Pagans, we have to realize these invasions into or around our public events are likely to increase.

Therefore, we should have a plan on how we are going to handle situations as they arise. The coordinators of WitchFest USA did everything right but still had disruption, attendees who did not feel safe, and public authorities who appeared to have sided with the intruders.

But this does not mean we give up or allow Nationalist Christian zealots to have the last word. So, here are a few ideas as we go to Pagan events where protestors may choose to plant themselves:

You are a sovereign being. Celebrate your spiritual path. In spite of them.

Obviously, if an event becomes unsafe due to protestors, it is time to leave. Even so, Witches and Pagans have a right to be seen in public. We have the right to speak, sing, teach, celebrate, congregate and sell stuff in the market square. If we work together and strategize in advance, we can keep ourselves as safe as possible at Pagan and Witch community events.

ESPN - January 28, 2023 0
On The Right Time with Bomani Jones podcast, Bomani and Spencer Hall discuss if Brock Purdy is the answer for the 49ers, will ... source
Go to mobile version