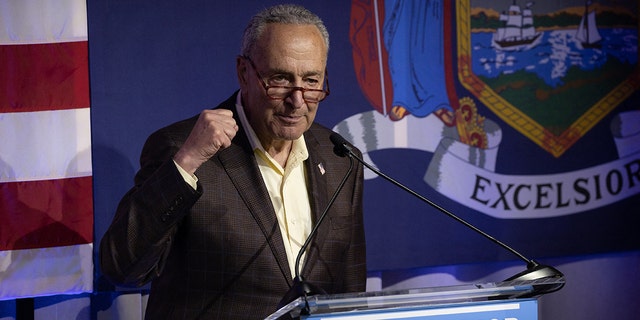 Senate Majority Leader Chuck Schumer (D-N.Y.) tested positive for COVID-19 over the weekend as the Senate prepares to reconvene this week.

In a statement on Sunday, Schumer’s spokesperson Justin Goodman said the Senate is returning to work following a two-week recess but Schumer will remain quarantined at least through the end of the week as he is experiencing “very mild symptoms.”

The legislative body’s highest-ranked Democrat intends to work remotely while he is away from the chamber.

“Consistent with the CDC guidance, Leader Schumer will quarantine this week and work remotely,” Goodman said on Sunday.

“Anyone who knows Leader Schumer knows that even if he’s not physically in the Capitol, through virtual meetings and his trademark flip phone he will continue with his robust schedule and remain in near-constant contact with his colleagues,” he added.

Schumer is fully vaccinated and has received multiple booster shots, the spokesperson said.

“As we do every week, we will provide any updates to the Senate floor schedule as the week progresses,” he continued.

Schumer will not be the only senior Democrat missing from the Senate as Sen. Patrick Leahy (D-Vt.) remains at home as he recovers from recent hip surgery.

Leahy was discharged from the hospital last week.

THIS JULY 4TH, COVID IS STILL KILLING HUNDREDS OF AMERICANS EACH DAY

The Senate is ideologically split 50-50 between Democrats and Republicans but with two Democrats missing from the chamber, Republicans hold a 50-48 temporary edge.

Schumer’s positive test comes as the omicron variant of COVID-19, and specifically its BA.5 subvariant, has become dominant strain across the country.

Everyone Uses Faith to Some Degree (Part 1)

Wayne Levi Price - The Last Generation - February 4, 2023 6
Bless You All - To help with a DONATION Go TO: Main Website: http://WeAreTheLastGeneration.com​ Thanks Backup Channel: https://www.youtube.com/channel/UCxAzprKnPkGSeFiOWxAZnMg Thank you so very much. It helps more than...
Go to mobile version