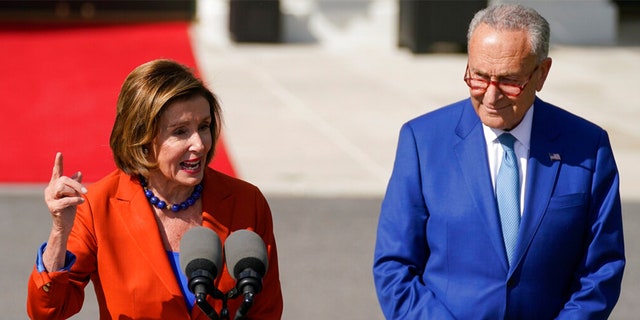 House Speaker Nancy Pelosi, D-Calif., announced she is stepping down from congressional Democratic leadership, Thursday. Her decision not to seek re-election was met with celebration by conservatives on Twitter.

“Nancy Pelosi is shown bi-partisan respect and media fawning despite her wretched reign over the House.  She was no uniter. She never demonstrated respect for our system. She always had a nasty comment.  So, the rewriting of her true legacy begins already.  A sham,” Levin tweeted.

Senate Majority Leader Chuck Schumer of N.Y., listens as House Speaker Nancy Pelosi of Calif., speaks during an event where President Joe Biden will sign H.R. 5376, the Inflation Reduction Act of 2022, on the South Lawn of the White House in Washington, Tuesday, Sept. 13, 2022.
(AP Photo/Andrew Harnik)

J. Bradford Williams, a conservative commentator and founder of “thebradfordfile,” pointed out that throughout Pelosi’s time in the House of Representatives, she has enriched herself.

“Nancy Pelosi has spent 35 years amassing a $200 million fortune at the expense of the people. She is everything that is wrong w ‘public service’ in America,” he wrote.

House Speaker Nancy Pelosi applauds President Trump during a State of the Union address to a joint session of Congress at the U.S. Capitol in Washington.(Photographer: Doug Mills/Pool via Bloomberg)

Tom Fitton, president of Judicial Watch, criticized Pelosi for weaponizing the power of her office to target her political opponents.

“Nancy Pelosi is the only House Speaker in history to abuse her office to try to jail her party’s political enemies,” Fitton said.

The January 6 Committee, created under Pelosi’s leadership, has taken unprecedented steps to refer former Trump administration officials to the Department of Justice after they declined a subpoena to participate in the committee’s investigations.

A split photo of former U.S. President Donald Trump during a campaign rally on October 09, 2022 in Mesa, Arizona and House Speaker Nancy Pelosi on October 6, 2009 at the White House in Washington, DC.
(Mario Tama/Getty Images/MANDEL NGAN/AFP via Getty Images)

“Nancy Pelosi not being speaker anymore makes the 2022 election cycle a huge win for Republicans,” Tim Young, a conservative author and comedian, wrote after Pelosi’s announcement.

During her tenure, Pelosi passed President Barack Obama’s Affordable Care Act, denied congressional funding to President Donald Trump’s border wall, presided over two impeachments of Trump that failed to lead to his removal from office, and secured the passage of much of President Joe Biden’s legislative agenda during the first half of his administration.

Joe Silverstein is a production assistant for Fox News Digital.