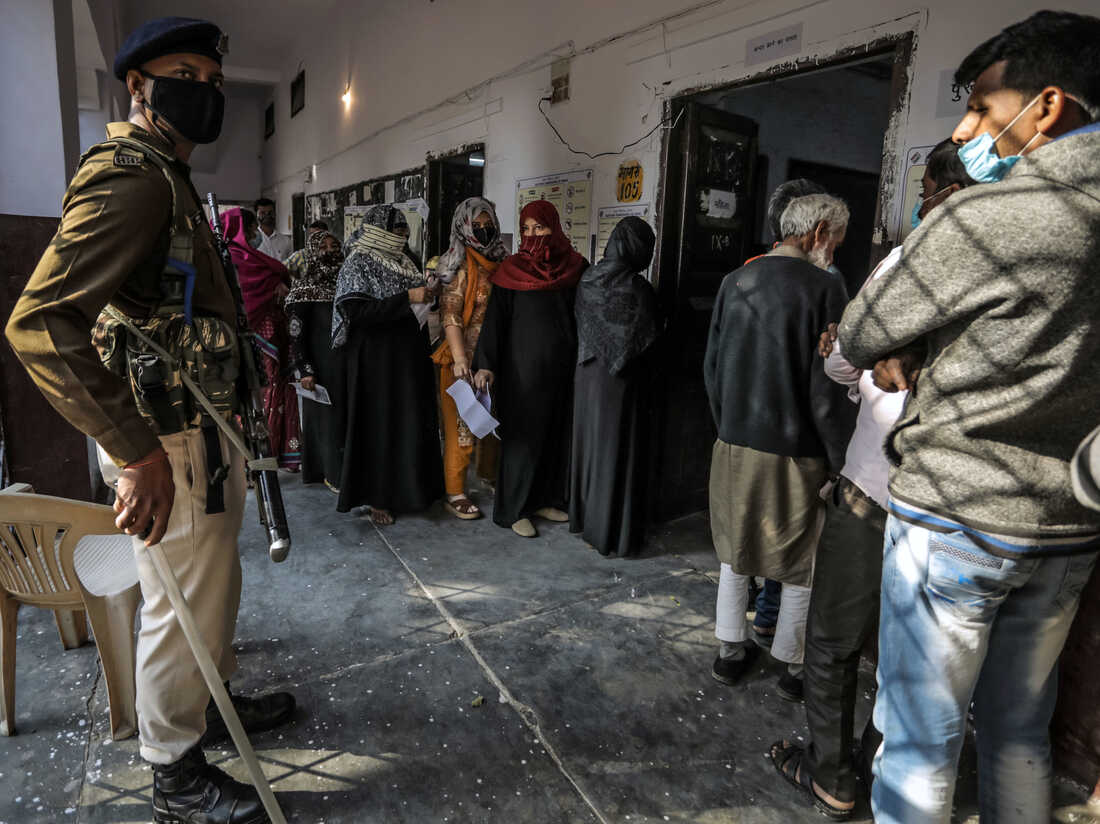 People queue to vote at a polling station in February in Lucknow. India’s most populous state, Uttar Pradesh, is holding state elections as the ruling Hindu nationalist Bharatiya Janata Party of Narendra Modi looks to defend its majority.

People queue to vote at a polling station in February in Lucknow. India’s most populous state, Uttar Pradesh, is holding state elections as the ruling Hindu nationalist Bharatiya Janata Party of Narendra Modi looks to defend its majority.

LUCKNOW, India – Five years ago, prospective landlords in Mumbai recoiled when Kajal Singh told them where she was from.

Singh grew up in Meerut, a city in India’s most populous state, Uttar Pradesh. Both her hometown and home state had a reputation for crime. They’re where the gangsters are from in Bollywood movies.

So when Singh moved to Mumbai for a job with an airline, she had trouble renting an apartment. No one would trust a tenant from her state, she found.

“I started telling them I’m from a different place, not U.P. I used to lie!” she admits, laughing.

Five years later, in a visit to friends in Uttar Pradesh’s capital Lucknow, she finds a different situation. She and her friends are able to socialize at a roadside tea stall at night — something Singh, 23, says she would not have felt safe doing before.

“But now things have changed,” she says. “Now I can proudly say I’m from U.P. Now we are feeling safe.”

Crowds turn out to cheer India’s Prime Minister Narendra Modi during a road show in support of Uttar Pradesh state elections on Friday in Varanasi, India.

Crowds turn out to cheer India’s Prime Minister Narendra Modi during a road show in support of Uttar Pradesh state elections on Friday in Varanasi, India.

A dramatic drop in crime is part of what Prime Minister Narendra Modi’s Hindu nationalist party is running for reelection on in local elections this month. Singh, for one, cites it as the reason the party will have her vote. Most opinion polls predict the party will win in Uttar Pradesh — one of five Indian states voting this month.

According to India’s National Crime Records Bureau, rape, murder and theft fell in 2020 to their lowest levels in Uttar Pradesh since 2013. Preliminary data from 2021 shared by Uttar Pradesh police suggests the trend has continued.

With more than 200 million residents, Uttar Pradesh is bigger than all but a handful of countries. The results of these elections will be examined as a bellwether of Modi’s own reelection chances in 2024.

But political scientists say the government’s crime data is opaque, incomplete and probably biased. Human rights groups say any perception of safer streets in Uttar Pradesh has come with — or possibly because of — a spike in police brutality against minorities.

While many residents say their streets feel safer, some of their Muslim neighbors — members of India’s largest minority group — say they have never felt less safe.

Policemen stand outside the entrance to Shri Krishna Janmasthan temple in February in Mathura in India’s Uttar Pradesh state.

Policemen stand outside the entrance to Shri Krishna Janmasthan temple in February in Mathura in India’s Uttar Pradesh state.

Uttar Pradesh police say aggressive policing has lowered crime. They’ve been flooding the streets with officers. In a public service announcement on TV, state police promise to respond to any call for help or any crime tip in 15 minutes or less.

The lyrics go like this: “All the thieves, gangsters and looters have been wiped out.”

Those lyrics hark back to a promise Adityanath made shortly after winning power in 2017. He promised to “knock down” criminals if they didn’t mend their ways. Ominously, he predicted that more suspects would kill themselves in police custody under his administration. And he sought to link crime to those working in now-illegal cow slaughterhouses. That’s shorthand for Muslims, who often work in India’s leather industry.

Much of what he promised has come true.

“In the time that Adityanath has been chief minister, there have been more extrajudicial face-offs between the police and purported criminals, and a number of people have been shot dead and killed in these police encounters,” says Milan Vaishnav, author of When Crime Pays: Money and Muscle in Indian Politics.

Between March 2017, when Adityanath took office, and August 2021, Uttar Pradesh police say they shot and injured at least 3,302 alleged criminals in 8,472 extrajudicial face-offs, known in India as “police encounters.” Many suspects were shot in the legs. At least 146 died, police say. Some custodial deaths have been labeled by police as suicides.

The numbers reflect a more than tenfold increase in annual police encounters in Uttar Pradesh, says retired police inspector S.S. Darapuri. He spent 32 years in the Indian Police Service, most recently in Uttar Pradesh. Before 2017, he says, there were at most 100 or 150 extrajudicial confrontations a year.

State police say the increase in these violent encounters reflects their “zero-tolerance policy” and deters crime.

But the result can also be skewed crime statistics. Suspects might get punished before they’re even charged. Immediate police action might lead some victims not to press charges, meaning the crime may never be recorded.

Darapuri, 78, has become a human rights activist since he retired from the police force, and is now critical of his former colleagues. He says officers allegedly frame suspects, then mete out “instant justice” against their personal enemies or those they’ve profiled unfairly.

“It is a repressive, persecuting attitude of the police, who enjoy so much power and misuse it,” he says. “Instead of protecting rights, they themselves violate rights.”

In Uttar Pradesh, Muslims are disproportionately targeted by police

In 2019, four United Nations human rights experts wrote to the Indian government, expressing concern about extrajudicial police killings in Uttar Pradesh and noting a “pattern” of “individuals allegedly being abducted or arrested before their killing, and their bodies bearing injuries indicative of torture.”

Modi’s BJP is perhaps most famous for its push to make India a Hindu nation. That means prioritizing the rights of the roughly 80% of Indians who follow Hinduism – often to the detriment of the country’s minorities, who include Muslims, Christians and Sikhs.

In Lucknow, where the centuries-old palaces of India’s past Muslim rulers still stand, a senior Muslim lawyer rattles off a long list of names of victims of police violence. Most are minorities.

“If you consider police brutality to be a crime, then crime in U.P. has actually gone up,” says Mohammad Shoaib, 74.

Faisal Husain, 18, was one of them. He died in police custody last May in his rural hometown of Bangarmau.

“After Friday prayers, he went to the market to try to sell lemons,” his mother, Naseema Bano, who is in her 50s, says tearfully in the courtyard of her tiny brick home. “But police hauled him away.”

Police handed Husain’s body back to his family the next day, claiming he’d had a heart attack. The family says his skull was crushed. His crime: violating COVID lockdown rules.

The vegetable market in Bangarmau, Uttar Pradesh, where Faisal Husain, 18, was arrested in May 2021 for allegedly violating COVID-19 lockdown rules. He died in police custody.

The vegetable market in Bangarmau, Uttar Pradesh, where Faisal Husain, 18, was arrested in May 2021 for allegedly violating COVID-19 lockdown rules. He died in police custody.

Uttar Pradesh police did not respond to NPR’s requests for comment.

Uttar Pradesh police have been politicized

Darapuri, the retired police inspector, says the department “is becoming more and more subordinate to political bosses” since Adityanath’s election in 2017. Some officers may feel pressure to compete for politicians’ favor, he says.

“Things have totally changed. Now, even a petty politician can threaten a senior officer, and if you do not submit to their wishes, then they will accuse you of being a follower of the other political party,” he says. “So the situation is very worrisome. Police are acting like muscle men of the goondas [corrupt politicians]. They are hardly bothered about their own image, nor the rights of the common man.”

Darapuri says there’s also a problem with recruitment. Many police recruits come from small villages across Uttar Pradesh, where caste and clan rivalries pervade. They bring those biases with them, he says.

In addition, state government data show that Adityanath’s administration has hired more members of the chief minister’s own Thakur caste and other dominant castes to top police jobs, over members of other castes.

Adityanath, who himself faced criminal cases including murder charges earlier in his political career, is accused by opposition politicians and human rights groups of using his government powers to clear his own criminal record. As chief minister, he has clearly stated that his goal is to prioritize the safety of his state’s Hindu community.

That sets the tone for police, Darapuri says, and it skews crime data even more. Minorities are scared of police. They’re less likely to call for help — and less likely to expect justice from the system.

This scenario may sound familiar to Americans, who’ve had their own reckoning with police violence against minorities in recent years.

“What’s slightly different in the Indian case, though, is that there’s not a sense of public outrage,” Vaishnav says. “There are many people [in Uttar Pradesh] who are willing to tolerate police violence, police brutality, if the outcome is a perception of safer streets.”

In the case of Husain, who died in police custody last May, there’s a ray of hope.

“We are very confident we’ll get justice in the courts for my brother,” says his sister Kushnuma Bano, 28.

The reason she’s confident is that security cameras were in the market where Husain was arrested last May, and in the police station where he was held. Some of his neighbors got hold of what they say is the footage.

Mohammad Ayan, Faisal Husain’s brother, sits between parents Islam Husain and Naseema Bano. Ayan wants to study law. “I want to fight for justice for cases similar to my brother’s,” he says.

Mohammad Ayan, Faisal Husain’s brother, sits between parents Islam Husain and Naseema Bano. Ayan wants to study law. “I want to fight for justice for cases similar to my brother’s,” he says.

In grainy video they showed to NPR, the authenticity of which could not be independently verified, a police officer pulls into a vegetable market on a motorbike. The officer wields a bamboo rod and lashes at a smaller man, whom neighbors identify as Husain. Two officers then load him onto the back of the motorbike and drive away. He does not appear to resist arrest.

Another clip, purportedly from security cameras at the local police station, shows the man neighbors say is Husain stumbling across a courtyard. It’s the last image of him alive.

The vegetable market in Bangarmau, Uttar Pradesh, where Faisal Husain, 18, worked as a seller.

The vegetable market in Bangarmau, Uttar Pradesh, where Faisal Husain, 18, worked as a seller.

This video is part of the evidence being presented in a rare police brutality lawsuit against Uttar Pradesh police, filed by lawyers for Husain’s family. The officer identified in the video, Vijay Chaudhary, is now behind bars facing a murder charge. He denies any wrongdoing. Testimony in his trial begins in March.

Husain’s 15-year-old brother, Mohammad Ayan, says he’s been unable to concentrate on his schoolwork since his brother’s death. But he wants to study law.

“I want to fight for justice for cases similar to my brother’s,” he says.