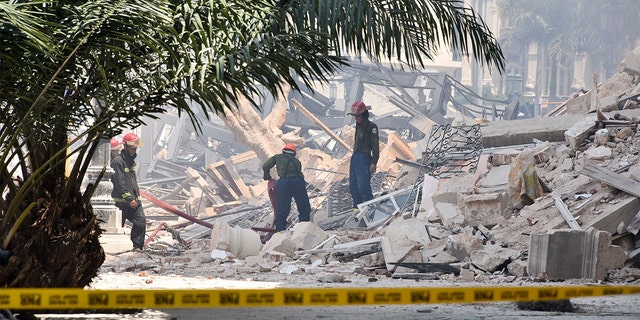 A massive explosion at the Hotel Saratoga in Havana, Cuba on Friday has left at least 26 dead, the country’s government says.

Search and rescue operations at the luxury property – where up to 13 are reported missing – remain ongoing as “people may still be trapped,” it added.

Rescuers work after an explosion in the Hotel Saratoga in Havana, Cuba, on Friday, May 6.
(Adalberto Roquea/AFP via Getty Images)

“Preliminary investigations indicate that the explosion was caused by a gas leak,” Cuba’s government said in a tweet.

Local health officials confirmed 26 people have died and dozens injured in the blast.

Images posted on social media showed part of the exterior of the hotel completely destroyed, revealing the insides of its rooms.

The five-star Hotel Saratoga is heavily damaged after an explosion in Old Havana, Cuba, on Friday, May 6.
(Adalberto Roquea/AFP via Getty Images)

Videos showed smoke billowing into the sky as a crowd gathered to survey the destruction.

The 19th century, five-star property has 96 rooms, two bars, two restaurants and a rooftop pool, according to the Associated Press.

“The investigations continue and everything indicates that the explosion was caused by an accident,” Cuba’s government said.

Rescuers work following the explosion on Friday, May 6.
(Adalberto Roque/AFP via Getty Images)

Several of the injured were reported to have been taken to a local hospital.

Havana’s mayor also said children from a school adjacent to the hotel have been safely evacuated.

Photographer Michel Figueroa told the Associated Press he had been walking past the hotel when “the explosion threw me to the ground, and my head still hurts…. Everything was very fast.”

Cuban President Miguel Díaz-Canel Bermúdez is seen in front of the Hotel Saratoga following the explosion.
(Office of the President of Cuba)

Yazira de la Caridad, mother of two, said the explosion shook her home a block from the hotel: “The whole building moved. I thought it was an earthquake,” she said. “I’ve still got my heart in my hand.”

Mayiee Pérez said she had rushed to the scene after receiving a call from her husband, Daniel Serra, who works at a foreign exchange shop inside the hotel. She said he told her, “I am fine, I am fine. They got us out,” but had been unable to reach him since.

Editor’s note: This story has been updated to reflect the latest death toll number.