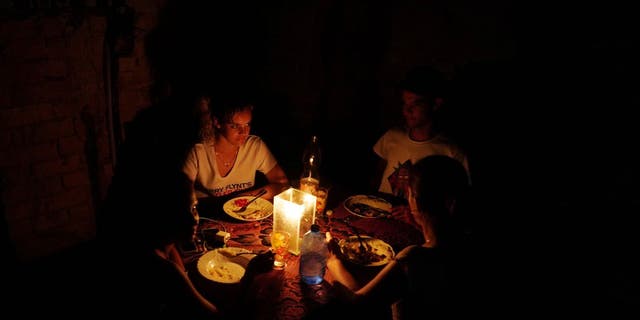 Cuba’s government has made a rare request for emergency assistance from the administration of U.S. President Joe Biden after Hurricane Ian knocked out power to the whole island of 11 million people, the Wall Street Journal reported on Friday.

Hurricane Ian tore through the island nation on Tuesday, causing country-wide blackouts, flattening homes and destroying agricultural fields. Cubans have staged protests against the government over the power loss, which heightened concerns over ongoing food, fuel and medicine shortages.

A family has dinner during a blackout in the aftermath of Hurricane Ian in Havana, Cuba, Sept. 28, 2022.
(REUTERS/Alexandre Meneghini)

Washington has assessed that Cuban authorities would place priorities on hospitals, water pumping facilities, sanitation and other critical infrastructure if the Biden administration were to provide aid, the Wall Street Journal reported, citing a review of email communications.

The State Department did not immediately respond to a request for comment on the report, nor did Cuba’s embassy in Washington.

Hurricane Ian plunged all of Cuba into darkness after downing the island’s power network. Electricity was gradually returning on Sept. 29, but many homes remain without power.
(Photo by ADALBERTO ROQUE/AFP via Getty Images)

Biden has promised to re-engage with Cuba after years of tensions between Havana and Washington. But Cuba’s crackdown following widespread protests on the island last July led instead to sanctions on Cuban officials.

The Cuban government blamed the protests on meddling by the United States.