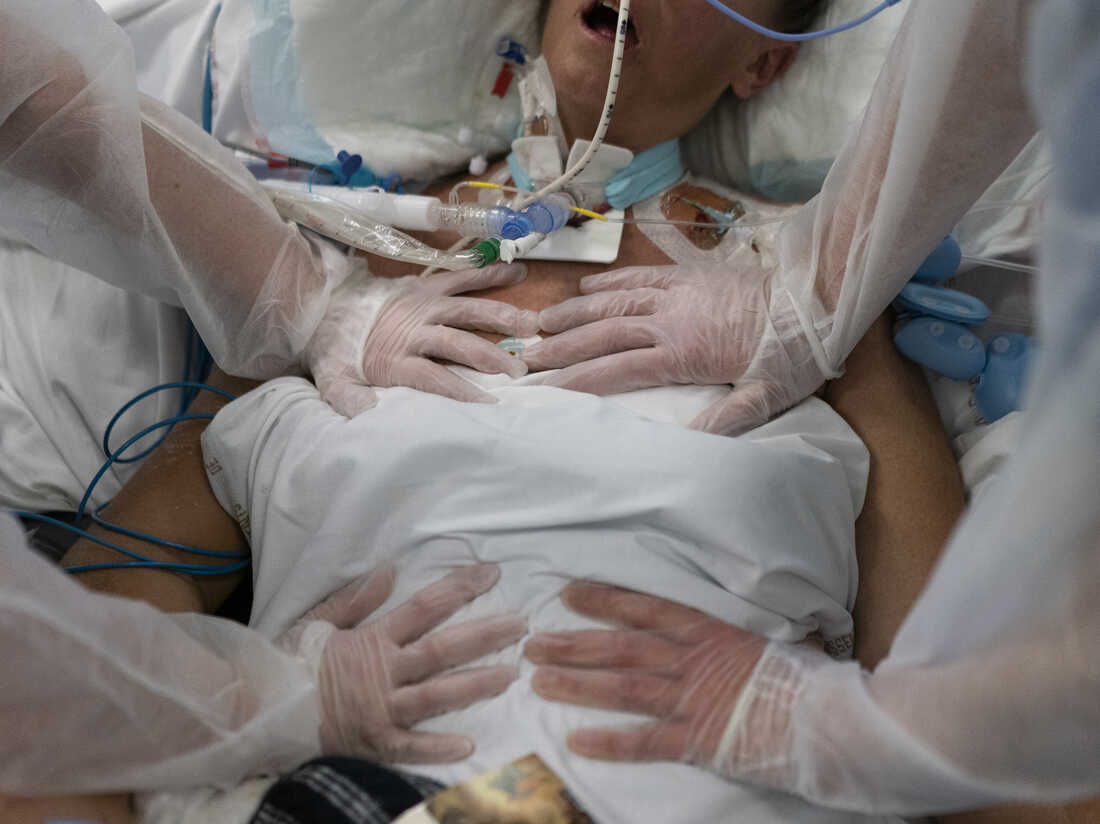 Nurses perform timed breathing exercises on a COVID-19 patient on a ventilator in the COVID-19 intensive care unit at the la Timone hospital in Marseille, southern France on Dec. 31, 2021.

Nurses perform timed breathing exercises on a COVID-19 patient on a ventilator in the COVID-19 intensive care unit at the la Timone hospital in Marseille, southern France on Dec. 31, 2021.

BANGKOK — The official global death toll from COVID-19 is on the verge of eclipsing 6 million — underscoring that the pandemic, now entering its third year, is far from over.

The milestone is the latest tragic reminder of the unrelenting nature of the pandemic even as people are shedding masks, travel is resuming and businesses are reopening around the globe. The death toll, compiled by Johns Hopkins University, stood at 5,999,158 as of Monday midday in Asia.

Remote Pacific islands, whose isolation had protected them for more than two years, are just now grappling with their first outbreaks and deaths, fueled by the highly contagious omicron variant.

Hong Kong, which is seeing deaths soar, is testing its entire population of 7.5 million three times this month as it clings to mainland China’s “zero-COVID” strategy.

As death rates remain high in Poland, Hungary, Romania and other Eastern European countries, the region has seen more than 1 million refugees arrive from war-torn Ukraine, a country with poor vaccination coverage and high rates of cases and deaths.

And despite its wealth and vaccine availability, the United States is nearing 1 million reported deaths on its own.

Death rates worldwide are still highest among people unvaccinated against the virus, said Tikki Pang, a visiting professor at the National University of Singapore’s medical school and co-Chair of the Asia Pacific Immunization Coalition.

“This is a disease of the unvaccinated — look what is happening in Hong Kong right now, the health system is being overwhelmed,” said Pang, the former director of research policy and cooperation with the World Health Organization. “The large majority of the deaths and the severe cases are in the unvaccinated, vulnerable segment of the population.”

It took the world seven months to record its first million deaths from the virus after the pandemic began in early 2020. Four months later another million people had died, and 1 million have died every three months since, until the death toll hit 5 million at the end of October. Now it has reached 6 million — more than the populations of Berlin and Brussels combined, or the entire state of Maryland.

But despite the enormity of the figure, the world undoubtedly hit its 6 millionth death some time ago. Poor record-keeping and testing in many parts of the world has led to an undercount in coronavirus deaths, in addition to excess deaths related to the pandemic but not from actual COVID-19 infections, like people who died from preventable causes but could not receive treatment because hospitals were full.

Edouard Mathieu, head of data for the Our World in Data portal, said that — when countries’ excess mortality figures are studied — as many as nearly four times the reported death toll have likely died because of the pandemic.

An analysis of excess deaths by a team at The Economist estimates that the number of COVID-19 deaths is between 14 million and 23.5 million.

“Confirmed deaths represent a fraction of the true number of deaths due to COVID, mostly because of limited testing, and challenges in the attribution of the cause of death,” Mathieu told The Associated Press. “In some, mostly rich, countries that fraction is high and the official tally can be considered to be fairly accurate, but in others it is highly underestimated.”

The United States has the biggest official death toll in the world, but the numbers have been trending downward over the last month.

Lonnie Bailey lost his 17-year-old nephew, Carlos Nunez Jr., who contracted COVID-19 last April — the same month Kentucky opened his age group to vaccinations. The Louisville resident said the family is still suffering, including Carlos’ younger sibling, who had to be hospitalized himself and still has lingering symptoms. The aggressive reopening of the country has been jarring for them to witness.

“For us it is hard to let our guard down; it’s going to take a while for us to adjust,” Bailey said.

The world has seen more than 445 million confirmed COVID-19 cases, and new weekly cases have been declining recently in all regions except for the Western Pacific, which includes China, Japan and South Korea, among others, the World Health Organization reported this week.

Although the overall figures in the Pacific islands seeing their first outbreaks are small compared to larger countries, they are significant among their tiny populations and threaten to overwhelm fragile health care systems.

“Given what we know about COVID … it’s likely to hit them for the next year or so at least,” said Katie Greenwood, head of the Red Cross Pacific delegation.

Tonga reported its first outbreak after the virus arrived with international aid vessels following the Jan. 15 eruption of a massive volcano, followed by a tsunami. It now has several hundred cases, but — with 66% of its population fully vaccinated — it has so far reported people suffering mostly mild symptoms and no deaths.

The Solomon Islands saw the first outbreak in January and now has thousands of cases and more than 100 deaths. The actual death toll is likely much higher, with the capital’s hospital overwhelmed and many dying at home, Greenwood said.

Only 12% of Solomon Islanders are fully vaccinated, though the outbreak has provided new impetus to the country’s vaccination campaign and 29% now have at least one shot.

Global vaccine disparity continues, with only 6.95% of people in low-income countries fully vaccinated, compared to more than 73% in high-income nations, according to Our World in Data.

In a good sign, at the end of last month Africa surpassed Europe in the number of doses administered daily, but only about 12.5% of its population has received two shots.

The Africa Centers for Disease Control and Prevention is still pressing for more vaccines, though it has been a challenge. Some shipments arrive with little warning for countries’ health systems and others near the expiration date — forcing doses to be destroyed.

Eastern Europe has been particularly hard hit by the omicron variant, and with the Russian invasion of Ukraine, a new risk has emerged as hundreds of thousands of people flee to places like Poland on crowded trains. Health officials there have been offering free vaccinations to all refugees, but have not been making them test upon arrival or quarantine.

“This is really tragic because great stress has a very negative effect on natural immunity and increases the risk of infections,” said Anna Boron-Kaczmarska, a Polish infectious disease specialist. “They are in very high stress, being afraid for their lives, the lives of their children, they family members.”

In India, where the world was shocked by images of open-air pyres of bodies burned as crematoria were overwhelmed, the scars are fading as the number of new cases and deaths has slowed.

India has recorded more than 500,000 deaths, but experts believe its true toll is in the millions, primarily from the delta variant. Migrants from India’s vast hinterland are now returning to its megacities in search of jobs, and the streets are packed with traffic. Shopping malls have customers, albeit still masked, while schools and universities are welcoming students after a months-long gap.

In Britain, infections have fallen since an omicron-driven surge in December, but remain high. England has now lifted all restrictions, including mask mandates and the requirement that all who test positive isolate at home.

With about 250,000 reported deaths, the African continent’s smaller death toll is thought to stem from underreporting, as well as a generally younger and less mobile population.

“Africa is a big question mark for me, because it has been relatively spared from the worst so far, but it could just be a time bomb,” Pang said, noting its low vaccination rates.

In South Africa, Soweto resident Thoko Dube said she received news of the deaths of two family members on the same day in January 2021 — a month before the country received its first vaccines.

It has been difficult, but “the family is coping,” she said. “We have accepted it because it has been happening to other families.”