A devout Jewish man was silenced when a Christian evangelist shared Jesus with him in stunning wisdom.

In one of the The Living Waters President, Emeal (“E.Z.”) Zwayne’s evangelizing mission, he encountered a Jewish man named Davin. The Jew was confident about his beliefs and he had an interesting discussion with the Christian evangelist.

E.Z. began sharing the Gospel with him through the question, “Do you every step back and ask yourself ‘what is the meaning of life?’” Davin confidently answered, “the meaning of life is this, help many people as you can. Live every day the best you possibly can.”

Soon, the Jew professed that he believed in a power greater than him. And when E.Z. asked him where he got his values from, he was amused.

With this, E.Z. shares tips with believers on how to share the Gospel effectively with people like Davin. And that is never hesitate to “ask questions.” Because it will make people pause and think twice about what they stand for. 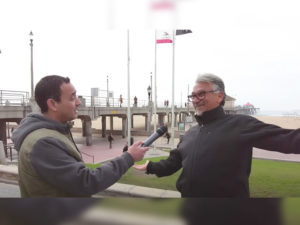 Later on, Davin proudly discussed about his religion Judaism. Then the Living Waters President asked if he was good enough to enter God’s Kingdom based on Judaism. The Jew faintly laughed, perhaps surprised by the tricky question.

“That’s a question I can’t answer. You have to ask God that,” he said.

GOD’S WORD FOR YOU TODAY: HE HAS MADE YOU FREE

His answer then paved the way for E.Z. to ask about life after death, whether one would go to heaven or hell in eternity. The Jew responded that going to hell doesn’t concern him at all because he doesn’t believe in the existence of eternity. But the evangelist didn’t back down as he truly cared for his soul. So, he immediately shared the Gospel with him. And when E.Z. mentioned the name of Jesus, it displeased him.

Watch what happened in their conversation and learn how to share and defend your faith with people like Davin.

Start your day together with God and the GOD TV team. Get a daily devotional and encouraging 2-3minute video direct to your inbox.

China says it will crack down on ‘hostile forces’ as