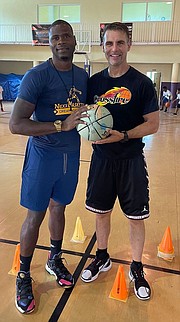 CAMP director JR Cadot said when his NEXT Basketball organisation decided to put on their inaugural Dream Again Basketball Camp, he knew it would be an extraordinary camp.

The camp, which got started on June 27 at the Remnant Tabernacle of Praise auditorium, shifted into another gear with the participation of American Randy Shepherd yesterday.

Shepherd, a former professional travelling team-mate of Cadot on the international basketball circuit, took the opportunity to address the campers on the importance of putting their faith and trust in God.

Shepherd, a founder of CrossFire, an organisation known for sharing Jesus through different ministries, was invited by Cadot to be a part of the camp.

“I’m just so blessed to be here and I’m so proud of JR for putting on his first camp,” Shepherd said.

“We’ve had the chance to travel around the world, but I’m getting older, so it’s so good to be able to sow into young men like him and they can carry on the Gospel of Jesus through this silly game of basketball.”

Although he has benefitted tremendously from the game, Shepherd said to him, it’s a “silly game” compared to spreading the Gospel of Jesus Christ and that is why he is so devoted to the cause.

“I told them basketball will fail them one day,” he said.

“There are 500,000 high school basketball players in the United States of American, but only 42,000 will get a basketball scholarship. “So, we want to incorporate the importance of knowing the word of God because they will have something to fall back on when basketball has failed them because one day, they won’t get to play this game again.”

For its initial year, Cadot said he’s been pleased with the turnout.

“We thank God for the campers who have showed up,” Cadot said.

“We intend to give them the opportunity to listen to some professionals in all aspects of life, but especially from the Christian perspective because we believe that there is more to life than playing basketball.

“We want to teach them about life skills,” Cadot said.

“So, we will be focusing on their fundamentals and teaching them the important aspects of life.”

Having reunited with Shepherd, who hails out of North Carolina, Cadot said he remembers how they travelled through Asia sharing the gospel.

While Shepherd arrived here on Saturday, Cadot said he was glad to get him in before he moves around to the other camps before he departs on Friday.

Since the camp got started, Grand Bahamian pro basketball player Willis Mackey Jr has been assisting Cadot and he said he has been impressed by what he’s seen.

“I’m just glad to be able to come in here and help Cadot to guide these youngsters because I’ve learned a lot from playing overseas and this is a good opportunity to share my experience,” Mackey Jr said.

“I have had a chance to see Randy Shepherd in action and I’m so glad that he came here to impart some of his knowledge to the campers.

“I’m also learning as he goes along because there is some stuff that I could use in teaching the youngsters not just in this camp, but any other that I get the opportunity to participate in.”

At least three of the campers interviewed were thrilled by what they got out of the camp so far.

Delmaro Deal, a 14-year-old student at St Augustine’s College, said Cadot is a very good coach and he’s willing to get some experience from him. “I’ve learned how to play defence and work on my ball-handling and shooting the basketball,” Deal said.

“I also thought the presentation today was very good. It’s something that I can add to when I’m playing basketball.”

Achim Colebrooke, a 12-year-old student of Kingsway Academy who will be transferring to St Andrew’s School, said the camp has been very educational for him.

“I want to choose basketball as my sport (to participate in) and try to become good at it,” said Colebrooke, who also plays soccer and tennis. “It’s fun and I am learning a lot of things about basketball.

“Plus, the gentleman (Shepherd) told us that if we believe in God, we can do anything.”

Ian Mills, a nine-year-old student of St Andrew’s School, said he decided to join the camp to better his basketball skills.

“I’ve learned dribbling and exercise techniques,” Mills said. “I also liked how the gentleman told the student about God. It was very good.”

Cadot, the camp administrator, said the numbers have been quite impressive so far for the camp.

“A lot of parents come here and say they can’t afford to have their son sitting home playing video games, so they register them,” said Thompson, a student at Velencia College in Orlando, Florida where she is studying bio-medical science.

“So, this is a good location for the camp.”

Cadot said at the end of the camp on July 15, they hope that they can continue the process of developing the “future leaders” of the country.

“We wanted to put this camp on to inspire, encourage and to build the self-esteem and a strong faith in God in these youngers,” he said.

Russia accuses US of ‘direct’ participation in Ukraine