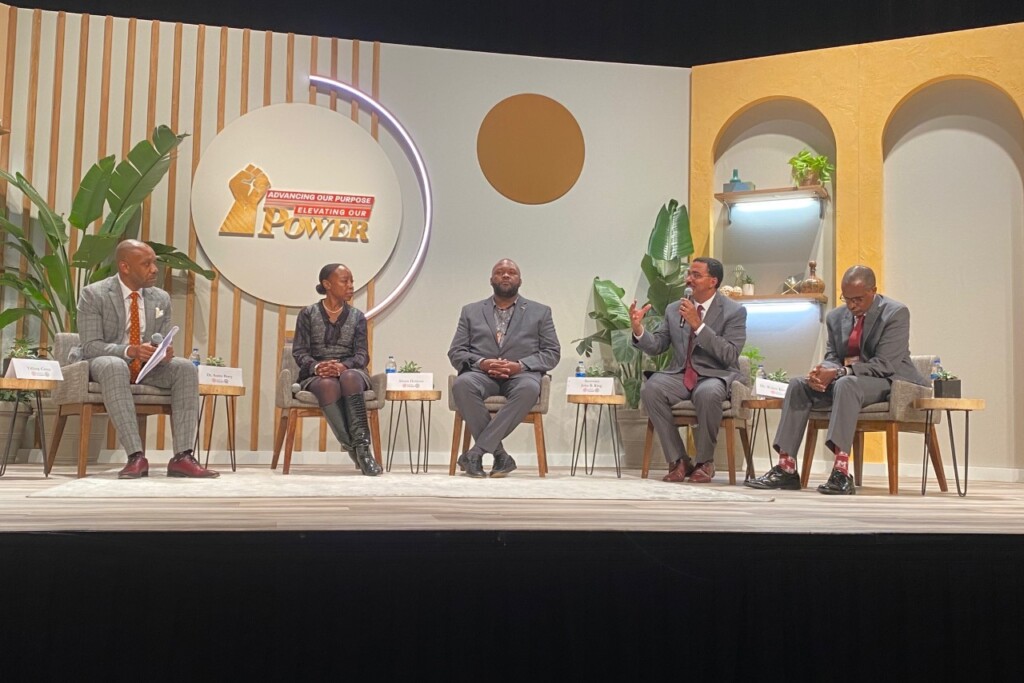 Former U.S. Education Secretary John King Jr. calmly walked on stage at a national conference in Washington, D.C., Friday to offer recommendations on how states can end the school-to-prison pipeline.

About five minutes after he walked down some steps, he turned around and joined a second panel talking about ways to end student debt, especially for Black students when they graduate from a college or university.

“Yeah, we covered a lot of ground, which is nice,” King, president of The Education Trust, said in a brief interview after the 90-minute discussion and another 20 minutes chatting and taking pictures with attendees.

King, a Silver Spring resident who sought the Democratic nomination for governor this year, was one of several people who participated on panel discussions at the Congressional Black Caucus Foundation’s 51st annual legislative conference at the Walter E. Washington Convention Center in D.C. It marked the first time the event, which attracts scores of prominent Marylanders, was held in person since 2019.

King joined seven other panelists around the education topics, which was hosted by U.S. Rep. Frederica Wilson (D-Fla.), a member of the Black Caucus since 2011.

The sessions also connect with Wilson serving as chair of the U.S. Commission on the Social Status of Black Men and Boys, which was created a few months after George Floyd was killed by Minneapolis police in May 2020.

Wilson established the “5000 Role Models of Excellence Project” in 1993 when she served on a local school board in South Florida. Its continued focus: support youth and young adults ages 9 to 19 with discipline issues in school or come from underprivileged backgrounds, particularly Black and brown youth.

After a few laughs, the discussion became serious.

King handled the first question on how to dismantle the school-to-prison pipeline, a practice that disproportionately distributes discipline to Black and brown students, many of whom who end up in jail or prison.

The Montgomery County resident said changes are needed in policy, practice and staffing. He said some states have policies that allow school administrators to suspend students for “willful defiance.”

“Nobody knows what willful defiance means,” he said. “That gets used in conjunction with teacher bias to put kids out of the classroom.”

High school students who later attend college can accumulate hundreds of thousands of dollars in debt after they graduate.

Andre Perry, senior fellow at the Brookings Institution, a liberal think tank, said public school teachers should have all their debt forgiven.

King agrees, especially for college graduates who seek to enter the teaching profession and educate children in urban, rural and impoverished communities.

“Teachers are so vital to our country, the health of our economy and ultimately our democracy,” King said after the discussion. “If you look at our international peers, they invest in the teaching profession and make it affordable for folks to become a teacher. We should be doing that in the United States.”

After King completed the two panel discussions, chatted with dozens of people and posed for pictures with those same individuals, he summarized in an interview on what he learned in his quest to seek the Democratic nomination for Maryland governor. It was his first time as a political candidate.

“I left the campaign experience very hopeful about our ability to bridge some of the partisan divides,” he said. “When you talk to folks in their community about the things they are worried about, they are the same across different regions.”

“Even though folks may not see the problem as shared but it’s a shared problem,” he said.

His most optimistic view from campaigning came from young people who were focused on proposed changes to gun laws, climate change and the criminal justice system.

“Young people are fired up,” said King, who also teaches education policy to undergrad students at the University of Maryland in College Park. “It’s on leadership to tap into that energy and show we are going to take on these big challenges they are marching and organizing around.”

Some voters said King and his running mate Michelle Siri were strong candidates, but they still came in sixth place with 24,882 votes in the July primary election.

King acknowledged it takes plenty of money to spread a campaign message through social media, television and radio advertising.

“The candidates that were able to raise the most money, able to get the ads out [and] communicate the most to voters was a huge advantage for them,” he said.

But King remains proud of the work his campaign articulated in challenging the state’s “status quo,” such as proposing stronger legislation to battle climate change.

His campaign proposed a “Green New Deal” and opposed all natural gas pipelines in a pledge for Maryland to use clean electricity by 2030 and hit net-zero carbon emissions by 2035. It also staked out sweeping positions on health care reform, which may have tamped down his support.

He continued: “When you look at climate change, we are already seeing worse hurricanes, wildfires, flooding. It’s all going to get worse. We can’t see this as a 20 years from now, 30 years from now problem. It requires immediate, urgent action. I’m glad that we were talking about that.”