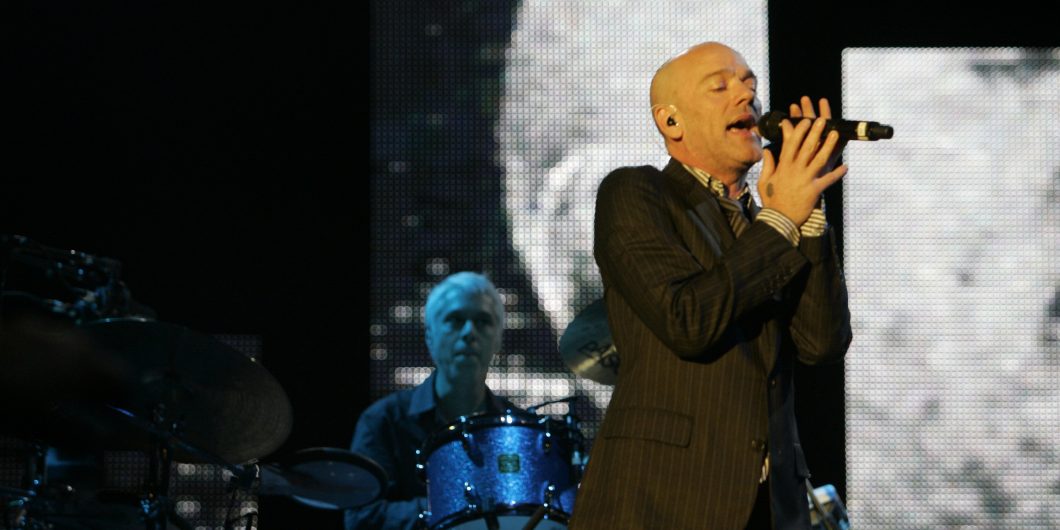 “It’s the End of the World As We Know It” may be the best-known song of the Athens, Georgia band R.E.M. The band often used the piece to close their concerts, and the song was featured in the opening sequences of the movie Independence Day as a night technician at the Search for Extraterrestrial Intelligence facility (S.E.T.I.) in New Mexico is startled by an alert from an unknown alien entity. The song is, at least on the surface, playful, even flippant, but it sums up nicely one of the principal themes of the band that unfolds across forty-nine studio, video, live, and compilation albums. Far from morose, the more the band played the song to live audiences, the more celebratory it became, as is evident at the close of this performance in Wiesbaden, Germany. The closing line to each chorus leaves no doubt that this is a joyous occasion: “It’s the end of the world as we know it/And I feel fine!!!”

R.E.M.’s proclamation is not “It’s the End of the World,” rather, “It’s the End of the World—As We Know It.” There is a big difference. If R.E.M.’s announcement of the “end of the world” is “apocalyptic,” it is only in the literal meaning of the word, namely, an uncovering of things little recognized—some of which may be just emerging. The end of the world is the end of an epoch and the introduction of a new era that may be troubling, but is nonetheless accepted with a confident, even joyous hope, even if its contours are only just emerging. Organizing their wide-ranging catalogue of music in this way provides some insight into the enormous appeal the band has had—and still has—for many around the globe.

For their name, the band chose at random the abbreviation for the dream-state phenomenon “rapid eye movement”; they have sold 90 million albums. In 1996 R.E.M. was granted an $80 million contract with Warner Brothers, at that time a record amount. Lead singer and lyricist Michael Stipe’s distinctive voice makes most of their songs easy to recognize. Mike Mills, on bass and keyboards, claims the inspiration of the Beach Boys, and his pitch-perfect harmonies and stirring descants and counter-melodies should make Brian Wilson smile. Peter Buck uses an open guitar style on a Rickenbacher as a kind of tribute to Roger McGuinn whose iconic 6- and 12-string Rickenbacker guitars made “The Byrds” unique. When Bill Berry’s restrained drumming is added, R.E.M.’s music is far greater than the sum of its parts. All of these musical characteristics are on display in their popular ballad “Man on the Moon” about entertainer Andy Kaufman.

The authorship of all songs was attributed to the entire band who enjoyed three decades of unusual harmony (1980-2011). The amity between, for example, Stipe and Mills, evokes the ideal of friendship Aristotle describes in the Nichomachean Ethics, palpable in this duo performance of the lovely ballad “Nightswimming,” especially as it closes. Stipe identifies as his inspirations the “punk poet laureate,” Patti Smith, and the  English group Radiohead, especially their iconic 1992 song, “Creep.”

What are the indications of this transition from a world “as we know it” to something else? None of them should be surprising, except they are artfully expressed by four precocious young men who dropped out of college and seem to have been the better for it. To begin, one social dynamic that gives rise to our present state is the sheer speed of modern life that leaves no time and energy for reflection. “Accelerate” begins on an ugly, dissonate chord that resonates before the urgent driving song erupts.

The ingenious chorus is songwriting at its best, the singer begging for an escape:

Where is the rip cord, the trapdoor, the key?
Where is the cartoon escape hatch for me?
No time to question the choices I make
I’ve got to find another direction—Accelerate!

The band also seemed to understand the weakening of reasonable discourse and the loss of religion. A colleague of mine reports that he shared an introductory philosophy class with Michael Stipe at the University of Georgia. He recounts,

Whether from petulance or perception, he had a point,  because he succinctly expressed as early as 1980 the self-gratifying, narcissistic, and fruitless habits of the contemporary university. Aimless philosophy, moreover, undermines moral agreement; thus, R.E.M.’s debut studio album “Murmur” (1983) includes a song with a telling title: “Moral Kiosk.” Stipe explained in an interview that he was searching for a concept that suggests an easy place where everyone can get whatever suits them: “It’s so much more attractive/Inside this moral kiosk.”

As political philosopher Allan Bloom explained in 1987, pursuing the truth in the classroom is allowed as long as no one claims to find it. How far we have come! Today students are helpfully advised that there is no truth to pursue.

It should then come as no surprise that meaningful intellectual discourse is scarce. The impulse for “Fall on Me” was the threat of acid rain but as the song developed it took on a broader meaning. The unexpected range of Stipe’s voice is on display as he complains in the second verse:

The chorus of “Fall on Me” is a plaintive intercession to the sky expressing the existentialist anguish of an individual in a world turning unfamiliar.

It is noteworthy that R.E.M. gained international recognition with their Grammy-winning 1991 hit “Losing My Religion.” Although Stipe has commented that the song is more general than just a loss of faith, the theological imagery in the music video, for example, St. Sebastian riddled with arrows, punctuates the song’s religious lament. R.EM., though, does not abandon the possibility of some kind of spirituality.  “Oh My Heart” opens with the possibility of a new belief reconstructed from the previous:

The song “Day is Done” notes the loss of confidence in a guiding benevolence because “Providence blinked, facing the sun.” Whether it is a rising or setting sun, the message is the same: providence—as previously understood and experienced—is inadequate in the epochal change underway. The song, nonetheless, is forward looking, an assumption of responsibility for the future:

This commitment is reiterated in the last verse of  “Oh, My Heart.”

Mother and father, I stand beside you
The good of this world might help see me through
This place needs me here to start.
This place is the beat of my heart.

For R.E.M., an unraveling world should be approached, not so much with grand solutions, but with individuals motivated by something we might call “constructive discontent,” a yearning for something better. The band is by no means glib about the challenges that lie ahead—there are no easy solutions. This is the message of their parody “Shiny Happy People,” in which the band is joined by Kate Pierson of the B-52s, who also hail from Athens. Shallow contrived happiness leads nowhere. Not surprisingly, although the bubble gum tune enjoyed wide appeal in pop culture, Stipe said he hated it. Guitarist Peter Buck once said that “the song is so relentlessly upbeat it makes you want to throw up.”

Confidence in the Future

R.E.M.’s “Find the River,” however, expresses a lifetime of deep unfulfilled longing. It is the last song in what is perhaps R.EM.’s most brilliant album, “Automatic For the People” (1992), which took its title from a humble Athens diner that the band would frequent. “Find the River” is beautifully written, arranged, and performed; and in a then world of mindless MTV, this particular video is artistic, sensitive, and moving. The song reflects Stipe’s penchant for obscure lyrics—often sung obscurely—but even those passages add depth and mystery to the song. Rolling Stone rightly called the song “gorgeous . . . a masterpiece.” The line “I Have Got to Find the River,” is repeated with pathos.

Watch the road and memorize
This life that pass before my eyes
And nothing is going my way.

The melancholy song ends on a hopeful note: “Pick up here and chase the ride/The river empties to the tide/All of this is coming your way.”

The anthem “These Days” is a  buoyant look to the future. The opening verse expresses the need for a new evaluation of priorities:  “I will rearrange your scales/ If I can, and I can” and then launches into a promising view of what is possible:

All the people gather, fly to carry each his burden
We are young despite the years
We are concern, we are hope despite the times
All of a sudden, these days
Happy throngs, take this joy wherever, wherever.

For whatever reasons, many find the idea of apocalypse fascinating and endlessly entertaining, whether in film, literature, or philosophy—it is a genre-bending theme. There are always possibilities on tap to explain the impending doom: carbon emissions, procreation, the collapse of the liberal order, capitalism, or the Second Coming. The common attitude seems to be certainty.

The thrust of R.E.M.’s music, however, is more modest: the group is uniquely, persuasively, and often gracefully, expressing what they see. They warn of no catastrophic collapses. Nor do they offer sweeping solutions, rather they express an unhesitating assumption of responsibility infused with hope. R.E.M. sees no other choice in the face of the irreversible end of an era. Their 1996 song “How The West Was Won and Where It Got Us” is unusual and moody. It is an epitaph for a world gone by in which the proverbial “canary in the mine” has died.

Canary got trapped, the uranium mine
A stroke of bad luck, now the bird has died
A marker to mark where my tears run dry
…
The story is a sad one, told many times
The story of my life in trying times
…
I made a mistake, chalked it up to design
I cracked through time, space, Godless and dry
I point my nose to the northern star,
Watch the decline from a hazy distance

In his ironically titled essay “Why I Am Not A Conservative,” F.A. Hayek offered at least two criticisms of conservatism that may be apt in this context. One, mere nostalgia is not sufficient to meet the challenges of the future. Second, what is needed is imagination and flexibility by which unyielding principles might be artfully applied in the interest of providing the leadership so sorely needed in the days ahead; conservatives should be the vanguard of progress. If Hayek is correct—or even if he isn’t—a group like R.E.M. may provide a unique perspective in their candor, their commitment, and their confident hope for the future. The end of the world as we have known it is not so much an occasion for passive mourning as it is an anticipatory “uncovering” of the future.

Fourth of July Legal History: How Did It Become a

Red Flags: 8 Types of People to Avoid in Christian Dating and Marriage (Proverbs 26:12-28)

A Tale of Two Investigations