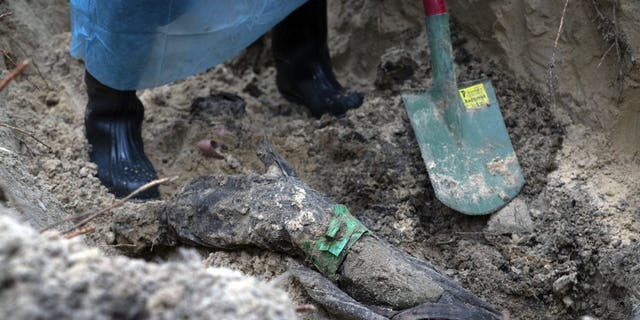 The European Union proposed a plan on Wednesday to set up a specialized court to investigate alleged Russian war crimes committed not only in Ukraine, but against it as a “sovereign state.”

Thousands of investigations have been opened into allegations of war crimes by Western nations and the International Criminal Court (ICC), though not all nations, including the U.S. and Russia, recognize the jurisdiction of the ICC.

However, head of the European Commission, the executive branch of the EU, President Ursula von der Leyen said a “specialized” tribunal with the backing of the U.N. should be established.

Part of a body of a Ukrainian soldier emerges from the ground during an exhumation in the recently retaken area of Izium, Ukraine, Friday, Sept. 16, 2022. Ukrainian authorities discovered a mass burial site near the recaptured city of Izium that contained hundreds of graves.
(AP Photo/Evgeniy Maloletka)

“Russian must pay for its horrific crimes, including for its crime of aggression against a sovereign state,” she said. “Russia’s invasion of Ukraine has brought death, devastation and unspeakable suffering.”

“This is why, while continuing to support the International Criminal Court, we are proposing to set up a specialized court, backed by the United Nations, to investigate and prosecute Russia’s crime of aggression,” von der Leyen added.

The details of the tribunal have not been announced, but reporting Wednesday suggested the specialized court could be based on an international treaty or could reflect a hybrid court that relies on a nation-based legal system that encompasses international justices.

Von der Leyen argued that the tribunal would be able to more efficiently hold the Kremlin accountable and had “the means to make Russia pay” reparations for damages incurred in Ukraine.

However, a mishap by the commission’s president Wednesday pulled some attention from the proposed tribunal when she claimed that “more than 20,000 civilians and 100,000 Ukrainian military officers have been killed so far.”

Civilian casualties in Ukraine remain largely unknown with the U.N. reporting roughly 17,000 casualties since the war began. Though the Office of the High Commissioner for Human Rights warned in its latest update Monday that it “believes that the actual figures are considerably higher,” noting that information on such data has been largely incomplete as fighting and investigations continue.

Civilian deaths from Mariupol alone have been estimated between 10,000 to 21,000 by Ukrainian officials.

Emergency workers move a body during an exhumation in the recently retaken area of Izium, Ukraine, Friday, Sept. 16, 2022. Ukrainian authorities discovered a mass burial site near the recaptured city of Izium that contained hundreds of graves.
(AP Photo/Evgeniy Maloletka)

However, it was von der Leyen’s suggestion that 100,000 Ukrainian soldiers had been killed in the fighting that caused a stir.

Head of the Press Service of the Ukrainian Armed Forces Bohdan Senyk told Ukrainian news outlet Pravda that he could not confirm the statistic provided by the commission’s president.

“We emphasize that the losses of the Ukrainian army are classified information,” he said, though he added that the armed services supports EU action to hold Russia accountable.

The deputy chief spokeman for the European Commission later clarified that von der Leyen was referring to the casualty count, not solely those killed in action.

Ukrainian national guard servicemen carry a bag containing the body of a Ukrainian soldier in an area near the border with Russia, in Kharkiv region, Ukraine, Monday, Sept. 19, 2022. In this operation seven bodies of Ukrainian soldiers were recovered from what was the battlefield in recent months.
(AP Photo/Leo Correa)

“The estimation used, from external sources, should have referred to casualties, i.e. both killed and injured, and was meant to show Russia‘s brutality,” Dana Spinant said in post to Twitter.

Von der Leyen’s statement posted to the EU website was edited to remove the line referring to the 100,000 Ukrainian soldiers killed, and the statement was edited from the video posted to social media.