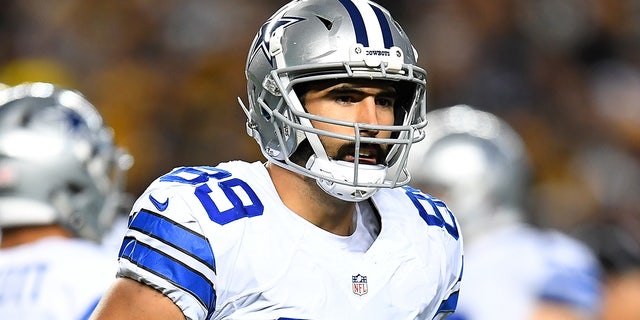 Gavin Escobar #89 of the Dallas Cowboys in action during the game against the Pittsburgh Steelers at Heinz Field on November 13, 2016 in Pittsburgh, Pennsylvania.
(Joe Sargent/Getty Images)

The climbers were identified as 31-year-old Escobar and 33-year-old Chelsea Walsh.

Escobar played in the NFL from 2013 to 2017 for the Dallas Cowboys and Baltimore Ravens. He had 30 catches for 333 yards and eight touchdowns during his career. He ended his football career Alliance of American of Football.

A small amount of rain fell in the area on Wednesday but it wasn’t clear whether they played a factor in the climbers’ deaths. Tahquitz Rock is known for its steep granite cliffs.

Escobar began working for the Long Beach Fire Department in February. He’s survived by his wife and two children.

The fire department, Cowboys and his alarm mater San Diego State sent their condolences on Twitter.

“We are devastated to hear about the passing of Gavin Escobar. Gavin was the epitome of a student-athlete, and a leader on and off the field. Our thoughts and prayers are with Gavin’s family in this incredibly difficult time,” San Diego State AD John David Wicker said in a statement.

Two climbers from Los Angeles fell 200 feet to their deaths on the rock in 2000, according to the Los Angeles Times.

Ryan Gaydos is the sports editor for Fox News Digital.