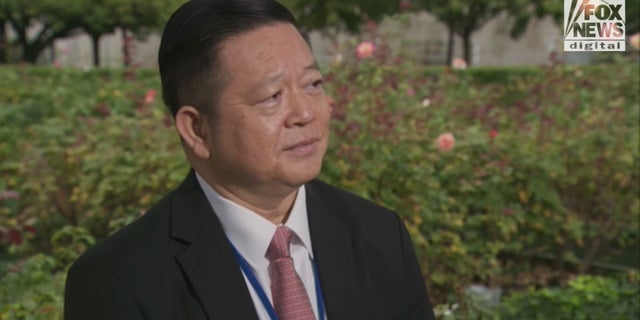 UNITED NATIONS, New York – A top Cambodian official has questioned the logic of China invading Taiwan if Beijing believes the island nation is part of China, while also pushing for peaceful relations in the international security landscape.

“We do not believe that China would invade Taiwan, because China considers Taiwan as part of China,” Dr. Kao Kim Hourn, delegate attached to the prime minister of Cambodia and soon-to-be Secretary-General of ASEAN, told Fox News Digital in an exclusive interview. “Why would it invade Taiwan?”

Dr. Kao stressed that Cambodia, his homeland, as well as other members of the economic trading block ASEAN, wish to see peace in the region and would like to “give diplomacy a chance” to resolve any potential disputes over Taiwan.

CHINA HAS OPENED OVERSEAS POLICE STATIONS IN US AND CANADA TO MONITOR CHINESE CITIZENS: REPORT

“Cambodia, like other countries, we are a peace–loving nation,” Dr. Kim explained. “Cambodia has gone through war, conflicts and genocide. We certainly are strong advocate[s] for peace, negotiations and diplomacy. At the end of the day, everything has to deal with diplomacy, and that’s what we want to do.”

Dr. Kao recently won election as the secretary-general of ASEAN, a 10-nation trade bloc in South East Asia that comprises the third-largest economic power in Asia after China and India. He is the first Cambodian to hold the position, and he is keen to pursue his philosophy of peace as he navigates the complicated economic situation that has developed on the continent.

South East Asia produces a significant amount of rice, exporting roughly 30% of the world’s supply, according to data from the OEC – approximately equivalent to the amount of grain Russia and Ukraine export in a given year.

The Russian invasion of Ukraine has disrupted food supplies and exports that threaten to create “multiple famines,” according to the United Nations Secretary-General Antonio Guterres. That crisis has presented an opportunity for ASEAN to capitalize on its rice exports and step up to help avert – or at least ease – the problem.

But Dr. Kao stressed that even as ASEAN tries to help with food security concerns, it faces its own hurdles, thanks to inflation and the rising cost of energy, which could hinder some efforts to harvest and export its food.

“We [have] a number of countries … producing and also exporting — Cambodia, Vietnam, Thailand, among others,” Dr. Kao said. “Certainly, we are playing our role to support the food security that has been impacted heavily by the war in Ukraine and the challenges of cost by [the] energy security crisis.”

But the war in Ukraine shows no signs of slowing down, which can only lead to further problems in the coming months: Russian President Vladimir Putin ordered a partial mobilization, which kicked off a draft to help swell the ranks of the Russian army as it faces greater difficulty in its offensives.

Putin also renewed his threat to use nuclear weapons in case Russia were to feel that other nations intended to attack it.

Dr. Kao urged Russia and other aggressive countries to “learn from history” and take “wisdom” from past transgressions in order to avoid using nuclear weapons “at all costs.”

“I hope that history would not repeat itself,” Dr. Kao said, pointing out that the atomic bombs dropped on Japan by the United States in World War II should serve as “major lesson” on the use of those weapons.

“I think in this world at this time, the last thing we need is … any country to use nuclear weapons.”

“We have to work together to combat … terrorism, extremism and violence, and we believe that the message of love and kindness, of course, of helping those who are really [in] need,” he said.

God Showed me his Plan for Mankind – Now I KNow