The Federal Bureau of Investigation has arrested and charged 19-year-old Alejandro Richard Velasquez Gomez, who goes by the online personality of “LatinoZoomer” online, for allegedly planning to commit a terrorist attack at a Turning Point USA event in Florida.

Velasquez has been charged with making threatening interstate communications by San Antonio FBI and charged by Tampa police with making written or electronic threats to kill, do bodily injury, or conduct a mass shooting or an act of terrorism.

Additionally, prosecutors charged Velasquez with possession of child pornography after investigators found images of children being sexually exploited by adults on his phone.

According to federal anti-terrorism agents, Velasquez made a credible threat against participants of the TPUSA Student Action Summit in Tampa, Florida, which took place in late July, and that he planned to carry out the attack.

“July 22 is the day of retribution the day I will have revenge against all of humanity which all of you will pay for my suffering,” wrote Velasquez Gomez in a post on chat service Discord, which he screenshotted and reposted on his Instagram account, FBI agents in San Antonio said.

“SAS will be the turning point of the LatinoZoomer lore,” wrote Velasquez, referring to the Student Action Summit in Tampa. 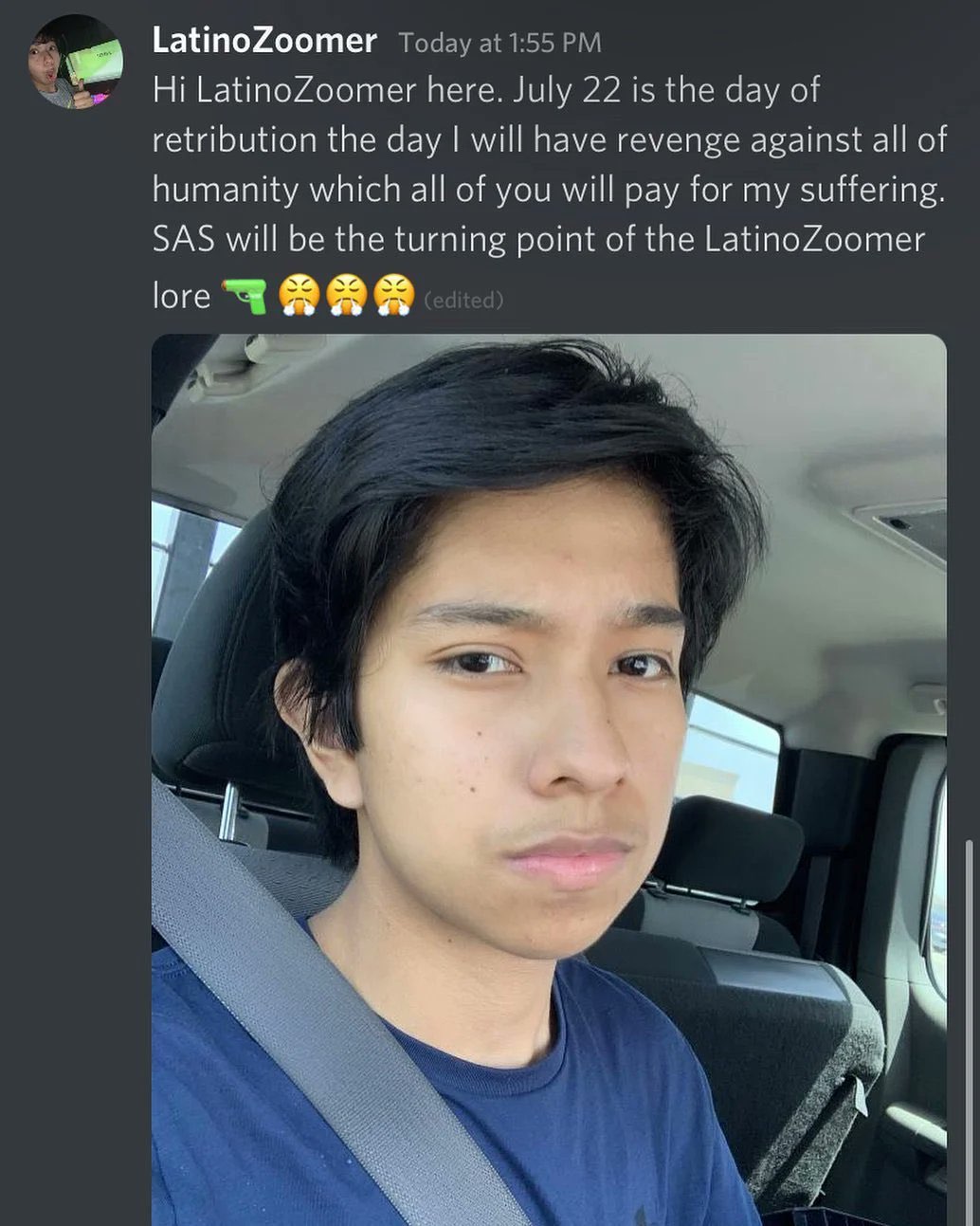 FBI agents found that Velasquez booked a flight from Austin to Tampa on July 22 but canceled it at the last moment.

As detailed by the San Antonio Express News, the FBI office in Phoenix, Arizona alerted their counterparts in San Antonio to Velasquez’s online threats.

It was not immediately clear why Velasquez would target the conservative student group. Most of his social media accounts have been canceled or removed for violating the sites’ rules.

However, a YouTube video exists in which Velasquez is portrayed as among those following Nick Fuentes, the far right youth activist, as Fuentes tried to access Turning Point’s student summit in the summer of 2021. Turning Point organizers said they attempted to ban Fuentes and his followers, the so-called “groyper army,” according to a story in Salon.

The criminal complaint affidavit, filed by the FBI, linked Velasquez to the “incel” movement, which is made up almost entirely of young men who blame women for their sexual frustration.

The FBI Joint Terrorism Task Force in San Antonio identified Velasquez by his online profiles “LatinoZoomer” and “MestizoZoomer,” and noted that his social media posts bore strong similarities to those made by Elliot Rodger, an incel who went on a killing spree in Santa Barbara in 2014.

In addition to the Discord posts, Velasquez posted a video on Instagram of himself in a car, which the FBI said bore strong similarities to the infamous “Elliot Rodger’s Retribution” video posted by the Santa Barbara shooter.

In the affidavit, the FBI agent describes Rodger as a symbol for the “incel” movement, which endorses violence against women. Members of the movement have been responsible for at least eight instances of mass violence, the New York Times reported in 2019.

A further high-profile attack was committed by a member of the movement in 2021 who went on a shooting spree following an argument with his mother in Plymouth, England.

Velasquez, who was arrested by San Antonio police on July 22, was denied bail following a hearing this week and remains incarcerated.

T.D. Jakes Sermons: This is Not the Time to Lose Your Head

JMCIM Combine Youth and Singles Choir ” What A Beautiful Name”