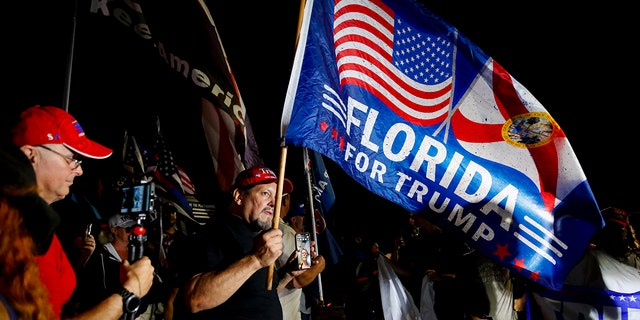 Trump was in New York City while his home in Palm Beach, Florida, was raided.

A source familiar with the raid told Fox News the warrant for the raid was related to the National Archives and Records Administration effort to collect records and materials the former president took with him from Washington, D.C., to Mar-a-Lago.

“This was a NARA issue,” the source close to the former president told Fox News, adding Trump has been “cooperating.”

“There is no need for any of this,” the source said, adding the FBI “wouldn’t let the attorneys come in to watch the raid. They told them to leave.”

The source told Fox News that when NARA visited Mar-a-Lago in February, Trump and his team “gave them what they wanted.”

“It was all provided to them,” the source said. “This is absurd.”

NARA notified Congress in February that the agency recovered the 15 boxes from Mar-a-Lago and “identified items marked as classified national security information within the boxes.”

NARA describes itself as “the nation’s record keeper.”

“Of all documents and materials created in the course of business conducted by the United States federal government, only 1%-3% are so important for legal or historical reasons that they are kept by us forever,” the NARA website states.

According to a 2017 memorandum issued by the White House counsel’s office under the Trump administration, “any employee who intentionally fails to take these actions may be subject to administrative or even criminal penalties.”

“The National Archives did not ‘find’ anything, they were given, upon request, Presidential Records in an ordinary and routine process to ensure the preservation of my legacy and in accordance with the Presidential Records Act,” Trump said in a February statement, adding that Democrats “are in search of their next scam.”

The matter was referred to the Justice Department by NARA.

An FBI source confirmed that FBI agents from Washington, D.C., on the bureau’s Evidence Response Team conducted the raid and notified the Miami Field Office just before doing so.

A separate source familiar with the raid told Fox News agents brought a “safe cracker” and cracked a “relatively new” safe in Mar-a-Lago but found “nothing in it.”

Another source told Fox News FBI agents went to Mar-a-Lago and looked in every single office and safe and grabbed documents and boxes without going through them on the property. They took boxes and documents to go through them later.

“They were not being judicious about what they took,” that source told Fox News.

Trump made the raid public Monday evening, saying in a lengthy statement, “Nothing like this has ever happened to a President of the United States before.

“After working and cooperating with the relevant Government agencies, this unannounced raid on my home was not necessary or appropriate,” Trump said. “It is prosecutorial misconduct, the weaponization of the Justice System, and an attack by Radical Left Democrats who desperately don’t want me to run for President in 2024, especially based on recent polls, and who will likewise do anything to stop Republicans and Conservatives in the upcoming Midterm Elections.

“Such an assault could only take place in broken, Third-World Countries. Sadly, America has now become one of those Countries, corrupt at a level not seen before.

“What is the difference between this and Watergate, where operatives broke into the Democrat National Committee? “Here, in reverse, Democrats broke into the home of the 45th President of the United States.”

“President Trump and his representatives have gone to painstaking lengths in communicating and cooperating with the appropriate agencies — something that is routine for all similar instances,” Budowich said. “These disgusting actions by Joe Biden’s administration would make a third-world dictator blush.

“However, in the Democrats’ desperate attempt to retain power, they have unified and grown the entire conservative movement.”

The White House maintained it was given no advance notice of the FBI’s raid on Mar-a-Lago and said President Biden learned of it through public press reports “just like the American people.”

Brooke Singman is a Fox News Digital politics reporter. You can reach her at Brooke.Singman@Fox.com or @BrookeSingman on Twitter.