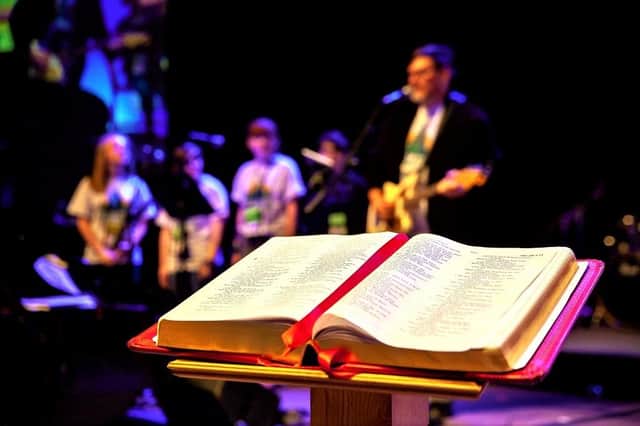 Despite the ‘sweeping’ nature of the prosecutors’ claim about citing the Bible in public, the case has been almost totally ignored by the UK media

Evangelical activist David Smyth and barrister Gavin Millar were reacting to a little-noticed statement from the Crown Prosecution Service (CPS), made during a recent attempt to prosecute a street preacher.

Meanwhile, there has been no response at all from the major churches to the news, either in England or Northern Ireland (see below).

The story all stems from a confrontation between a man called John Dunn, a soldier-turned-evangelist, and two lesbians.

It took place on the streets of Swindon two years ago.

Mr Dunn was charged with using “threatening or abusive words or behaviour, or disorderly behaviour within the hearing or sight of a person likely to be caused harassment, alarm or distress thereby”.

It was alleged he shouted that the women would “burn in hell” and called one of them a “devil woman”.

Mr Dunn denied this, though his lawyers at the Christian Legal Centre said he acknowledged telling them: “It says in the Bible that homosexuals will not inherit the kingdom of God”.

According to Mr Dunn’s lawyers, the case against him was discontinued during this week because the complainants could not be reached.

While pressing their case against him though, the CPS made the following argument, in writing, to the court:

“Whether a statement of Christian belief or not, the court is being asked to consider whether the language has the potential to cause harassment, alarm or distress.

“This document is not the forum for religious debate, but the bible contains other material recognising slavery (Exodus 21:7), the death sentence (Exodus 35:2 and Leviticus 24:16) and cannibalism (Deuteronomy 28:27).

“There are references in the bible which are simply no longer appropriate in modern society and which would be deemed offensive if stated in public.”

The lobby group Christian Concern, which works in tandem with the Christian Legal Centre, issued statements about this case to the press in the past week, but there has been virtually no media coverage of it, despite its potentially far-reaching implications.

Whilst the CPS handles prosecutions only for England and Wales, the arguments it advances and precedents it sets could be influential in other jurisdictions too.

David Smyth, head of the Evangelical Alliance in NI, said: “The CPS holds a really important role in the public life and administration of criminal justice in England and Wales.

“However it is not their role to govern what is ‘appropriate’ or ‘offensive’.

“These comments are unwise and concerning, revealing a lack of understanding and faith literacy.

“We hope and pray that this does not result in a chilling effect on Christians sharing the Bible and their faith in public.”

Meanwhile Gavin Millar KC, a barrister at Matrix Chambers in central London who practices in Northern Ireland and specialises in freedom of speech law, told the News Letter:

“Both at common law and under the freedom of expression provision in the European Convention on Human Rights (Article 10), it is envisaged that the right to free speech should be exercised responsibly.

“If it is not, the right can be restricted.

“But context is everything in deciding whether the right is being exercised responsibly. You need to assess everything that the person was saying on that occasion, to whom it was said, and why.

“Also, the value of the speech has to be assessed in specifics, not in the general terms of this paragraph in the skeleton.

“This bare, and rather sweeping, statement about passages in the bible is ill-judged because it does not recognise this.

“In relation to responsible speech, the passages could be read out or referred to in public in a way/context that is not at all offensive – for example in an academic or religious discussion of whether the sentiments in these passages are defensible in this day and age, or how they might be reinterpreted or understood to mean something that is not offensive in modern terms.

“Or in a historical discussion about slavery, that passage could be cited as one that would have informed pro-slavery views in the past.

“In relation to content there are obvious differences between them.

“Someone could, for example, argue for the return of the death penalty as part of a legitimate political debate (and people do though it is increasingly rare these days) citing that passage in the bible in support of their opinion.

“This would have a value as political speech in a democracy.”

The News Letter asked Northern Ireland’s prosecution agency, the PPS, if it shares the CPS’ view of the Bible.

It responded: “This is not a PPS case so we are not in a position to provide comment.”

The criticisms made by Mr Smyth and Mr Millar were put to the CPS, but it did not respond.

The News Letter also asked the following churches to comment, but none did:

The Presbyterian Church in Ireland (no reason specified);

The Church of Ireland (“as a matter of protocol, we would not generally comment on cases in jurisdictions covered by other churches”);

The Irish Catholic Church (the central press office only responded mid-afternoon on Friday, referring the News Letter to the diocese of Down and Connor, which said it might respond at a later date);

The English Catholic Church (“as this case didn’t result in a conviction, there is nothing we can add at this point”);

and the Church of England (“I don’t think we would have anyone who could comment on this from Church House” – the CoE’s HQ).

– CPS MIXES UP ITS BIBLICAL QUOTES –

The references to the Bible made by the CPS in its argument to the court all come from the Pentateuch, the oldest segment of the Old Testament.

These are the specific verses the CPS suggests are now unquotable:

And Deuteronomy 28:27 on cannibalism.

The exact wordings of each are below (in NIV translation) – though, as you can see, the last one cited by the CPS is actually a mistake:

Exodus 21 sets out the rules for ownership of both “servants” and “slaves”, including how they are to be treated and how long they have to serve their masters.

Verse 7 onwards says: “And if a man sells his daughter as a servant, she is not to go free as the menservants do.

“If she is displeasing in the eyes of her master who had designated her for himself, he must allow her to be redeemed.

“He has no right to sell her to foreigners, since he has broken faith with her. And if he chooses her for his son, he must deal with her as with a daughter.”

Exodus 35:2 says: “For six days, work is to be done, but the seventh day shall be your holy day, a day of sabbath rest to the LORD. Whoever does any work on it is to be put to death.”

And Deuteronomy 28:27, which the CPS claims is about “cannabalism”, actually says: “The Lord will afflict you with the boils of Egypt and with tumors, festering sores and the itch, from which you cannot be cured.”

The CPS may have been thinking of Deuteronomy 28:53, which warns about the punishments which enemies will inflict if God’s commands are ignored.

It says: “Because of the suffering your enemy will inflict on you during the siege, you will eat the fruit of the womb, the flesh of the sons and daughters the Lord your God has given you.