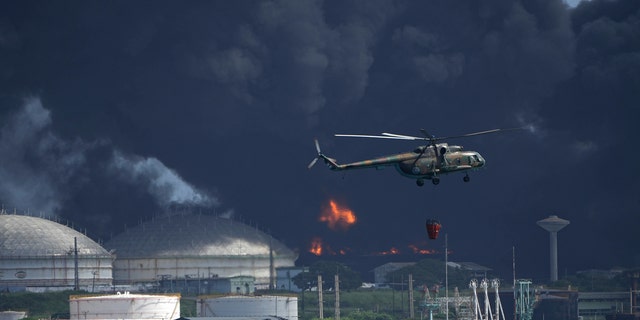 A fire set off by a lightning strike at an oil storage facility in Cuba killed one unidentified person and left 121 others injured, including five in critical condition, Cuban authorities said Saturday.

The Matanzas Supertanker Base in the Cuban city of Matanzas endured explosions and uncontrolled flames started during a Friday night thunderstorm. Authorities said the blaze left 17 firefighters missing.

About 800 people were evacuated from the Dubrocq neighborhood closest to the fire.

Cuban officials said they had asked for assistance from international experts in “friendly countries” who have experience in the oil sector.

TENNESSEE HOUSE CATCHES FIRE, NEIGHBORS USE TRAMPOLINE TO SAVE OCCUPANTS

A helicopter carrying water flies over the Matanzas Supertanker Base, as firefighters try to quell the blaze which began during a thunderstorm the night before, in Matazanas, Cuba, Saturday, Aug. 6, 2022.
(AP Photo/Ramon Espinosa)

Deputy Foreign Minister Carlos Fernández de Cossío said the U.S. had offered technical help to put out the fire. He wrote on Twitter that the offer “is in the hands of specialists for the due coordination.”

A huge plume of smoke rises from the Matanzas Supertanker Base, as firefighters work to quell a blaze which began during a thunderstorm the night before, in Matazanas, Cuba, Saturday, Aug. 6, 2022.
(AP Photo/Ramon Espinosa)

According to the official Cuban News Agency, lightning struck one tank, setting off a fire that later spread to a second tank. Military helicopters flew overhead pouring water on the fire while a dense column of black smoke rose from the facility and spread west more than 62 miles toward the city of Havana.

Roberto de la Torre, head of fire operations in Matanzas, said firefighters were spraying water on intact tanks in an effort to keep them cool to try and prevent the fire from spreading any further.

Members of the Cuban Red Cross prepare to be transported to the Matanzas Supertanker Base, where firefighters work to quell a blaze which began during a thunderstorm the night before, in Matazanas, Cuba, Saturday, Aug. 6, 2022.
(AP Photo/Ramon Espinosa)

The fire comes amid fuel shortages in the country. It remains unclear how much oil was burned or was in danger at the storage facility, which holds eight giant tanks of oil used to fuel electricity generating plants.

Sisters Urgent Prophetic Dream: Pray for the children of the world