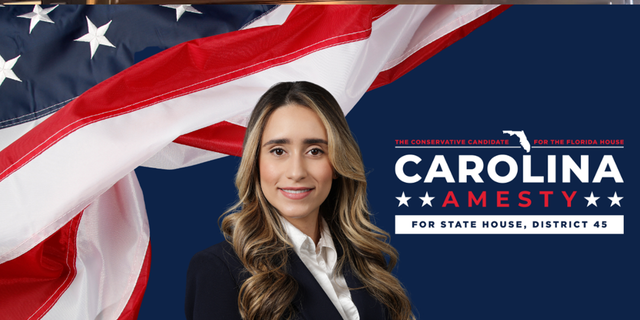 Republican Carolina Amesty, who is running for State House in Florida’s District 45, is hardly alone in believing two of her role models, former President Trump and Florida Gov. Ron DeSantis, R., don’t get a fair shake from the press.

The 27-year-old Amesty was actively involved in Trump’s 2020 re-election campaign and even met her fiancé, Jay Rosario, at an America First event. That same year, Republican National Committee Chairwoman Ronna Romney McDaniel recognized her as a rising star in the GOP.

A banner for Carolina Amesty, who is running for State House in Florida’s District 45 as a Republican candidate.

While campaigning with the former president, Amesty learned firsthand what to expect from the mainstream media once she embarked on her own political career.

“I remember the team just talking about everything the media was doing, and then now being myself on the campaign trail, I’ve seen it myself. They just change, they spin… there is not a fair share when it comes down to media for conservatives,” Amesty said.

“You know, I’m seeing it across even social media platforms. I had an ad on Facebook, and it said America First, it was a picture of me, myself and President Trump, and they just they didn’t approve the ad,” she continued. “The question is, why? It has all the regulations, it’s just me. I’m saying I’m an America-first conservative, and they didn’t approve the ad. So, I’m seeing it right now. Now, living it, boots on the ground, not just hearing it and seeing it as an outsider, but now being inside the campaign trail.”

Amesty says she is committed to supporting DeSantis if he’s re-elected, and she is a faithful admirer of the Republican governor. She feels DeSantis, like Trump, has been unfairly vilified by the press, and she believes he’s a target simply because of his conservative values.

“I think it’s astonishing that, you know, CNN and all these far-left media outlets, they just spin the story,” she said, citing DeSantis’ views on abortion and parental rights on education as issues that she feels have been dishonestly covered.

DeSantis famously feuded with the Walt Disney Company over the Parental Rights in Education bill that banned Florida school employees from giving classroom instruction on “sexual orientation” or “gender identity” in kindergarten through third grade. The left, including much of the mainstream media, dubbed it the “Don’t Say Gay” bill and falsely claimed it banned any discussion pertaining to being gay in the state’s schools.

“The governor was not targeting the LGBTQ community. You know, that community has a space in our great state. We’re very welcoming. You know, we stand for all the community. We love people. It was pretty much just saying, ‘Hey, don’t indoctrinate our kids,’” Amesty said.

“Kindergarten to third-graders should not be learning about gender-neutral, gender ideology, LGBTQ ideology. It’s just not the time and place,” she said. “The media is just attacking the governor, making him look like this anti-gay person, which is not the scenario. We’re just protecting our little ones.”

While Amesty has campaigned for Trump and openly admires DeSantis, she has a preference when it comes to the 2024 presidential election. The pair of Florida-based Republicans are seen as the frontrunner to head the GOP ticket, if they decide to run, but Amesty has a plan that would benefit everyone involved.

“I think our governor is doing an amazing job, and I would be saddened to lose him here in the state of Florida. So, I hope our governor runs for president perhaps in 2028. I think President Trump will be running in 2024, and I look forward to jumping on the Trump train towards his victory for reelection,” she said.

Are You Ready with Wayne “Levi” Price

Minister GUC – All That Matters (LIVE)

Are You Ready with Wayne “Levi” Price

Minister GUC – All That Matters (LIVE)

Automatic Bot - December 8, 2022 0
The Clemson Tigers have already received a verbal commitment from one of the top recruits of the 2023 class, but that hasn’t stopped...
Go to mobile version