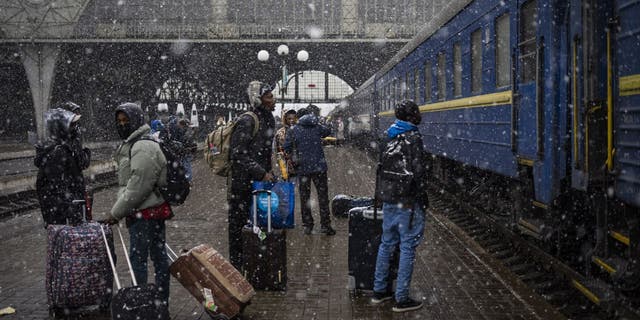 Foreign residents of Ukraine who successfully evacuated the country amid the ongoing Russian attacks on Ukraine are asking embassies for help while they assist other ex-pats with their own escapes from the war-torn country.

The show of resilience, however, comes amid reports of racism and discrimination, which some African, Asian and Latin American evacuees have claimed, according to the Associated Press. That situation that has drawn criticism from international organizations, the Associated Press also reported.

Officials from the United Nation’s International Organization for Migration (IOM) wrote in a statement that there have been “verified credible reports of discrimination, violence and xenophobia against third country nationals.”

Some reported incidents appear to have been documented on social media under trending hashtags such as #AfricansInUkraine, #AsiansInUkraine, #LatinosInUkraine and #POCinUkraine — where foreign evacuees have relayed both the positives and the negatives they’ve experienced while exiting Ukraine.

FOREIGNERS TRAVEL TO UKRAINE TO FIGHT AS MORE THAN 1.3M FLEE THE COUNTRY

Videos of foreign evacuees being blocked from entering trains and buses have garnered viral attention.

“Discrimination on the basis of race, ethnicity, nationality or migration status is unacceptable,” the IOM wrote on Thursday. “Protection and assistance must be provided in a non-discriminatory and culturally appropriate manner to all conflict affected people.”

Alexander Somto Orah, 25, a Nigerian student who was studying in Ukraine, told the Associated Press that Ukrainian border guards separated African and Indian evacuees from the larger group and tried to redirect them to the Romanian border, where they’d have to travel several hundreds of miles in freezing temperatures.

“I was putting students in groups, with boys leaving first, so as to give feedback to the rest of the students on whether it was safe.”

“They told us that if we try to push our way through, they are going to shoot us,” Orah recalled to the Associated Press. “We raised our hands and told them we are students and just want to go home.”

Orah now has reportedly settled in Poland’s capital city of Warsaw; he returns to the Poland-Ukraine border to help other foreigners exit Ukraine.

Similarly, a woman named Faith Chemari has been helping foreign evacuees from a distance by coordinating bus travel from Ukraine to Poland, the Associated Press reports.

“I was putting students in groups, with boys leaving first, so as to give feedback to the rest of the students on whether it was safe,” she told the news outlet.

Azerbaijan student Elxan Salmanov Ilham, 28, told the Associated Press he received help from Azeri nationals in Odesa, who helped him “get to the Moldova border” after he fled Kharkiv.

Foreign embassies are continually advising international evacuees to reach out to their nearest respective embassy for assistance whether they’ve made it out of Ukraine or not.

UKRAINE ASKS TWITTER USERS TO SPAM RUSSIA WITH THOUGHTS ON THE WAR: ‘TELL THEM WHAT YOU THINK’

Thousands of foreign residents are still stuck in Ukraine as Russia continues to shell Ukrainian cities.

This past Friday, some 700 Indian students were trapped in Sumy, a city in the northeast of Ukraine, Reuters reported.

Mahtab Raza, one of the students stuck in Sumy, shared a video on social media asking the Indian government for help; his group has had no food or running water in the hostel where they’ve found shelter. Raza said shelling, frigid temperatures and snipers on surrounding roofs have thwarted evacuation attempts, Reuters reported.

Ojonugwa Zakari, 21, a Nigerian medical student who’s also stuck in Sumy, told the Associated Press that foreigners and locals are receiving war alerts and evacuation guidance on their cell phones.

“It’s no longer about where people are from,” she told the news agency. “People are just trying to make sure that if you’re a foreigner in Ukraine, you get to safety.”

Dmytro Kuleba, the agency’s minister, shared a tweet on Wednesday, March 2, that said the ministry is “working intensively to ensure their safety & speed up their passage.”

In an attached video, the ministry said checkpoints on the western borders are open 24 hours a day and will operate on a “first-come first-served approach applied to all nationalities.”

“All people at the border are asked to comply with law and order and to act responsibly,” the video continued. “This will allow [us] to speed up the border crossing process. We ask that those crossing show mutual respect and understanding to everyone at the border during this extremely difficult time.”

Resources on the Ukrainian Ministry of Foreign Affairs website weren’t accessible on Sunday afternoon, as it appeared to be down.

The Ukrainian national flag is seen in front of a school which, according to local residents, was on fire after shelling, as Russia’s invasion of Ukraine continues, in Kharkiv, Ukraine, Feb. 28, 2022, four days after the Russia-Ukraine war began.
(REUTERS/Vitaliy Gnidyi)

Population data on the Vatican Dicastery for Promoting Integral Human Development Migrants-Refugees website estimated there were 285,000 foreigners living in Ukraine out of a population of about 42 million (pre-war).

The IOM reports that more than a million people have fled Ukraine, and it expects more to leave as the war goes on.

The total number of casualties from the Russia-Ukraine war is currently unknown.

There has been one confirmed death of an international student.

Naveen Shekharappa Gyanagoudar, 21, an Indian medical student, was killed by shelling in Kharkiv on Tuesday, March 1, according to a report from the India Times.

The Associated Press and Reuters contributed to this report.